Focusrite's new ISA828 eight-channel microphone preamp might be viewed as the 'grown-up' equivalent of the Focusrite Octopre and, indeed, it could be used as exactly that. However, it is far more versatile and more highly specified than its Platinum pal, incorporating eight ISA transformer-based preamps, with circuitry based on the original Rupert Neve design used in the well-regarded Forte console, and subsequently in the ISA430 Mk2 and ISA428 preamps.

On the input stage, this circuit still uses the same high-spec Lundahl L1538 audio transformer and Rupert Neve's Zobel filter network. The aforementioned type of network is more usually associated with the speaker outputs of power amplifiers, to compensate for the inductive load of the speakers, but here it compensates for the inductance of the input transformer. All this fits into a mains-powered, 2U chassis.

Even discounting the optional digital capabilities included with the review model, the ISA828 provides the most cost-effective 'per channel' means of buying this particular design of preamplifier.

In many practical respects, the ISA828 is akin to an eight-channel version of the ISA428, but there are actually several differences, many of which were necessary to make the ISA828 fit into the same size of chassis as the ISA428, while at the same time offering double the channel count.

Like the ISA428, this unit is surprisingly heavy. The heat sink at the rear adds to the already substantial depth of the case, but it is an essential component, as, even when used on a desktop rather than in an enclosed rack, the ISA828 gets pretty warm. The front-panel is styled in the familiar blue, yellow and grey livery of the ISA range, with small but clearly-printed legending, illuminated buttons and small, console-style plastic knobs. Unfortunately, though, as soon as the panel LEDs light up, the legend becomes virtually unreadable in typical studio lighting.

Only the (unbalanced) instrument inputs are on the front panel. All other connections are on the rear, with line inputs on balanced TRS jacks rather than XLRs, to save space.

At the time of the review, the 828 A-D converter card was not available (it should be by the time you read this review), so a similar 428 card was fitted instead. The functionality of the two cards is practically the same: they both provide eight channels of A-D conversion at 192kHz; they can be retrofitted to the ISA828; they can be connected to most recording systems via AES/EBU, S/PDIF or ADAT lightpipe; and internal clocking frequencies of 44.1, 48, 88.2, 96, 176.4 and 192 kHz are available, with external locking from word clock or 256x Super Clock.

However, according to Focusrite, the 828 card will have a higher technical specification. It is apparently based on higher-quality converters, with noise performance better than -122dBFS, and an ultra-low-jitter clock. Focusrite also confirmed that it will have a 25-pin, D-type connector (the 428 card uses a pair of nine-pin connectors), and different choices of output configuration via jumper links, including the ability to disable AES outputs 5-8 specifically for Pro Tools compatibility. All this adds up to a convenient means of direct connection to Pro Tools HD systems.

A push-switch selects one- or two-wire mode, for connecting the AES signal at high sample rates. The adjacent button enables you to choose between S/PDIF and AES/EBU. The dual-wire AES mode is used for connecting to older equipment that can only work above 96kHz by employing both channels of a single AES/EBU connection (an approach that halves the number of channels that can be sent for a given number of connectors at higher sample rates). A whole page of the manual is dedicated to showing what appears on which connector for each of the jumper permutations, so I won't attempt to describe them all here, and in any event the new 828 card isn't available yet to confirm their operation.

When fitted with the optional 828 digital card, the ISA828 provides the user with extensive connectivity options, and it is worth summarising them here. At 48kHz or below the eight channels can be output simultaneously as AES/EBU, S/PDIF and on both sets of ADAT ports. At 88.2kHz or 96kHz you can still have both AES/EBU and SPDIF, providing the single-wire AES/EBU format is being used, while the two ADAT ports carry the eight channels between them in SMUX format. At 176.4kHz and 192kHz the ADAT channel count drops to four, again using both ports, this time under the SMUX IV protocol. The analogue outputs are always available on a 25-pin D-type connector, wired to the Tascam/Pro Tools protocol, which means that ready-made cables are easily available. A further D-type connector provides the means to feed external signals into the converters, while the digital outputs are available via the AES/EBU outputs (presented as a pair of 9-pin D-Subs on the review model, but a single 24-pin D-Sub on the production version of the card) and the pair of ADAT-format optical outputs.

The microphone input is fed from a balanced XLR on the rear panel, where phantom power is individually switched for each channel. To cater for the current taste for variable-impedance mic inputs, four impedance operations are available, selected via the 'Z In' button, which steps between the four options, with a status LED to indicate the current selection. As with the ISA428, one of these is marked as conforming to the original ISA110 setting (1.4kΩ), with the other three being newly added options at 600Ω, 2.4kΩ and 6.8kΩ.

Exactly how different impedance settings interact with different mics isn't always predictable but, as a rule, because the higher impedances load the mic less, there's a little more level, and the natural humps and bumps in the mic response (due to the way its output impedance varies with frequency) may be less obvious than at lower impedance settings. Ribbon mics are particularly susceptible to loading effects, but I noticed a slight increase in gain and brightness even with transformerless capacitor microphones. 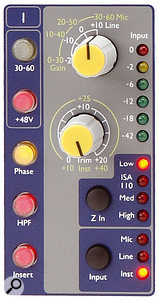 Four impedance options are available for the mic inputs on each channel, and are selected via the 'Z In' button.Photo: Mike CameronThe switchable high-pass (75Hz, 18dB/octave) filters used in the preamps conform to the original design, and there's the usual phase button, as well as a gain-range switch to select between a maximum coarse gain range of 30dB or 60dB. Gain is set using two rotary controls, the upper one being a stepped gain-range switch that can provide up to 60dB of gain in 10dB increments, and the lower one a continually variable 20dB control, so that the maximum overall gain can be as high as 80dB. This high gain is, again, useful for less sensitive dynamic and ribbon microphones.

Four of the channels also feature high/low impedance switching, along with the four unbalanced instrument jack inputs that are located at the extreme left of the front panel. Conveniently, if you use guitars or basses fitted with passive magnetic pickups, this layout enables the channels to be used as high-performance DI boxes. Front-panel insert switches are available on every channel, and these allow an external processing device to be inserted between the D-Sub analogue outputs and the D-Sub analogue inputs. When a digital card is fitted and an insert switch is pressed, the ADC rear-panel input is routed to the card, so your inserted device affects the signal prior to conversion, but after the preamp stage when it has been boosted to line level.

Each channel has its own six-LED level meter. The meter-trim calibrations can be adjusted by the user to match different DAW systems, but the default setting shows 0dBFS at a level of +22dBu and -18dBFS at +4dBu. Trim controls allow 0dBFS to be set over the range +10dBu to +26dBu.

Electrically, the specification is impressive but, as always, it tells you little about the actual sound of the preamps. The equivalent noise is -126dB, measured at 60dB of gain (150Ω source). Many cheaper bits of equipment can match this figure but, more importantly, the noise figures of the ISA828 are good over the range of gain settings that would be used in a typical session. The frequency response is only 3dB down at 85kHz at maximum gain, with a 16Hz lower limit, while the THD figure at 30dB gain is a very low 0.0008 percent (1kHz test signal).

The sound of the ISA preamp is just on the flattering side of neutral, and might best be described as solid and subjectively transparent, with no harsh edges but, at the same time, no lack of high-end detail. As well as handling vocals with ease, the preamp also does justice to harmonically complex sounds, such as acoustic guitar and percussion, not least because of the generous headroom and low distortion afforded by the circuitry — though the wide audio bandwidth is also important, as it minimises phase distortion within the audio band. Having inserts on every channel is a useful addition, and the digital interface (when fitted) offers a lot of connectivity options, as well as a high technical specification. Some transformerless designs may offer a marginally more extended low end, but what the ISA design manages to do is produce a sound that sits well in a mix.

The rear panel of the ISA828 hosts all the mic and line inputs. The review model was fitted with the optional card that provides the digital connectivity.Photo: Mike CameronIt is less easy to judge the quality of the converters, as once you get beyond a certain quality level the differences become progressively more difficult to identify by ear. The 428 card that was fitted clearly works extremely well, so if the new one improves on that in any significant way it should be impressive. The ADAT output provides a practical way of connecting to the many project-studio audio interfaces that have ADAT ports. Not all interfaces support the high sample-rate SMUX formats, though, so you may need to use a different connection system or change your interface if you want to make use of the higher sample rates. Even working at 44.1kHz via the ADAT input of my MOTU 828 MkII, the sound was very evidently first class, which is exactly what you'd expect from a pedigree preamp teamed with a very capable converter.

With its Rupert Neve heritage, the ISA preamp — in its various guises — is a popular piece of kit, and is used in many top studios around the world, so it doesn't really need any help from me to establish its credentials. What the ISA828 offers is a very cost-effective way of adding eight channels of ISA preamp to any studio system, with the highly-specified digital output card available as an option, which means you don't have to pay for it if you don't need it. Having to buy cables to mate with the D-Subs is a minor inconvenience, but it is more than made up for by the space-saving format and does benefit Pro Tools HD users. Because the price is so attractive, those project-studio owners prepared to spend a little more on quality equipment can now afford to add truly professional, transformer-input preamps to their own systems.

There are so many good mic preamps around at the moment that listing alternatives could take up a whole page. However, if you need eight channels of preamplification in 2U of rack space the choice is more restricted, and not all the possibilities have digital output options. The closer alternatives to the ISA828 include the RME Octamic D, Cranesong's Spider, the Presonus Digimax and the Audient ASP008. Alternatively, you could go for two of SSL's four-channel XLogic Alpha preamps. If your budget doesn't stretch this far but you're looking for eight good mic preamps, you could consider the Octopre from Focusrite's Platinum range.

The ISA preamp design isn't new by any means, but to get eight of these highly respected preamps and a digital ouput option in a 2U box, at such an affordable price, makes it very attractive to both hardware and software studio owners.