Over the years I've owned more tape echo units than I can remember, from upmarket HH and Roland units to Watkins Copicats. I even had a couple of the cheap-and-cheerful Melos boxes that used to run off a looped-tape cassette and cost only around 35 quid, but my Roland RE201 remains one of my all-time favourites and I wish now that I'd held on to it. Unfortunately, like everyone else, I was seduced by the promise of quiet, reliable solid-state delay boxes. It wasn't until we'd played with them for a while that we realised all those apparent imperfections relating to tape units (other than the tape breaking mid-solo, of course) were actually sonic advantages. In particular, the way tape compresses and distorts the signal is very important in creating the impression that the echoes are receding rather than just getting quieter, and that very subtle chorus you got from the flat spot on the rubber pinch-roller where you'd left the unit parked since the last gig was a key part of the sound too. The term 'musical' is often over-used, but it really did apply to the RE201, in that the echoes were warm and didn't get in the way of the original sound. 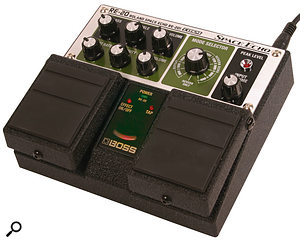 Roland's RE201 Space Echo gained cult status for its distinctive sound. The new Boss RE20 stomp box uses Roland's COSM technology to provide a very faithful model.Various digital delay units have incorporated tape-emulation functions, and more recently there's been the Universal Audio Space Echo plug-in that was designed (with Roland's blessing) to recreate the sound of the RE201 with as high a degree of accuracy as possible. Now Roland themselves have added a digitally-modelled version of the RE201 to their Boss stomp box line. The RE20 comes in the standard Boss twin-pedal format and aims to be a faithful model: it employs Roland's COSM modelling to recreate the sonic characteristics of the original, right down to the cheap and cheerful spring reverb section. In fact, it only 'improves' on the original in two ways: firstly, it allows you to double the maximum delay time from three to six seconds by powering up in a special 'long' mode; and secondly, the pedal can also handle stereo inputs and outputs, even though the echo effect itself is still mono, as per the original.

The panel styling is true to the original hardware, with its black, silver and green livery, and the famous 12-position Mode Selector knob takes centre stage. This determines what combination of the three 'tape' playback heads are being used. Positions 1 to 4 give you echo only; positions 5 to 11 let you add in some spring reverb; and position 12 is reverb only.

Bass and Treble controls are available to shape the sound of the delays, with separate knobs for the reverb volume and echo volume. The delay time can be set using the Echo Rate knob or tap-tempo pedal — and the motor-speed knob of the original is mimicked to the extent that it takes severals seconds to settle down to a new speed. The Intensity knob sets the amount of delay feedback, and a further knob sets the input level. A red clip LED gives warning of overload and, on the subject of level, there's enough headroom and gain range for the unit to work in an amplifier's effects-loop or as a regular stomp-pedal in front of the amp.

A Direct On/Off switch on the rear panel determines whether the dry sound is included at the output or not. You'd normally set Direct to 'On' when working with a guitar amp, but 'Off' when using the unit in the send/return system of a mixer, or in the type of amp effect-loop that mixes the dry signal in for you. Also on the rear panel are the two pairs of jacks for input and output, and there's another jack for an optional external expression pedal, which can be set up to control repeat rate, intensity, echo level or the Twist feature.

"What's Twist?" I hear you ask... This is a hidden, dub-style effect that is triggered by pressing and holding the right-hand pedal, which is normally used to enter a tap tempo. As you hold down the pedal, the delays get louder and the feedback level and 'motor' speed increase, so that the sound rapidly builds up into a swirling cacophony. When you release the pedal, the process is reversed over a period of several seconds, to take you back to your original setting.

The left pedal acts as an effect bypass, and both pedals have red status LEDs. The one on the Tap switch flashes at the tap rate you've tapped or dialled in, while the other indicates whether the effect is on or bypassed. Below the tap-tempo LED is a curved LED display that scans to give the impression of tape movement. After a couple of beers it also looks like a smiley face!

Roland's COSM circuitry models the tape wow and flutter of the original, to the extent that it even changes depending on the 'motor' speed and the selected playback head, giving a convincing analogue shimmer. Tape saturation is also modelled, so when you crank up the feedback to push the unit into self-oscillation you get the same saturated, swirly mess that the original produced, rather than some raspy digital overload. Because these effects are linked to tape speed, you get a slightly different sound if you use 'head' number 1 with a slow 'motor' speed or 'head' number 3 with a fast 'motor' speed to achieve the same delay time. Using these controls you can produce anything from a fast ADT or slapback echo to a delay of several seconds, though the sounds that characterise the unit tend to be those that emulate two or three heads operating at the same time to produce rhythmic repeats.

The RE20 features two pairs of quarter-inch jacks to allow mono or stereo input and output, as well as a further jack for an expression pedal. The Direct On/Off switch determines whether the dry signal is present at the output, enabling you to choose the best setting according to whether or not you're using the pedal with a guitar amp.There's no denying that the RE20 is great fun to use, or that the sound it produces comes very close to that of the original, even when you abuse it by cranking up the feedback. What you don't get is the excessive tape hiss, or the sound of a bad splice bouncing over the heads, but I don't suppose anyone will miss those. The impression of a motor speeding up or slowing down is quite convincing when you change the Rate setting, and even the appallingly twangy reverb of the original is modelled (possiby more faithfully than it deserves to be: if you mix in a hint of reverb with the echo, the sound works really well, but if the reverb is loud enough to be a feature in its own right, it sounds just as you'd expect three short springs to sound!).

As the motor speed and saturation have been modelled so well, the RE20 should appeal to anyone wanting to make dub-style music, but it also works to give you that '60s surf-guitar sound, or Pink Floyd stadium-style guitar solos. Rolling a bit of top off the delay helps keep it out of the way of the original (dry) sound, for the times when you want to use a higher delay level, and overall the unit is very hard to fault. I did, however, discover that if you accidently use a balanced jack cable to carry the output, when you hit bypass the dry signal disappears, as well as the echo! If you use a regular guitar cable it works fine, but this is worth remembering, as it could easily catch you out in the studio. When you hit bypass, any echoes still 'in progress' finish naturally, which is a nice touch.

There's not much to complain about in the RE20. Even the battery life (the down side of many modelling effects) is sensibly long: running time is around 36 hours on six AA alkaline batteries, but it also accepts an optional Boss PSA power adaptor. It doesn't have quite as much tweakability as the UA software version, which also allows user control over details such as how worn the tape is, and whether you want the splice to be audible or not, but the RE20 manages to capture the essence of the RE201 very convincingly, and it comes in an incredibly easy-to-use format. Being able to do all those motor speed and feedback dub tricks will be welcomed by the more experimental users. Of course, the reverb may be on the dire side, but that is the fault of the original (the model is faithful). If you're a fan of tape echo, the RE20, at a shade over £150, is great value. I think it's probably fair to say that you're going to find it very hard to resist — I know I am! Paul White

This is probably the closest a hardware pedal has come to emulating the traditional warm tape-echo sound. It is both compact and easy to use, and it achieves a sound that's very near to that of the vintage Roland RE201, with incredible attention to detail — even down to the modelled spring reverb sounding just as bad as the original! 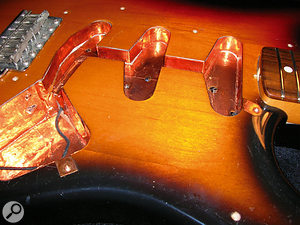 Screening your guitar's electronics with self-adhesive copper foil is a cheap and effective way of reducing unwanted buzz and hum.You may remember that we looked at the issue of guitar screening several issues ago. Screening can be particularly beneficial for guitars fitted with single-coil pickups, and one of the simplest ways to screen your guitar is to line all the body cavities with self-adhesive copper foil, soldering the strips together where they overlap. You then connect your screen to the ground wire of the output jack. But where do you find copper foil without having to resort to mail order? I discovered the answer to this in a most unlikely place: my local garden centre. Apparently, slugs don't like crawling across copper, so you'll often find self-adhesive copper-foil slug-band available at around £5 for four metres. Apparently, you're supposed to stick it around vulnerable plant pots. The strip I saw was about 30mm wide, which is fine for screening, and the price was more attractive than at many places selling the foil specifically as a guitar screening aid. Not only will screening your guitar reduce buzz and hum, but now it seems it will also keep its insides free from slugs! Paul White