SE's extended library offers a large number of very useful extras: scaled-down 'chamber' strings, supplementary solo woodwinds and brass, woodwind ensembles, the cinematic 'Epic Horns' and three solo saxophones. A harpsichord, classical guitar, a hairy, overdriven rock guitar and even the Vienna Konzerthaus Organ are thrown in for good measure, along with sustains and staccatos from VSL's ever-popular, lush Appassionata Strings. Everything but the kitchen sink, and I wouldn't bet against VSL sampling that at some point. (See http://vsl.co.at/shop/articulati...? for a full listing.) 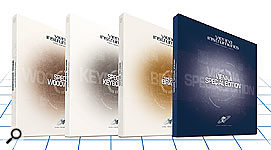 The patches are cut-down versions of their Vienna Instruments equivalents, with fewer velocity layers and samples, spanning a tone rather than a semitone. Despite this, I found little sonic difference between SE's 14 violins and the full VI version; the non-chromatic sampling had no detrimental effect, and having three dynamic layers rather than four was something I could live with. The same isn't true of the Bosendorfer — three velocity levels simply can't do justice to an acoustic piano.

Though blessed with a comprehensive instrumentation, SE offers relatively few perfomance styles — potentially a problem if you want to recreate a full orchestral score. But alongside the no-frills deliveries (typically, sustain, staccato and sforzato, plus detaché, tremolo and pizzicato for the strings) you'll find the wonderful performance legatos and 'Bollywood' portamento slides that other sample libraries can't touch.

Now that the Pro Edition and Horizon Series titles are discontinued, Special Edition is the only single VSL collection capable of creating full orchestrations. That alone should make it a serious proposition, but when you factor in the superb musicianship, beautiful close-up sound and legato samples, SE begins to look like a must-have product.

For those already hooked on the Vienna sound, the latest trio of Vienna Instruments offer some mouth-watering (if somewhat specialised) additions. Special Woodwinds (31GB) has five new, rare instruments. The bass flute sounds beautifully warm and breathy, especially in its sumptuous low register. Played in combination with strings, it creates a psychoacoustic effect akin to being wrapped in cotton wool and dipped in warm caramel. If that thought makes you feel amorous, you might fancy a quick tootle on the lovely oboe d'amore (a warm, exotic-sounding reed instrument reminiscent of a cor anglais but with a slightly brighter tone). Sounding like a bass oboe, with which it is often confused, the heckelphone is stunningly expressive and lyrical, and one of the nicest-sounding woodwinds in VSL's collection.

Musicologists will be pleased (English football fans less so) to see the Basset horn included. To the untutored ear (of which I have two) it sounds like a clarinet, but this instrument has a more penetrating tone, and sounds more assertive than the rather retiring B-flat clarinet in Woodwinds I. If you're looking for depth, check out the the mighty contrabass clarinet: its practically subsonic low register sounds almost electronic, while its upper range is clear and rotund: a sonorous, melancholy timbre.

Perhaps as a nod to brass-band enthusiasts, the 22.5GB Vienna Instrument Special Brass includes a cornet and euphonium, both played with pinpoint accuracy. The cornet provides a subtle alternative to solo trumpet and is fast becoming a favourite with VSL fans. The euphonium (a type of tuba) and alto trombone extend their respective instrument family's high register by a fourth; the latter plays some great slides which track intervals of up to six semitones. While these instruments have their uses, most people will be interested in Special Brass' 'Fanfare Trumpets'. Designed to complement the eight-player Epic Horns, the new section features six unison trumpets with a fat, slightly chorused sound. Their crescendos and sffz performances are a knockout and will add great brilliance, power and sonic majesty to orchestral arrangements.

Playing a real harmonium involves non-stop pedal-pushing, but VSL have banished the leg strain on their 8GB Special Keyboards by sampling eight harmonium stops, ranging from a plain, hymnal bourdon to the multi-octave wheeze of 'Grandjeu'. We can now enjoy long sessions on this folksy Victorian reed organ without coming away feeling that we've been man-marking Christiano Ronaldo. SK also features a harpsichord (here given its Italian/German name 'cembalo'). Only three stops are provided; one of them couples a high octave to the fundamental pitch, making that bright, crashing metallic racket I associate with iconic 1960s TV themes.

Say 'prepared piano' and you can bet your life someone will say 'John Cage', that being the name of the zany American chap who first inserted erasers, nails, wire, paper and so on between the piano strings (perhaps as a protest against childhood piano lessons?) VSL haven't exactly followed Cage's 'preparation' instructions, but they do have an extensive fiddle about inside the unfortunate joanna, totally messing up its sound by inserting chains, screws, foil and glass in the strings. In addition to the resulting set of jangly industrial percussive noises, there are delicate harmonics, zither-like stick hits and some nice, spooky glissandi. All good fodder for the creative composer's sound palette, and recommended if you've a couple of hundred quid to spare. Dave Stewart

Three more expansion packs have been released for ToonTracks' EZ Drummer. First up is Nashville, which isn't, as the name suggests, about lightweight country and western. The wonderfully-solid PB drum kit was sampled at a generous number of velocities. You can choose from several Ludwig and Tama snares (including a brushes option) and a lovely selection of cymbals by Sabian and Zildjian, which seem to ring forever. The room and overhead mics are joined by a compressed room-mic slider. This kit sounds great pumping out rock or power pop, and is a must-have for any EZ Drummer owner who wants a wider choice of traditional acoustic drum kit sounds. 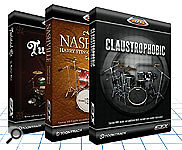 Claustrophobic offers some very dry kit sounds, augmented by heavy cymbals and some useful percussion, all set out on the DrumKat controller. One of the floor toms combines drum and cymbal sounds. The cabasa and cowbell are refreshingly normal, while the kick drum comes with plenty of damp-sounding alternatives, and when you open up the room mics and overheads in the mixer page, even the room sounds small and dead. Choice of cymbals ranges from tiny splashes to Chinese, and most have several alternatives (including Sabian and Zildjian), via a pull-down menu that appears when you click the arrow key on the kit piece. Again, most are dark-sounding to complement the 'claustrophobic' theme. This isn't a kit of conventional drum sounds, but it offers a balanced selection of the industrial/urban and the traditional.

As well as the usual room, overhead and close mics, Twisted Kit offers variable compression, and four effect sliders that control reverb, treble boost, distortion and attack. The toms, reminiscent of a Marrakech street-market, are complemented by kick drums going from a Gretsch to a weird, buzzy Chinese drum. Hybrid sounds include kicks layered with metal pots, and snare drums that range from a normal snare layered with a hit metal pot to more trashy sounds (recalling the sound of a metal pail being dropped, for example). The hi-hats include metal spokes, Tibetan cymbals and cheap-sounding 'Low Boys', and the cymbals all sound oriental. Add to this a djembe, a tableful of 'hippy shop' percussion, metal kitchen utensils, struck cases and boxes, and a few human noises, and there you have it. This odd selection has an urban-meets-orient feel and is surprisingly useable. Paul White

True Strike, an impressive, walloping collection of orchestral percussion, made a big splash, and the sequel True Strike 2 (TS2), has now arrived. Like its predecessor, this 13.8GB library is aimed at film, trailer, TV and game composers, but TS2's percussion is mainly of the ethnic/world variety.

A lot of sonic territory is covered: the 'Big Bang' and 'Dystopian Hits' folders contain all-purpose, deep percussive impacts, bashes, thuds and thwacks that Hans Zimmer would be proud of. 'Dystopian Effects' features other-worldy soundscapes, and in 'Dystopian Scrapes' the programming is over the top in a good way, with mad, heavily-processed alien-radio soundbursts.

Back on earth, TS2 does some serious globetrotting, providing bendir and darabuka hand-drums from Turkey (the bass darabuka has a great, deep, clean, resonant sound), African udu, djembe and gankogwe bells, a cajon box-drum and Japanese drums, bells and cymbals. Japanese monk cries add some extra colour: it sounds like the chap is uttering an urgent call to prayer, but there again he might be asking someone to call him a mini-cab. There is a large variety of authentically-played hits but no grooves; the hand-drum phrases centre on rolls, accelerating repeated hits and flams.

Complementing these earthy drums and bells is a pretty set of tuned bowls, ideal for chill-out meditation and getting in touch with your inner hippy (unfortunately, mine moved out in 1978 and is now a successful trust-fund manager). A bowed vibraphone is another great ethereal timbre but, if you want less soothing sounds, the screechy bowed cymbals and crotales are guaranteed to set your teeth on edge.

The cimbalon is a surprise inclusion; it's good to find the refined, plaintive twang of this Eastern European hammered dulcimer nicely recorded in a concert hall. So-called 'prepared piano' samples (piano-interior effects, such as glissandi, slithery string rubs, percussive cluster hits, reverberant bass knocks and scary rumblings) are another unexpected bonus. In a more melodic vein, I liked the beautiful multisamples of piano strings plucked with a plectrum and hit with a drumstick.

Two criticisms: the library shipped with the wrong installation software and it provides no information about its instruments, but I found many of its sounds truly inspirational, so True Strike 2 gets five stars, even if its title does sound like a Bruce Willis movie. Dave Stewart