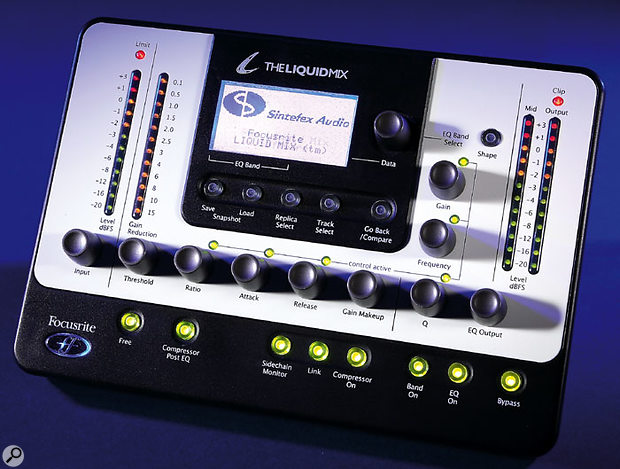 Focusrite's Liquid Mix could be the hottest product of the year, using convolution technology to integrate a stellar range of vintage analogue EQ and compressor replicas into your DAW. We got our hands on a prototype to see whether it lives up to the hype...

Focusrite started something of a stir in the professional audio market when they released their Liquid Channel, a high-end voice channel that had the ability to emulate a number of different preamplifiers, equalisers and compressors using a new core technology called Dynamic Convolution, which they licensed from the inventors Sintefex. Straightforward convolution can't reproduce the characteristics of non-linear audio processes such as compression or distortion, which is why Dynamic Convolution was invented. In essence, it analyses the behaviour of the subject piece of audio gear when fed a series of pulses and test signals at multiple gain settings and frequencies. DSP technology is then used to replicate the response of the original device in real time, with full user adjustment of the control parameters. Sintefex are a Portugal-based software development company, though the three directors are British and their hardware R&D takes place in Cambridge not a million miles from the secret hollowed-out volcano lair of Sound On Sound headquarters.

While the Liquid Channel was aimed squarely at the professional user, technology has a habit of spinning off in more affordable directions, which is why I now have a prototype of Focusrite's new Liquid Mix sitting in my studio. The Liquid Mix combines Dynamic Convolution technology with concepts that are already familiar to many computer musicians. For example, we are all aware of DSP-assisted processors from companies such as Creamware, Digidesign, Universal Audio, Waves and TC Electronic, and we all know about hardware control surfaces that interface with software. The Liquid Mix, in essence, combines DSP horsepower with a hardware user interface that fits into a neat desktop unit and connects to the computer via Firewire. Cosmetically, the moulded unit is very stylish and is reminiscent of a high-end reverb remote controller. All you need to connect up to a six-pin Firewire port is the included Firewire cable, and a PSU (12V AC at 1 Amp) can be connected for those using non-powered four-pin Firewire connectors.

The DSPs run a range of EQ and dynamics processing plug-ins that use Dynamic Convolution to replicate various pieces of classic studio EQ and compressor hardware, so in essence you're getting all the Liquid Channel technology other than the analogue preamp section (which is very expensive to build), available as plug-ins and for a fraction of the price of the Liquid Channel. Furthermore, as all the really hard work is done by the on-board DSP, there's very little hit on your host CPU. The reason this isn't a full-blown review is that Focusrite still need to finish tweaking the code to add the full quota of 'replicas', but shipping of the Mac version is expected by June this year with the PC/Windows version following on a little later.

By the time it ships, the plug-ins that come with the Liquid Mix will be able to run in VST, Audio Units, and RTAS-wrapped VST formats, and so should be compatible with all the mainstream sequencing software. Despite its low cost, the Liquid Mix aims to provide 32 simultaneous channels of EQ and compression, where the user can choose from a large library (20 EQs and 40 compressors) of EQ and compressor types. Additional emulations will be made available on-line and there's even provision to build your own hybrid dream EQ with up to seven bands taken from different equalisers. Each of the 32 channels may be accessed as a separate plug-in within the sequencer in the usual way, and because of the nature of the processors, this will normally be via channel or buss insert points. While the unit can run up to 32 mono or 16 stereo channels at 'normal' sample rates, an optional DSP expander is planned to increase the maximum channel count at higher sample rates. This will fit into the unit via a panel at the bottom of the case.

You can, of course, control the Liquid Mix's processors directly using your computer's GUI if you prefer mousing around, but one of the key aspects of the unit is that it combines all this sophisticated plug-in power with a very practical control surface, which has dedicated continuous controller knobs for the main compressor controls (Threshold, Ratio, Attack, Release and Gain Makeup), and Gain, Frequency and Q controls for a single EQ band. A further data wheel moves between EQ bands and there's also a master EQ output level control, as well as a general input level control for the whole channel. Further functions such as saving and loading patches, selection of model type and even track selection are accessed by small illuminated push switches. There's also a Compare/Go Back function, plus a button that selects the EQ shape for the currently selected band. There's also good metering covering the input level, the amount of gain reduction and the output level, with a further meter covering the level between the compressor and equaliser, which can be switched pre- or post-compressor. LEDs show when limiting takes place and warn of output clipping. 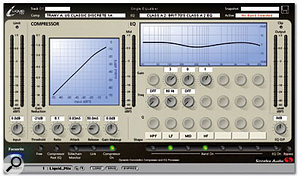 If you prefer to control plug-in parameters from the screen, everything is available there too!Photo: Mike CameronAlong the lower edge of the front panel are buttons for switching the positions of the compressor and EQ and for accessing the side-chain monitoring. Stereo linking also has its own button, and there are four further buttons for switching in and out the compressor, the entire channel EQ, a single EQ band or the whole lot. The way the replica plug-ins work is that by default, they have the same control options as the original, so if the original has a stepped ratio control rather than a continuous one, that's what the Liquid Mix gives you. However, if you need more flexibility you can use the Free button to allow you to dial in interim values. A backlit LCD window displays additional information pertaining to patches and parameters, and when the EQ is being viewed, a small version of the EQ curve is displayed.

On the beta model I've been using, the data wheel is used to select the EQ band being worked on, and also to switch between viewing the EQ and viewing the compressor. However, Focusrite have already been asked for some kind of automatic switching system that moves between displaying the EQ and compressor when knobs in the relevant section are moved, and apparently this is on their to-do list.

As I mentioned at the outset, the current version is Mac-only and currently requires Mac OS X Panther (10.3.3 or later), with support for the new Intel Macs included. Obviously, the computer needs a Firewire port, and a minimum spec of an 800MHz G4 with at least 256MB of memory is suggested. Devices that access processing DSPs over Firewire inevitably increase the system latency to some degree because of the need to move data into and out of the computer, but the engineers at Focusrite say the Liquid Mix should not add more than 2 or 3 ms to the latency of a typical system. What's more, as these processors are designed for use when mixing, you can always leave them off until you've finished tracking as latency doesn't matter at all when you're mixing.

My first attempt to use the Liquid Mix was thwarted by its reluctance to play nicely with the Belkin Firewire hub I had in my system (even when not plugged into it), but once this was removed, the software installed and the Liquid Mix Manager program started, I had the system up and running in moments. In this beta version only the VST versions of the plug-ins are supported so I checked the operation from within BIAS Peak, with which the Liquid Mix worked seamlessly. It seems that most or all of the compressors are already implemented, but at the time of writing there's only a handful of EQs, though there will of course be a full set by the time Liquid Mix ships. As with most products that seek to emulate others, there are cryptic clues as to what pieces of equipment have been replicated but no overt naming other than for other Focusrite devices. Already there are Focusrite Green and Red equalisers, not to mention a British Green optical compressor and a wide range of other US and UK models, both tube and solid-state.

That these are available as plug-ins at all is impressive enough, but having knobs to adjust them and real hardware meters to show you what is going on is pure luxury. As mentioned earlier, the controls are presented as on the original with the same size steps where switches were used, but the Free button allows you to override this limitation if you wish to. Where the original compressors had side-chains, and where the host software supports audio routing to side-chains, you can use the compressor for ducking or de-essing as you might with a hardware device, while the side-chain monitor button lets you hear exactly what the side-chain is hearing.

This is only a preview, but already the Liquid Mix is an impressive piece of kit that looks perfectly at home on the desktop. The ability to use so many high-ranking equalisers and compressors at the same time and without imposing an excessive load on your CPU is very liberating. Inevitably, some of the equalisers and compressors will sound more obviously different than others, but Focusrite and Sintefex have gone to great lengths to get these replicas sounding as close to the originals as possible. If you've always hankered after a rack full of classic outboard gear but never had the money or space, the Liquid Mix seems like the perfect solution. We'll bring you the full review when the release version is available.

A full in-depth review of Liquid Mix can be found in SOS September 2006 issue.