Focusrite's Saffire already offered an awful lot of Firewire interface for your money, but the new LE version could just be even more of a bargain.

Focusrite's Saffire audio interface (reviewed by Paul White in SOS September 2005: www.soundonsound.com/sos/sep05/articles/saffire.htm) has proved very popular since its release, and it's not hard to see why — as well as audio and MIDI I/O, the Saffire featured Focusrite mic preamps and a selection of DSP effects, which were also included in native versions to run as software plug-ins in your favourite sequencer. The Saffire is still a tempting buy at £349, but Focusrite have obviously spotted a gap slightly lower down in the market, which is where this £239 LE version comes in. 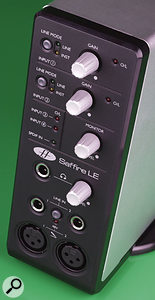 The biggest difference is that the Saffire LE has no onboard DSP to run effects, although you do still get the native plug-in versions. Elsewhere, the number of balanced/unbalanced analogue outputs drops from eight to six, although this still allows you to output in 5.1 surround, and there's only one front-panel headphone output rather than two. The LE only supports sample rates up to 96kHz, but this is hardly a big problem: the original's 192kHz capabilities will be of little practical use in most home studios anyway.

A few metering and monitoring functions are simplified on the LE; inputs one and two now only have a single Overload LED instead of three-LED level meters, while the monitor output loses its Dim and Mute buttons and there's no MIDI Out/Thru button (although all three of these functions are still available in the Control Panel software). The LE software bundle is also different from that of the original Saffire, with Cubase LE replaced by a special Lite edition of Ableton Live 5, compact versions of FXpansion's BFD and Guru, and 470MB of samples from Loopmasters.

However, it has the same digital audio and MIDI I/O as its bigger brother, and better still, the original two mic/instrument/line inputs featuring those desirable Focusrite mic preamps are now supplemented by two additional balanced/unbalanced line/instrument inputs on the rear panel, each with a dedicated front-panel Overload LED. The Saffire LE can be buss-powered from one of its two Firewire 400 ports, although a 12 Volt DC wall-wart PSU is included for anyone connecting it to a four-pin Firewire port on a PC laptop. All of the analogue I/O bar the XLR mic inputs is on quarter-inch TRS-wired jacks and can be used as balanced or unbalanced.

The front-panel analogue output level control for outputs 1/2 is a welcome feature that I've been asking for from manufacturers for some time, as it greatly helps those who plug their audio interface directly into a pair of active monitors, so they can easily set control-room levels without compromising audio quality by turning down digital faders. Well done to Focusrite for that, although it would be even better if all front-panel rotary controls had calibration marks to enable repeatable settings to be achieved, both for control-room monitoring levels and to help match input gains when recording in stereo.

Drivers for the Saffire LE are provided for Windows XP and Mac OS X, and I had no problems installing them on my PC. However, one thing I didn't pick up from Paul White's original Saffire review is that the hardware incorporates a Pace Interlok dongle to protect the native plug-ins. In order to use them you need to send a generated challenge file to Focusrite's web site, along with the Saffire serial number and plug-in registration code, to receive a response file. You can do this up to four times, so you can use the Saffire LE and plug-ins on different computers.

Although the Saffire LE loses a pair of analogue outputs compared with its big brother, it actually offers an extra pair of line inputs.Photo: Mark EwingThe Saffire Control LE panel is rather different from that of the original Saffire, largely because there are no longer any DSP effects to be adjusted. Like all such utilities, it took a few minutes to get my head round it at first, but I found it flexible and easy to use after that. Controls for the four analogue and two digital inputs are at the top left, with individual level meters. 'Hi Gain' switches are available for line inputs 3/4 to make them more suitable for instrument duties, and there are six monitor faders and pan controls with stereo link buttons controlling the input signal mix to analogue outputs 1/2. Below this section are six more almost identical sets of monitor faders, pan and stereo link controls; these set up the mix of input signals that gets routed to the headphone output and analogue outputs 3/4. On the right-hand side are four stereo level meters displaying software playback channel levels, plus two rows of four stereo faders controlling the amount of each of these signals that gets routed to the main and headphone outputs.

A central vertical strip of controls offers master level controls for the three analogue output pairs, which — usefully — can be linked for surround work, plus associated Mute buttons. There are pre-fader meters for the main and headphone outputs along with sliders that balance input against playback levels for main and headphone outputs, plus a handy Dim button to drop main output levels by 18dB (not 12dB as stated in the manual), and a further button that optionally sends the main output signals to the S/PDIF outputs.

The Saffire Control LE utility can also operate in two preset modes. The default Track mode is ideal during recording, setting up both monitor and headphone mixes from all the inputs as well as playback channels, while S/Card mode mutes all input signals from the monitor and headphone mixes, and sets playback controls so that only Playback 1/2 emerges from the main out and Playback 3/4 from outputs 3/4 and the headphones.

If you want a compact Firewire-based interface between £200 and £300 with a versatile selection of input options including mic and guitar, enough outputs to cope with surround, and with good audio quality, there are quite a few on offer. The Presonus Firepod has a very similar spec to that of the Saffire LE, though its headphone output benefits from being a separate feed and not tied to the main 1/2 output, and it can now be bought for about £250, making it the Saffire LE's closest competitor. Edirol's FA66 has a similar input complement, but only four analogue outs, and has optical S/PDIF instead of coaxial (which may be more compatible with your other digital gear). However, it does have an attractive analogue limiter to keep recording levels in check, and is only £200. If you want more analogue I/O and don't mind losing the limiter, Edirol's FA101 provides a total of eight analogue inputs and outputs, plus optical S/PDIF and MIDI I/O for around £290.

M-Audio's Firewire 410 only has two versatile inputs, but eight analogue outputs plus two headphone outputs with individual level controls, the extra versatility of both optical and coaxial S/PDIF, plus MIDI, and can now be found on the street for £240 — the same price as the Saffire LE. However, unlike the others mentioned here, its analogue I/O is all unbalanced.

It's good to see Focusrite bucking the trend by quoting the Saffire LE's internal clock jitter level, and at less than 250 picoseconds, their figure is considerably better than that published for any other interface below £500 that I've reviewed to date. A low-jitter clock is vital for excellent stereo imaging, so I was very keen to see whether this figure translated into an obviously audible improvement.

After matching the output levels of my own Echo Mia and Emu 1820M, and the review Saffire LE, to within 0.1dB, I started to listen to them in turn, but it only took one audio snippet to dispense with the Echo Mia — it was so easily spotted as being slightly harsh and distinctly less focused. Switching to the Saffire LE was like lifting a veil from the sound, letting me hear the instruments beneath. It took me slightly longer to make up my mind between the Emu and Focusrite interfaces as the differences were smaller, but while the Emu 1820M, as always, turned in a refined performance, the Saffire LE took the lead with even tighter and more focused imaging, making the Emu sound a little 'woolly' by comparison. Emu's range has done incredibly well to retain my personal vote for 'best audio quality for audio interfaces under £500' for the last two years, but I think it's finally met its match in the Focusrite Saffire series: the Saffire LE provides truly excellent subjective audio performance for a £239 interface. I was also impressed with its mic preamps, while the 1MOhm impedance of the instrument inputs was high enough to avoid any premature roll-off of high frequencies. 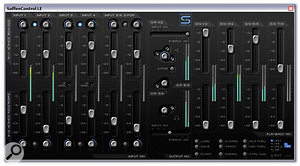 With comprehensive monitor mixing and metering of input and output levels, the Saffire LE's new Control utility is effective across a variety of recording and playback scenarios.Photo: Mark EwingTo double-check what my ears were telling me I ran my usual raft of Rightmark Audio Analyser tests. Frequency response was -0.3dB down at 18Hz and 20.5kHz with a 44.1kHz sample rate, and at a much wider 20Hz to 42kHz at 96kHz sample rate, with a tiny 0.3dB peak at about 32kHz. Measured dynamic range confirmed the manufacturer's figure of 105dBA, and although you can buy 'quieter' interfaces, I personally feel that the Saffire LE's lower-jitter clock is more important to overall audio quality.

Driver performance was also good, with Cubase SX managing the lowest 4ms latency at 44.1kHz on my PC without any glitching, as it did in Sonar 5.2 Producer Edition (with the WDM/KS drivers it managed the lowest 10ms Effective latency with ease). NI's Pro 53 managed a slightly better than average 30ms Play Ahead setting with the Direct Sound drivers, and 45ms with the MME ones. My only disappointment was that the Saffire LE doesn't have GSIF drivers for Gigastudio.

Paul White covered the Saffire plug-in effect suite (reverb, compressor, EQ and amp simulator) in great detail in his original review, and since the LE versions are identical I won't elaborate here, except to say that I found that the three rather basic Saffire Reverb controls produced a surprisingly versatile set of sounds after a little experimentation, and the Template/Advanced modes of the Saffire Comp and Saffire EQ are an inspired way of providing you with initial settings to suit a particular application, while still letting you get at the individual controls for further tweaking.

The Jewel In The Crown?

It's always a gamble introducing a new cheaper model to an existing range, since the manufacturer risks losing sales of the more expensive version. So have Focusrite thrown out the baby with the bathwater by dispensing with the hardware DSP effects of the original Saffire, or have they got their sums right? I think they have judged the Saffire LE very well indeed — built-in DSP effects can be handy, but many musicians will be perfectly happy to save money and rely on plug-in or outboard effects.

The Saffire LE provides two excellent mic preamps, instrument inputs that work well for DI'ing guitars, two extra line inputs compared with the more expensive Saffire, enough outputs to suit stereo or surround work, and excellent audio quality throughout. The Firewire interface market has never been so crowded, but with the Saffire LE Focusrite have carved themselves yet another niche — at £239 this is an absolute bargain!

If you want the hardware DSP effects you'll have to buy the original Saffire, but if you lusted after its cute desktop design, good-sounding mic preamps and excellent audio quality then the Saffire LE might be the perfect small Firewire interface for you, especially as it's £110 cheaper!