If you want hands-on control over your DAW, without the expense or inconvenient size of a multi-channel controller, the Frontier Design Alphatrack could be just what you're looking for... 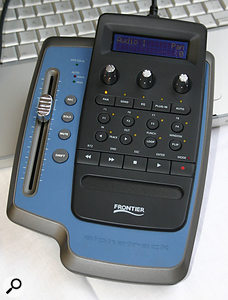 Having used a desk full of Logic Control surfaces and expanders for the past three or four years, I have come to realise that some things are still done faster by mouse, and most of the time I use only the transport controls and the faders. When it comes to accessing and adjusting plug-ins or tweaking EQ, I still gravitate towards the mouse. If you have the same kind of relationship with control surfaces, you may well be interested in Frontier Design Group's Alphatrack, which measures a compact 8.5 x 6 x 3 inches (or 22 x 15 x 7.5cm) yet provides all the key DAW control functions in a very friendly and stylish format. Most common DAW software is supported, including Pro Tools, with new applications being added whenever possible.

The Alphatrack connects to your PC or Mac, and also draws its power, via USB, making it ideal for mobile use with laptops, as well as for desktop systems.

The unit is equipped with a single motorised, long-throw, 100mm fader, three rotary encoder knobs with integral push-switches, 22 buttons (with 21 status LEDs) and a horizontal, ribbon-controller-style pad for shuttling the timeline cursor through the song. You can also use two fingers on the strip at the same time, to control the shuttle speed. A 32-character backlit display shows current parameter names and values, and there are direct mode buttons for controlling pan, sends, EQ, plug-ins and automation. The three rotary-encoder knobs are touch sensitive, so the display changes in a context-sensitive way when you adjust one. The knob functions are linked to whichever control mode has been selected using the buttons below. For example, in EQ mode, you can scroll through EQ bands and adjust all the necessary parameters.

At the time of writing, the following DAWs are supported for Alphatrack. Check the Frontier Design web site (www.frontierdesign.com) for updates.

A shift button extends the feature set, allowing eight function keys to be accessed and providing alternative functions for the transport controls in some DAWs. Dedicated record, solo and mute buttons reside alongside the fader, which always relates to the currently selected DAW track, bus or output. Note that in some DAWs, such as Logic, the mute and solo buttons control the DAW's mixer-page channels and not the Arrange page mutes and solos, the reason being that Logic can have multiple tracks on the Arrange page relating to the same mixer channel, so you need to be able to solo them individually. A jack socket on the rear panel accepts an optional standard momentary-action footswitch jack for hands-free punch-in recording.

With support finally available for Logic 8, the Alphatrack now works with all the main DAW packages, either via its native mode or its dedicated Logic, Pro Tools, Live, Final Cut or Soundtrack Pro profiles. See the 'Curently Supported DAWs' box for a full list of packages, but note that some need to be the latest versions to work properly.

Though Logic 8 has an Alphatrack control surface mode in its menu, this still wasn't working properly at the time of writing (in Logic 8.01), so Logic users will need to download the latest driver and the public beta Logic plug-in from the Frontier Design Group web site (www.frontierdesign.com) to get around this. According to Frontier, Apple shipped Logic 8 with a plug-in that recognised Alphatrack's presence, but that said the plug-in was incomplete. Frontier were then given authorisation by Apple to complete the work that they had begun, hence the public beta version of that plug-in posted for preview. They will post a final version once it has been sufficiently tested and tweaked. However, the only bugs I could find with the public beta version were minor and didn't get in the way of doing the job.

I also discovered an issue that can apparently occur with some laptops and peripherals that are in a system with no ground connection. Initially I found that the display flickered between three control messages whenever I touched one of the three knobs, but unplugging my external hard drive and running the laptop from battery power cured it instantly. It seems that a lot of electrical noise is generated from ungrounded PSU-driven systems, and this can confuse the touch sensors on the knobs. Connecting a piece of grounded equipment to the system also cured the flickering, so it's not a huge issue as long as you're aware of the solution. Sometimes just connecting an Ethernet cable that goes to a network or another computer will cure it as well. 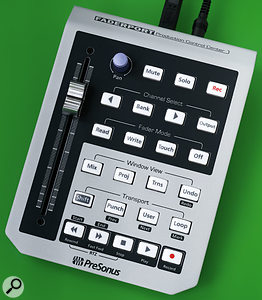 Ergonomically, the Alphatrack is very impressive, with all the controls set out for easy access. My only minor gripe is that I found it hard to grip the conical knobs below the display, but then I can never open the plastic bags at supermarkets either! Apparently, Frontier Design have made a more cylindrical knob and deeper fader-cap set in response to customer feedback. These are available at a minimal cost from their on-line store for anyone wishing to replace the conical knobs. Current production units have the newer style installed as standard.

The transport buttons are big enough to be easy to use without taking up too much space, while the fader, with its record, solo and mute buttons, is ideally positioned on the left-hand side. I actually found accessing the sends faster and more logical than with my Logic Control, and although I personally still prefer a physical wheel for shuttling around the song, the ribbon employed here works perfectly adequately. Setting up loop and punch-in points is also very easy, so the only control-surface function I use a lot that isn't available here is the ability to scroll the display zoom value.

The actual operation of the Alphatrack differs according to what DAW you use it with, but I found it very intuitive and friendly with Logic. The display generally tells you all you need to know, and if you're not sure what something does, you can give it a try and see what happens. Often that's quicker than looking for the answer in the on-line support documents. For example, the pan knob's push-switch (in Logic) changes from coarse increments of eight steps to single-step resolution.

I really enjoyed working with the Alphatrack and I'm certainly going to be using one alongside my laptop in the future.

The really obvious alternative to the Alphatrack is the Presonus Faderport, which has a very similar design concept — a single motorised fader accompanied by numerous buttons and a rotary encoder for pan adjustment. At £159, it's also very similar in price to the Alphatrack. You can read my review of the Faderport in the June 2007 issue of Sound On Sound.

A lovely little controller at a sensible price.