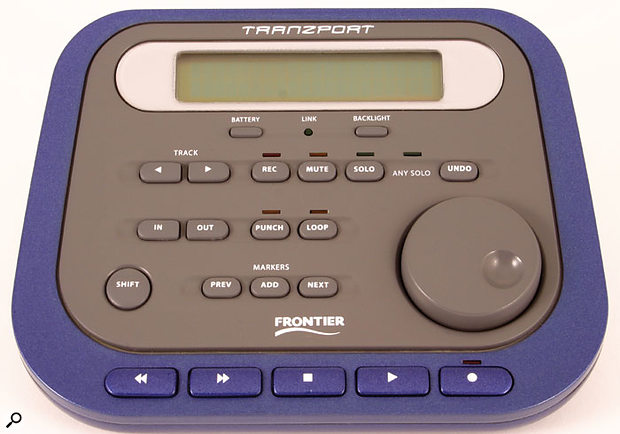 Frontier Design's Tranzport might not be the most comprehensive control surface around, but it has one huge advantage — wireless operation means it's not tied to your computer.

Ever since I first saw the prototype Tranzport, I knew that I needed one. When I visit music trade shows, I tend to evaluate products by how likely they are to have my credit card levitating out of my pocket, and in this case I had to climb up and drag it back from the ceiling! Given that I already have enough Logic Controls and Expanders to cross three time zones, you might reasonably ask why I should be interested in a control surface that offers only 16 function buttons (two of which are taken up checking the battery and turning on the LCD backlight!), basic transport controls and a data wheel lurking beneath a miserly two-line display. Those of you who have already read up on the Tranzport will know the answer, of course — it operates wirelessly over a sensibly adequate range so you can take it into the live room with you and operate your DAW remotely, which is invaluable on those sessions where you are both engineer and performer. It also has a footswitch jack on the side for situations where you can't spare any of your upper limbs for punching in.

A tiny radio receiver connects to a USB port on your Mac or PC, while the Tranzport itself operates from four AA batteries and puts itself to sleep after 15 minutes of not being used so as to ensure a long battery life. Touching any button wakes it again. Apparently the radio system uses advanced coding and frequency-hopping techniques to operate without falling prey to interference, even where other wireless devices are being used. The system is compatible with computers running Windows 2000/XP or Mac OS X (10.2.8 and above), and requires one USB port for the receiver.

The Tranzport is pretty easy to set up, requiring only the installation of some driver software, and better yet, it requires no configuration to work with Pro Tools (via the HUI protocol), Sonar, Logic, Cubase and Digital Performer as well as a few other supported, less well known applications. It has three basic control modes, selected from a software control panel: Native, HUI and Cubase (Mackie Control). To use it with Logic on a Mac G5, I just had to run the installer, then drop a file in the Library/Applications Support/MIDI Device and Plug-Ins folder. It is important to install the software before connecting the receiver, otherwise you'll probably have to start again. Once you finish the installation and restart, the Tranzport shows up in the Remote Control Setup Preference page alongside any other controller you may have installed. For Logic you simply select Native Mode, and there's absolutely no conflict in running the Tranzport alongside a Logic Control.

Using the Tranzport, you can select and arm tracks, use transport controls, set or locate to markers, move the timeline cursor using the wheel and so on. Scrubbing is also possible but you can't switch between Scrub and Jog modes using the Tranzport — you need to do that on your DAW. You can also adjust level and pan position, handle punching in and out, and engage your DAW's loop function. In and out points can be set from the Tranzport, and although the display is small, it provides bi-directional feedback (it updates to reflected changes using the mouse or other control hardware) of just about anything you might need to know while overdubbing, including the track name, cursor position, level fader setting and pan setting. The bottom line of the display also functions as a level meter. A backlight can be switched on or off when necessary, and key functions have status LEDs to show when they are active.

You can see pretty much all you need to know about the controls from the photograph, but it is worth mentioning that the Shift key needs to be used for some operations, and when setting punch or loop in and out points, you have to use both the Punch/Loop and In/Out buttons in combination. The changes are reflected in the display, so you don't have to worry that you might not have got it right. One thing that fooled me at first when working in Logic is that when you select a new track using the Tranzport, its name shows up on the Tranzport display but the highlighted track on the Logic Arrange page doesn't move to match. The same is true with Logic Control of course, but it seems more natural with a controller that has multiple channel strips. You can use the Track button to step through the tracks one at a time, or use the Shift and Track buttons to jump through in banks of eight, and if you're one of the many people who find markers invaluable, you can add markers at the cursor position and then locate backwards or forwards through the markers, all from the Tranzport. Other key functions for which there are dedicated buttons are Record Ready, Track Mute, Solo and Undo (which can be used with Shift for Redo).

Practical uses for the Tranzport include doing your own engineering from the live room, but it's also handy if you have an electronic drum kit in the studio, as you can start recording from wherever you're sitting. A mic-stand adaptor will be available as an accessory, so mounting isn't a problem. You could also adjust your monitor mix settings from inside a vocal booth, or record that piano in the next room. It's also useful for controlling playback when you're standing outside the room to get a better idea of the general mix balance. Those with noisy computers will find the Tranzport useful in allowing them to record vocals or acoustic instruments a little further from the computer. Another great application is if you use your Mac or PC to play pre-recorded parts during a live concert, as it means you don't need the computer right next to you all the time.

Installing the software took around five minutes, after which the three-page PDF manual told me all I needed to know about working with the Tranzport and my chosen DAW. A separate mini-manual is provided for all of the major DAWs so there's no translation between platforms involved. The unit worked as reliably and positively as any hardware controller and I soon came to rely on it — I even used it to operate my DAW from my office next door to the studio while writing this review! A green LED on the unit shows when it is communicating with the receiver; if you get out of range, the LED goes out. The typical range of the system is around 10 metres depending on the environment, so it may be rather more or less depending on the construction of the building you are working in. In my house I was getting a range of around 8 metres, even though two walls were separating the transmitter and receiver and the batteries were far from new.

For anyone using one of the supported DAWs who needs a simple hardware transport controller, the Tranzport is ideal, but its remote capabilities make it much more useful than a simple desktop controller. It does exactly as claimed without fuss, and the designers seem to have covered exactly the right key features required for general control and overdubbing, without falling into the trap of making the unit too complicated or too expensive. I'd recommend it to anyone — but not before I've bought one for myself!

There are very few 'must have' studio accessories at the moment, but if your studio is based around a computer, this has to be one of them!