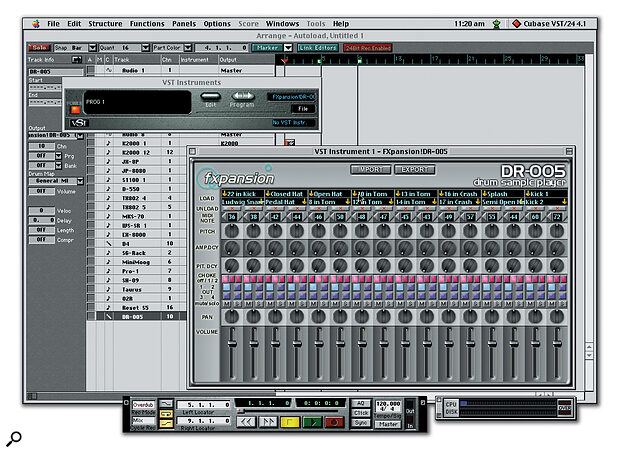 Reflecting the growth in the number of VST Instrument plug‑ins, as opposed to those designed purely for processing or effects treatments, established plug‑in developers FXpansion have now produced DR005, a 'soft drum machine'. Paul Ward snares a copy...

FXpansion's range of graphically pleasing, no‑nonsense effects plug‑ins have been available for some time, and have proved popular enough to spur the company to continued development. Their new DR005 'Drum Sample Player' is a VST 2.0‑compatible instrument plug‑in that aims to deliver instantly gratifying drum machine capabilities to your sequencer.

The idea is certainly not new. Steinberg's LM4 had much similar aims, but earned some mixed reviews based upon its excellent specifications, yet clumsy interface (see SOS July 2000). FXpansion have clearly seen a market for a simpler drum sample instrument.

The yellow arrows at the top of each sample channel strip are supposed to show which sample is loaded into which channel, but they're not exactly the most unambiguous of indicators!

The interface is certainly more user‑friendly. At the top of DR005's plug‑in window is a row of file‑name boxes. Clicking on these boxes and navigating to some sampled material loads sounds into channels ready for playback — simple.

Samples may come from anywhere on your computer — you don't have to keep them all in a particular folder. DR005 is currently restricted to WAV format for the PC version and AIFF for the Macintosh. Various bit depths are supported on the PC, including compressed WAV files; on the Mac eight‑, 16‑, 24‑ and 32‑bit uncompressed AIFFs should work, but I have to say that when I tried some 24‑bit samples, I got little more than a distorted mess!

DR005 will load stereo samples, but the left and right signals are summed to mono during playback. This is a shame, because it precludes recording your own drum samples in stereo with room ambience, thus freeing up valuable processor cycles. I found that there was also a nasty tendency for Cubase to crash on my Mac if I attempted to load a sample that was too big for available memory.

To preserve screen space, each pair of file names is stacked above two fader channels. I found that this could get a little confusing. There is a yellow arrow that attempts to point out with which channel each file‑name slot corresponds (see left), but my eyes did not take easily to this cue. I received the same feedback from a few others that tried out the DR005, so I'm obviously not alone — maybe the graphics could be enhanced to give a more obvious link?

But this is minor carping. All of the other controls are stacked in a single channel and will present no problems to a typical user. Sixteen channels are offered, all with identical facilities. At the top of the control window are Import and Export buttons; the latter allows the current settings of DR005 to be stored in a single file. This file also includes all sample data, which makes it a very convenient method of archiving favourite drum kits, or swapping kits between sessions. FXpansion are even making several kits available on their web site. I managed to load a PC‑exported bank into the Macintosh version, although I had to reset some of the mute and solo buttons which seemed to take on strange settings following the import.

At the top of each of DR005's 'channel strip' is the Unload switch, which frees memory up by clearing that channel's sample (the file‑name box then reverts to displaying '<none>'). Beneath the Unload switch is the note number display, with attendant Up/Down nudge buttons for changing the trigger note. Sadly, there's no option to double‑click to enter note numbers directly, nor can you drag the Macintosh mouse up/down to scroll through numbers quickly.

Pitch is adjustable over a generous two‑octave range (one up, one down), which should cover most possible uses. DR005 also allows the pitch of a sample to be swept down from its starting pitch by a variable rate. This is great for generating certain kinds of weirdness, from pseudo‑Simmons 'cat‑sneeze' percussion to TR909‑soundalike bass drums. There is no way to change the depth of the pitch sweep from its preset value, but nevertheless, this is a nice bonus feature.

I'm a fan of long samples when it comes to drums, particularly for tom and cymbal samples, where the ambient decay can add a sense of realism to a mix. But there are times when it would be nice to have the option of shortening a sample, perhaps as a corrective measure to remove noise or ambience from the end of a sound, or to tighten up a ringing bass drum. DR005 allows you to do just that with its Amplitude Decay control (entitled 'Amp.Dcy' on screen). This is a simply brilliant feature, allowing you to fine‑tune samples so that they sit in a mix without all of that tedious flipping between drum machine and sample editor.

DR005 has four stereo outputs and these are selected for each channel by a group of buttons. Also amongst these buttons are the Choke Group controls. If you assign two or more sounds to a Choke Group these sounds will become mutually exclusive — so that closed hi‑hats cut off the natural decay of an open hi‑hat, for example. Two independent choke groups are provided.

The Mute and Solo buttons are very welcome, but of course they only work within the confines of DR005 — that is, you have to use the host program's Solo function to hear DR005 in isolation first, before you can completely solo individual samples. The channel strip is completed by the Pan control and a good‑sized Volume fader.

In use, the DR005 does its job with little fuss. I did discover a bug in the Mac version during the course of this review that could cause Cubase to crash in certain circumstances, but this was quickly fixed by an update which FXpansion sent on to me. Other than this, my time with the plug‑in was trouble‑free. I was able to play samples in real time from a MIDI keyboard in exactly the same way as I would have with a hardware drum machine. When a lot of activity required samples to overhang one another the processor load did increase dramatically, but this is no different to any other software sampler, drum machine, or synth. The sheer convenience of trying out different samples in context, and then exporting the whole shooting match to a single file is very liberating. Whether or not you choose to save the current kit to a single file, DR005's settings and sample assignments are stored along with your song data.

I tried DR005 with various sampled material, including loops and phrases, and was impressed by the immediacy with which I was able to work. DR005 calls itself a Drum Sample Player, but to think of it as 'just' a drum machine is to perhaps forgo some interesting applications. In addition to using drum samples, I found that pitch‑bends on sampled vocal snippets produced some strangely inspiring percussive elements, and I enjoyed triggering some E‑bow guitar phrases panned to various points across the stereo image.

I hope the DR005 goes on to great things; it certainly deserves to. I have already sent in a list of user requests, and found the developers to be very open and responsive. What's more, a new Mac version with increased polyphony is due very shortly.

In its current form, DR005 is all about simplicity, but don't be fooled into thinking that this implies a lack of functionality. Loading and auditioning samples is child's play and the mixer‑style layout is a natural interface for most of us. The amplitude decay control is inspired and the pitch sweep is a bit of quirky fun. OK, 24‑bit samples are not (yet) supported, neither is any velocity mapping — although it is velocity sensitive. But if such features are important to you, you really need to be looking elsewhere. DR005 delivers a solid, traditional‑style drum machine and does it very well indeed.

A deceptively simple VST 2.0‑compatible instrument that gets the job done with a minimum of fuss. Sample format restrictions and inability to use true stereo samples may put off some users, but at this price it is hard to think of anything that comes close. A true gem.