This compact stage monitor puts the foldback controls exactly where they're needed — right in front of the performer! 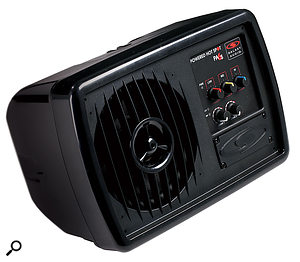 My first experience with miniature powered monitors was with a much earlier Galaxy model, the Hot Spot system, and I have to admit that the idea made a lot of sense. While physically small speakers are incapable of reproducing really low frequencies at high SPLs, they can be very loud in the mid- and high-frequency range. For most stage-monitoring applications, including vocals, this is good enough, as plenty of low end leaks back from the main PA anyway, due to the fact that low frequencies are relatively omnidirectional.

This latest incarnation of Galaxy's shoebox-sized personal monitor is the PA6S, a two-way design with a published frequency response of 50Hz to 20kHz. To keep its weight down, the enclosure is made from a tough, moulded plastic, and it has an integrated grab handle at the top.

The PA6S is based around a 6.5-inch neodymium woofer with a 96g magnet, teamed with a 1.5-inch titanium-dome tweeter. Earlier Galaxy monitors used a conventional metal speaker basket, but a few years back they switched to a moulded ABS-plastic basket, which further helps to reduce weight.

This driver's exceptional power handling of just over 150 Watts comes from the use of a long-throw cone and a robust roll surround. Ferro-fluid is used in the voice-coil gap to aid cooling in the woofer and the tweeter. Also featuring a neodymium magnet, the titanium-dome tweeter (which is mounted in front of the woofer) is rated at 60 Watts, and handles the frequencies between 1kHz and 20kHz.

Power for the drivers comes from a 170W amplifier, which on the face of it seems pretty hefty, given the size of the monitor, although the cone driver is not particularly efficient, at 88dB (1W, measured at 1M), so plenty of power is needed to achieve the rated SPL. A preset compressor/limiter is built in to help avoid overloads, and an LED on the front indicates compressor activity.

Up to three inputs can be mixed together, via a pair of XLR/jack 'combi' connectors for mic/line use, and one 3.5mm jack for connecting MP3 players and the like (the level of which must be controlled at source). A recessed panel on the front houses controls for a basic low/mid/high EQ section, plus gain controls for the two XLR/jack inputs. 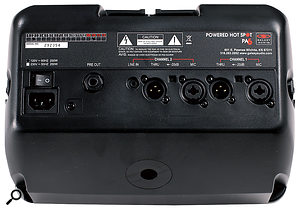 Unusually, the 'Thru' outputs work at microphone signal levels, so they can be patched straight into the mic inputs of a front-of-house mixer. They also pass phantom power from the mixer, allowing capacitor mics to be used with the PA6S.

All the connections are on the rear panel, including the inputs, a preamp output jack (this provides a line-level mix of all the inputs), and Thru output XLRs for each of the two mic channels. These work at mic level, meaning that you could plug your vocal mic directly into the PA6S, and then use the Thru connector to feed a PA mixer. Having this facility on both channels also means that two singers could share one monitor, or that a singer/guitarist could have separate controls over the voice and guitar monitor levels, while still sending the separate signals on to the front-of-house PA system.

The PA6S doesn't actually provide phantom power, but as a test I connected the Thru output to an external mixer with its phantom power engaged. Powering a capacitor mic by plugging it into the PA6S confirmed that phantom power is passed from the connected mixer through to the PA6S's mic input.

At the front of the unit is a blanking plate, which can be removed to allow the PA6S to accommodate an optional wireless receiver for cable-free use (other than the mains cable, of course). There doesn't, however, seem to be any option for feeding additional passive speakers, as there was with some of the earlier Galaxy systems.

Mains comes in on a standard IEC socket, and the operating voltage is either 230V or 115V, depending on the region where the unit was purchased.

With any stage monitor, it is essential to position it where the microphone is least sensitive, so as to reduce the risk of acoustic feedback. The PA6S has a mounting point in the base that can be fitted to a standard mic stand using the included adaptor, but another option is to split a standard boom stand, using the lower half to support the monitor and then fitting the upper half into the slotted mounting point, on top of the case just forward of the handle. This saves on stands and puts the speaker in pretty much the optimum position. Alternatively, side slots allow for yoke mounting in fixed installations.

When the PA6S is used as a vocal monitor, which I'm guessing will be its main application, the sound comes over as surprisingly well balanced for such a small box, with lots of clarity and a decent low-mid warmth. The deep lows are missing, much as I'd expected, but the spill from the main PA more than fills in for that in most cases. The main thing is that you hear a clean vocal sound that makes it much easier to pitch than a muddy monitor mix does. I did, however, find the PA6S a little prone to high-pitched feedback at higher volumes when all the EQ controls were set flat, so I backed off the high EQ slightly, and this seemed to help. In most real-world situations, feedback will set the maximum volume limit well before the PA6S runs out of headroom and, indeed, the only time I got the compressor LED to show signs of life was when turning up the gain so high as to deliberately provoke squeals of feedback.

As a comparison, I set up the PA6S alongside my own Mackie SRM150, which is almost identical in size and of a similar street price. The clarity and level before feedback was broadly similar, but the Mackie was a little less prone to high-frequency ringing when running close to feedback levels. The SRM150 also felt a little more substantial, although I have no doubt that the PA6S will survive normal road use with no problem. I did prefer the straight link-output feature of the PA6S, compared with the Mackie's PA feed, which is post-preamp.

In all, then, the Galaxy PA6S is a practical and well thought-out piece of kit that provides a convenient way of dealing with the issue of stage monitoring.

The Mackie SRM150 is the closest alternative in terms of the number of inputs, output power, size and price. Another similarly compact active stage monitor is the WPM1 from Wharfedale.

A practical, compact and good-quality vocal and instrument monitor for smaller venues.