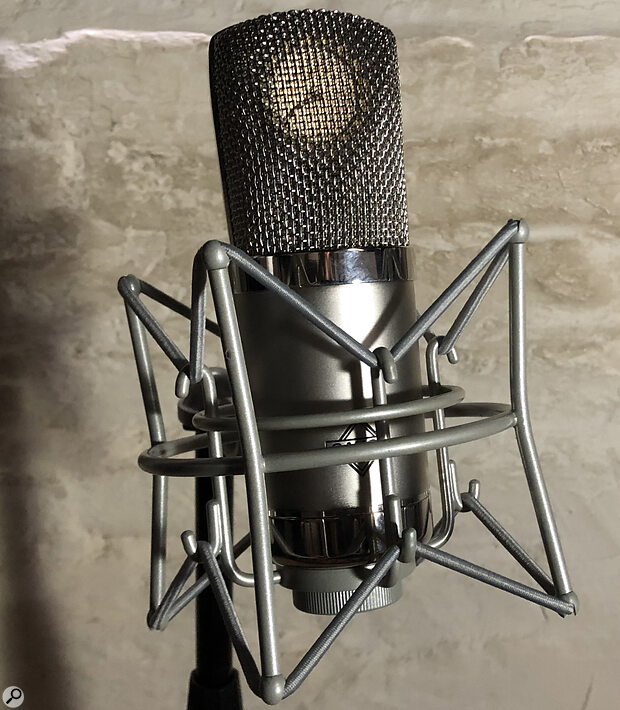 This classy valve mic proves its worth on a range of sources.

The Gauge ECM‑47 is a variable‑pattern valve microphone built around a two‑sided, 1.38‑inch capsule fitted with six‑micron, gold‑sputtered, centre‑terminated diaphragms. Finished in bright chrome with a satin chrome sleeve, the mic has no pad or roll‑off controls on its chunky body or on the power supply, which is slightly unusual, but otherwise follows the conventional format for a multi‑pattern valve mic.

Supplied in an aluminium case with a lined wooden box to hold the mic itself, the ECM‑47 comes with a pop screen, elastic cradle shockmount, power supply and a 7‑pin XLR cable to connect the mic to the power supply. A voltage selector switch on the PSU offers a choice of 110 or 220 V 50/60 Hz. A rotary pickup pattern control switch located on the front of the power supply allows nine polar patterns to be selected, from omnidirectional, via various widths of cardioid, to figure‑8. Power comes in via an IEC socket and mains switch, and this being a valve mic with its own PSU, phantom power is not required, though applying it accidentally won’t blow anything up. The audio output is on a standard 3‑pin balanced XLR.

Unscrewing the heavy base ring allows the body sleeve to be removed, revealing a single circuit board, neatly built and populated with good‑quality discrete components that include WIMA film capacitors and parts from Panasonic, NEC, NSC and other premium manufacturers. A separate output transformer is located just above the output connector and the valve is fitted into a ceramic base. The valve is a Russian‑made 6072A/12AY7 dual triode from the Electro‑Harmonix‑owned factory there, and it is held in place by a heat‑resistant silicone band. I noticed that it’s possible to reattach the body 180 degrees rotated, in which case the logo ends up on the back side of the mic rather than the front, so take care to fit it the same way it came off if you do decide to have a look inside.

The mic’s frequency curve changes depending on the pickup pattern selected, but in general there is a slight mid scoop augmented by a presence hump, with a further peak at around 10kHz, which suggests it may add some airiness to the recorded sound. The nominal response is 20Hz to 20kHz, though the curve between those two points deviates from flat in several other areas as well as the presence peaks — but that’s what gives this type of microphone its character. A maximum SPL of 135dB is specified, while the sensitivity is a typical 16mV/Pa. An equivalent noise figure of 18dBA is specified, which is about what you’d expect from a valve mic.

All valve mics take a few minutes to settle after being powered up, and Gauge also recommend allowing a three‑minute settling time when switching patterns.

This mic delivers the kind of lower‑mid heft that you’d expect from a good valve mic, balanced by a smooth high end that captures detail but without sounding in any way harsh.

On male vocals, with the pattern set to cardioid, this mic delivers the kind of lower‑mid heft that you’d expect from a good valve mic, balanced by a smooth high end that captures detail but without sounding in any way harsh. Overall, the impression was generally flattering. There was also no tendency to exaggerate any sibilance in the source vocal. I found the optimum working distance was around 25cm from the mic, and even without a separate pop screen in place, there was good resistance to popping — though, for persistent poppers, use of the included screen would be advised. If you work closer to the mic, the bass lift due to the proximity effect is evident, though this becomes less so as wider cardioid patterns are selected, and disappears in omni mode. Going in the other direction, the closer you get to a figure‑8 pattern, the more pronounced the proximity effect (as is invariably the case), reaching the point where a bass‑cut switch might have been a useful addition. Apart from that, the tonality on vocals doesn’t change significantly between patterns, except inasmuch as it’s influenced by the amount of room ambience that is picked up.

On other sound sources the impression of a gently flattering sound remains: the mic sounds solid and detailed without being too obviously hyped in any way. I was particularly impressed by the performance on an electric guitar amplifier: with the mic set up around 30cm away from the speaker and a little off‑axis, the recorded sound was pretty much as I was hearing the amp from my seat a few feet away.

On balance, the ECM‑47 is a strong performer given its non‑exotic pricing, and the pairing of selected Chinese capsules with audiophile circuit components seems to have paid off. There’s still strong competition in this price range from the likes of Sontronics, sE, MXL, Warm, Golden Age and so on, but I’d recommend you audition the ECM‑47 if possible, as it can seemingly turn its hand to just about anything.