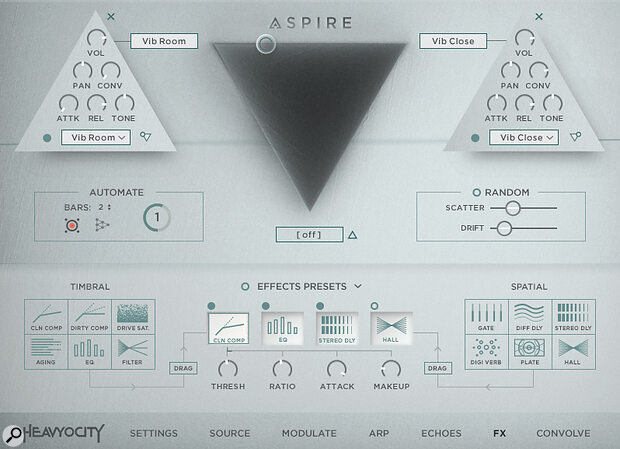 When not dropping school buses from cranes, shattering car windscreens with sledgehammers or maniacally whacking waste containers with iron bars, Heavyocity keep themselves busy producing innovative orchestral libraries. Standing alongside the company’s arsenal of industrial‑strength percussion are Novo Modern Strings, Forzo Modern Brass and Vento Modern Woodwinds libraries, each combining traditional and hybrid elements with visceral sound design to create a powerful virtual orchestra of the future. That orchestra has now been expanded by Aspire Modern Mallets, which introduces tuned percussion with a distinctly modern twist.

Aspire features two instruments no serious sample user should be without, namely marimba and vibraphone. Both were recorded playing straight long notes and a separate softly‑played ppp layer from close, room and under‑the‑instrument mic positions, while the vibes player adds a set of muted short notes. Also included are bowed vibraphone, granular‑synthesis treatments and an ambient pad which blends both instruments.

Powering these sources is Heavyocity’s triangular Ascend mixer, which allows you to crossfade between three patches by clicking and dragging a cursor around the triangle. These actions can be recorded, modulated and randomised, enabling you to add dramatic ear‑catching movement to your mixes.

While the two instruments sound fine in their natural state, the main thrust of the library is its processed material. The producers have thrown in a versatile arpeggiator, a musically intelligent MIDI delay/repeat and tempo‑sync’ed convolution effects including reverb, reverse and a rhythmic gater. Coupled with a large suite of master effects, the results are transformative. Presets such as ‘Octave Angels’ sound like the magical chimes of a heavenly clock, while the beatific ethereal wash of the ‘Wandering Tones’ and ‘Creeping Shivers’ pads is a delight. In a similar vein, the celestial ‘Sleepy Chatter Bows’ is ear candy of the highest order, an invitation to play slow, sparse dreamy melodies and wallow in the preset’s lush endless reverb. (Sorry, beginning to sound like a bath salts ad there.)

In the rhythmic department, I liked the propulsive rippling 16th‑note marimba ostinatos of ‘Ascending Mallets’ and ‘Rise and Fall Once’, both of which work well with chords. ‘Random Compute’ ensures you never get the same note pattern twice (part of the fun of arpeggiators), but the charming ‘Muted Raindrops’ offers a simpler and more predictable eighth‑note option. Unusually for this company, there’s no heavy or scary stuff here: ‘Overdriven Sequence’ is only lightly distorted, and ‘Haunted Organs Rising’ is a tranquil rising arpeggio. Though some presets are listed with a key signature, you can make them fully chromatic by activating all notes on the Echoes page.

A far cry from the bone‑splintering hits and impacts found in Heavyocity’s Damage and Symphonic Destruction libraries, Aspire succeeds by blending two superb instruments into beautiful hybrid textures. The library is 5.44GB installed and runs exclusively on Kontakt or Kontakt Player 6.6.1 or later.