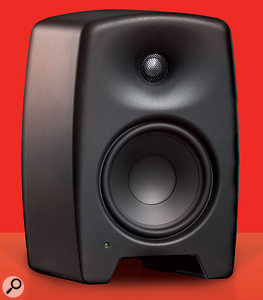 Although it can feel as though there's a never-ending deluge of active monitors these days, the arrival of a new range from Genelec is always an event, especially when it signals their move into a different sector of the audio market. At the 2013 Frankfurt Pro Light & Sound show, Genelec launched the M030 and M040, the first products in their new M-series of active monitors. These speakers are targeted at the mid- to high-level project and home studio, as well as songwriters, musicians, music students and the like. The new range also introduces an element of environmental sustainability into Genelec products.

In terms of appearance, the M030 follows the usual Genelec small-enclosure paradigm: a moulded grey cabinet with double curvatures to minimise diffraction and increase cabinet rigidity, and an integral moulded waveguide surrounding the tweeter. However, the rectangular tunnel formed by the sides being extended below the bottom of the cabinet indicates that the M030 has moved on somewhat from its predecessors.

The major change, though, is that the M030's Natural Composite Enclosure (NCE) is, as its name suggests, not the aluminium casting familiar from Genelec's 8000 series. The NCE is injection moulded in ForMi, an environmentally friendly, fully recyclable, wood-fibre-reinforced plastic composite developed by the Finnish company UPM. This new biocomposite is manufactured from pure polymers and wood pulp, with wood fibres replacing 50 percent of the oil-based plastics. In addition to the environmental benefits, ForMi also has excellent acoustic qualities, while its exceptional rigidity and low shrinkage during the injection-moulding process allows for thicker castings than can be made from conventional plastics. The end result is that the outer walls and internal bracing of the M030's cabinet can be designed to effectively control resonances and to maximise the internal volume, both of which are vital for low-frequency performance.

Looking at the review M030, you'd be hard pushed to notice any difference cosmetically between the ForMi composite and aluminium, and a quick rap with your knuckles will confirm just how acoustically inert this new material is.

The five-inch bass driver and three-quarter-inch treble driver are both new designs, as are the two Class-D amplifiers (50W for the bass and 30W for the treble). The new amps are discrete designs, and the result of five years of in-house development. Together, the amplifiers and drivers are said to be capable of delivering extremely low distortion and high SPL.

The bass driver's magnet assembly is braced on an internal 2mm steel plate that supports the driver, helps to stiffen the cabinet and acts as an internal seal for the low-turbulence reflex port. This port — a Laminar Integrated Port ('LIP' in Genelec parlance) — opens on the insides of the two front 'legs' of the cabinet. The arrangement is not only designed to reduce turbulence and the M030's sensitivity to boundaries, but also, when the cabinet is placed on a table, to use the table surface as a continuation of the port.

Adding to the M030's green credentials, its Class-D amplifiers are 90 percent efficient and incorporate Genelec's Intelligent Signal Sensing feature, which switches them to a low-power standby mode after 30 minutes of non-use, returning to full performance when an audio signal is again detected. The power supply is auto-sensing, so the M030 can be used anywhere in the world. 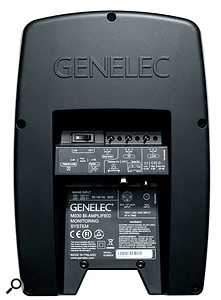 The rear panel houses the power and audio input sockets, as well as switches for tailoring the M030's response according to its placement in the room.

The M030 is extremely simple to set up. Its rear panel carries all the connectors and switches. The mains input (a consumer-style figure-of-eight lead) and the audio connectors (a combi XLR/TRS-jack socket and an RCA phono) hang vertically below a panel carrying three switches, each of which has three positions. The input sensitivity switch has settings for 0dB, -10dB or -20dB, while the bass level can be set to 0dB, -2dB or -4dB (at 100Hz), for free-space, half-space or quarter-space operation, respectively. Finally, the bass/tabletop EQ switch provides either a 2dB cut at 80Hz, for when the monitor is placed on a desk, or a 3dB low-shelf cut at 230Hz, for tailoring the M030's bass response in your room.

Once you've made the necessary connections and positioned the M030 with the tweeter at ear height, setup is simply a matter of setting the switches according to your input level and speaker placement. I set up the review pair of M030s angled in towards me on stands in free space, with the tweeters positioned at ear level. Since my listening room is well damped, the M030 user manual suggested that a -2dB cut in bass level was required. The back-panel graphics didn't quite agree, however, and suggested leaving it flat. As always, your own ears in your own room will be the final arbiter and, after listening to a few CDs I know well, I went for a flat bass setting.

To my ears, all Genelec active monitors share a similar sonic signature. Ever since I first used the three-way 1024 back in the '90s, I've been impressed by the lack of distortion at high SPLs, the neutral balance, the very slightly forward presentation and the precision, breadth and depth of stereo image that, to me, characterises a Genelec monitor. The M030 is no exception and, in listening to a wide variety of source material, from Deadmau5 and CoH at one extreme to solo piano and violin at the other, I found that it never failed to deliver as expected, and also ruthlessly exposed failings in both mixes and recordings. In other words, it functions exactly as a good monitor should.

With a low-frequency -3dB point at 58Hz, the M030 is probably more suited to working with tracks and sounds that don't feature enormous amounts of information in the extreme low bass. Having said that, the M030's reflex port design delivers a solid, uncompressed bass and this ensures that there's more than enough low-frequency information around to help you make the right decisions. However, good though the M030 is in the bass department, if you're predominantly working with sounds heavy in low frequencies, you might well be advised to take a listen to its larger sibling (the M040), which has its -3dB point at 48Hz.

The M030's mid-range reproduction is open, natural-sounding and very precise. I couldn't hear any anomalies around the crossover frequency. Up in the higher frequencies, the sound is very detailed and this, combined with the mid-range performance, delivers a wide stereo image with a solid centre, precisely positioned sources and a real sense of space.

The timing and integration of the drivers is impeccable, with the tweeter never sounding displaced or disconnected from the woofer. Overall, I could find nothing to fault in how the M030 reproduced whatever I threw at it. It was also untiring to listen to, even when I was concentrating hard on reverb tails and other low-level details.

One small point I did notice was that when I moved below the sweet spot, I felt that the sound changed a bit more abruptly than I'm used to hearing. This isn't an issue, but simply highlights the fact that you need the tweeters to be on, or pointed at, your earline when auditioning or setting up the M030. Although it wasn't available at review time, Genelec told me that an angled foam pad will be shipped with the M030, to assist in aligning it correctly.

The M030 represents a bit of a new frontier for Genelec. I think that the UPM ForMi injection-moulded enclosure could well be as big an influence on monitor design in the future as JBL's original Eon series was on portable PA.

In the context of its positioning as a mid-level/high-end monitor for small project and home studios, the M030 seems, to me, to be absolutely ideal. I drove the review pair unbalanced from a laptop headphone output, balanced from an external D-A converter and balanced from a mixing console, all without any issues whatsoever. Due to its small size, I can easily see the M030 also becoming the monitor of choice for live recording.

Finally, there is the small matter of the monitor marketplace and price point to consider. The M030 represents a considerable saving over Genelec's present professional equivalent, the 8030, while offering a similar, though not identical, level of performance. However, the M030 is entering a crowded territory where capable competitors are already fighting for market share.

As you've probably gathered, I was very impressed by the Genelec M030, and it is certainly one of the best small active monitors that I have heard. If you are looking for a pair of easily portable, high-quality monitors at this price point, I wouldn't hesitate to recommend that you audition the M030 at the earliest opportunity — which will arise when deliveries begin around August.

At a similar cost to the M030, high-quality active monitors from KRK, Dynaudio, Event, Adam, Neumann and Eve Audio, among others, are available. All are well worth auditioning and all offer serious competition to the M030.

A very fine active monitor that couples a high level of audio performance with an ethos of environmental sustainability. Highly recommended!