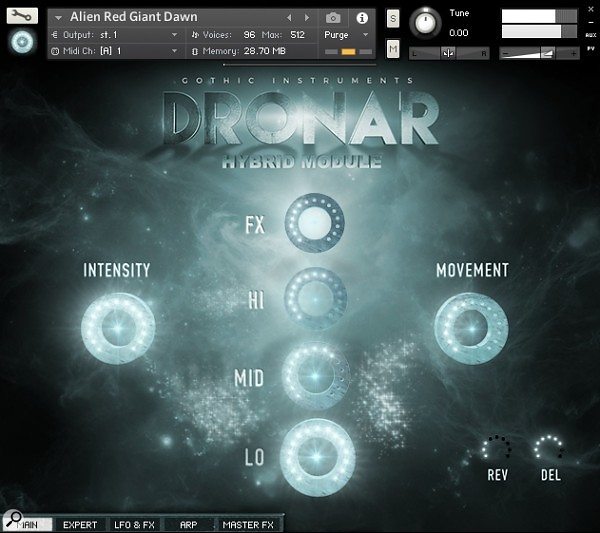 Dronar is a Kontakt instrument that translates the everyday into the epic. When fed with a simple triad chord, it cunningly fills out the middle range, provides a building-shaking bass and inserts highs to rival the most discreet online pharmacy. From an inviting interface, vast washes of sound can be animated by modulation, effects and arpeggios and topped off with an ambient sound effect. All that cinematic goodness emanates from source waves that equate to 16GB, although fortunately these are rendered in compressed form, reducing the download to half that amount. 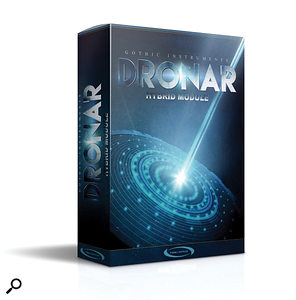 Once installed, Dronar is found in Kontakt’s ‘files’ menu rather than the more accessible ‘libraries’ option. Although extensive tailoring is available, the main panel has a mere half dozen dials with which to sculpt the Lows, Mids, Highs, FX, Movement and Intensity. Probably the first control to try after loading any of the 300 presets is the mod wheel. It’s routed to Intensity and is the most direct means of fading in the different layers. The Movement dial is equally useful; it sets the intensity of multiple arpeggiators — arpeggiators that include step-sequencer-style modulation of key parameters.

The patches are placed in categories such as Alien, Tension, Strange, Horror, Strings, Deep Space, etc, and they serve as brilliant starting points for composers into genres such as horror, crime, fantasy, science fiction and miscellaneous unpleasantness. I’m still trying to forget the terrified cries of the forest toads, apparently menaced by a JCB. And the monstrous but compelling ‘Organ Of God’ wasn’t an encounter I ever expected to have outside a bad mushroom trip. Only in the pad category are a few lighter moments to be found, suitable for a spot of new-age dolphin-fondling, perhaps. Gothic Instruments plan to explore a wider range in future modules (with discounts offered to Dronar owners).

While this collection is polished and contemporary, it can sometimes be a challenge to differentiate one vast, brooding backdrop from the next. However, that’s my only complaint as the quality is consistently high. If I had to pick an instant favourite, it would be the strings, which are superb. Top marks should go to the sound designers who have made each creation a near-perfect thing already, just awaiting chordal input.

Speaking of input, less is definitely more and the simplest chords invariably worked best. Dronar expands them in ways that would tax a dozen trained octupi, with a humble triad demanding 54 notes from Kontakt in one example! Continuing with the effort-free theme, rapid but significant sonic tweaks are there for the taking, especially when you replace the mouse with a hardware MIDI controller.

Until now, I’ve always associated the term ‘atmosphere creator’ with our elderly Patterdale terrier. Dronar is just as difficult to ignore, offering as it does a significant chunk of finely-produced, often luxurious material at a very reasonable price. Whether you’re into dark drones or questing for the ultimate pad, ambience or tripped-out cinematic moodgasm, it comes highly recommended.