Graphtech's ResoMax NVS Bridge is available in a range of sizes to fit the majority of Gibson SG and Les Paul guitars (as well as many copies, of course) that were originally fitted with Tune‑o‑matic bridges. It's claimed to enhance harmonics, maximise sustain and minimise string breakage — all of which are desirable whether you're playing live or recording. The bridge has a 52mm post spacing, and both 4mm and 6mm post sizes are catered for. Posts and threaded body inserts are included, though you could simply use the ones already fitted to your guitar if you prefer.

Graphtech's ResoMax alloy has been used before in bridges with the company's low‑friction composite saddles, but this model uses saddles made of the same alloy. These are coated with a grey, low‑friction material, to help stabilise tuning and reduce string breakage at the bridge. The bridge is available in chrome, gold, nickel or black, and triple‑plated to give it a traditional appearance. You'll probably do a double take when you pick it up — the surprise being that it weighs almost nothing! 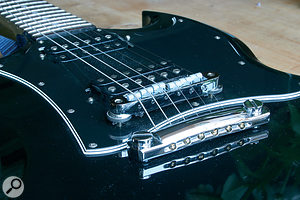 The ResoMax bridge fitted to the author's Gibson SG.Instinct might suggest that a heavier bridge should give you more sustain, but this isn't the case, because you tend to get the best tone and sustain from a non‑tremolo solid‑body electric guitar when the bridge transfers the string energy directly to the body — and that dictates a very light, but rigid bridge. A further innovation, which doesn't affect the tone, is the use of a couple of tiny magnets set into the undersides of each end of the bridge. These secure the string posts so that the bridge doesn't fall off when you're restringing. This 'AutoLock' system works best when you use the bridge posts and inserts that come with the bridge, but they also provided some degree of hold with the original posts of my own Gibson SG.

A tailpiece made of the same ResoMax alloy is also available, and I installed this at the same time. It too comes with posts and inserts, though in this case I chose to use the ones already fitted to the guitar. The same AutoLock magnetic system is fitted to the tailpiece and locks effectively to the plated-steel posts supplied. However, these didn't fit the threads in my guitar's body inserts, and as the original posts are non‑magnetic, the AutoLock couldn't provide any 'grip'. I could have simply changed the body inserts to allow me to use the supplied posts, but I preferred not to risk damaging the paintwork by extracting the old inserts.

The new tailpiece was just a hint too deep to fit into the recesses on my original posts, which meant that I had to run it back and forth on a piece of wet and dry paper on a flat surface for a few minutes to remove the plating from each end of the underside. After that, it fitted perfectly.

Fitting the ResoMax NVS bridge was trivial, as it simply drops over the original bridge posts, although I had to adjust the bridge height slightly, as the saddle height turned out to be marginally different from that of my original bridge. Once in place, it looked almost identical to the original, other than the grey saddle coating, which few people would notice.

Rather than change the strings at the same time, I kept the same strings so that I'd get a more accurate before‑and‑after picture. I was surprised to find that as well as the overall tonality being very slightly brighter, the guitar body also seemed to be contributing more towards the mid‑range, and the already impressive sustain of my SG was further enhanced.

The tonal improvement was definitely real, and the best way I can describe it is to say that the old bridge was somehow keeping the tone away from the wood, whereas the ResoMax NVS was allowing the wood resonance to make a fuller contribution to the sound. Before surgery, the neck pickup sounded somewhat dull, but after fitting the new parts it took on a more lively edge. I experienced no tuning problems, and setting the intonation worked in exactly the same way as on the Tune‑o‑matic bridge it replaced.

If you want to really finish the job off nicely, Graphtech now make a synthetic ivory-white Tusq XL self‑lubricating nut that is visually identical to the original. This has correctly cut slots but is a couple of millimetres deeper than the original, to allow the user to file the underside to adjust the action. I've fitted Graphtech's black low‑friction nuts to many of my other guitars and I find they really help tuning stability if you do a lot of string bending or use a vibrato bridge. Having the option of ivory white is a nice touch if you're concerned about cosmetics.

Most replacement bridges are, in essence, clones of the originals, and while there are other companies exploring lighter alloys, this Graphtech bridge is the only one I can think of that combines light, rigid alloys with low-friction saddles. Although they aren't exactly cheap — at around £100$115 for the bridge and £60$70 for the tailpiece — the ResoMax NVS bridge and tailpiece appear to do exactly as claimed, and other than the grey saddles, the appearance of the original parts is maintained. As you'd expect, the bridge makes more sonic difference than the tailpiece, so if you can't afford both, just upgrade the bridge. Paul White

An elegant and effective replacement bridge for Gibson Les Paul and SG guitars, which enhances tone while reducing string friction over the saddles.