Here you can see I'm using Mixbus as the mixer for my Logic session, a great way to get your feet wet with the new program. Easy access to EQ and compressor controls is one of its strengths. Note the red gain‑reduction meters of the compressor.

Does the pro audio market need another digital audio workstation program? Harrison Consoles and Ardour believe the answer is 'yes'...

Just about every music production professional, amateur and even dilettante is already committed to one of the current crop of major digital audio workstations, and so fully entrenched in its eccentricities that switching to another is probably not a viable consideration. |t was with this notion in mind that the makers of Mixbus set out to create a new DAW that, while not reinventing the wheel, improves in areas where others fall short and offers something no other DAW can boast: a million‑dollar mixer.

Mixbus is a customised Mac OS X version of the open‑source program Ardour (which, unlike Mixbus, is also available for the Linux platform). Broadly speaking, it combines the existing Ardour recording and mixing functionality with a custom mixer. Mixbus itself is thus not open‑source, as the mixer uses proprietary code developed by Harrison Consoles. Many of the features described in this review are, of course, common to Ardour and Mixbus, but for the sake of simplicity I'll refer to Mixbus throughout.

In case the name Harrison is not familiar, to you, they are best known for the top‑end, large‑format consoles used to mix all your favourite films, as well as a little collection of toe‑tappers called Michael Jackson's Thriller. With that kind of credibility, you have to take notice when they claim to have created a virtual mixer based on their 32‑series and MR‑series consoles, especially when it's being offered at an introductory price of $79.

Jack In The Box

To get started in Mixbus, you first need to set up Jack Pilot. Jack is a separate, free application that enables simple to complex routing of audio inside your Mac. Jack recognises any Core Audio interface, and has a simple workaround for use with the internal Mac soundcard. Setting up Jack is pretty straightforward and, besides allowing you to use Mixbus, it also enables other cool routing options, such as piping the output of iTunes into your DAW. The other added benefit of using Jack is that if you want to use just the mixing element of Mixbus, it will allow you to run the output of your favourite DAW tracks into Mixbus. This is a very enticing feature, since it allows users to continue using their current DAW, yet have their tracks mixed in Mixbus. More on that later.

Once you've opened a session in Mixbus, you're greeted by a window that should look pretty familiar to users of other DAWs: tracks going down the left side, transport on top, and loads of buttons and switches to call up different functions. Pretty standard, right? Not so fast. The transport area holds more functions than any other DAW I've come across. Fortunately, handy tooltips aid in acquainting yourself with the program. It's clear that the makers of Mixbus set out to combine well‑loved features from other DAWs while avoiding the quirky and sometimes cumbersome flaws of others.

After noodling around for a bit, I started to notice that almost any function can be accessed through right‑clicking. On the surface, that doesn't sound like a big deal, but when you begin to realise that you don't need to have a certain tool selected in order to get to a function or menu, it becomes apparent that, after a little time spent with Mixbus, you can get things done a lot more quickly.

Since Mixbus is, in part, marketed as a DAW for audio professionals who've learned their craft on large consoles, it's not so surprising to see that it provides several tape‑style features that conventional DAW users may find odd. The destructive audio recording option, for instance, may not have much allure to DAW users. However, the choice to use Snapshots rather than the conventional 'Save As' command to store successive versions of a project is rather captivating. I found it quite useful for quickly going back and forth between different groups of edits. I'd love to see this employed on other DAWs, since it is more efficient than 'Save As' and more intuitive than Undo menus.

For a new kid on the block, I was surprised to see such advanced features as a momentary timecode readout that appears while moving regions around the arrangement. Additionally, the shuttle wheel is very impressive, allowing you to speed up and down and scrub back and forth in either tape‑style (pitch‑changing) operation, or in a modern style with no pitch change.

There's also an intuitive and flexible looping and auto‑punch feature that should appeal to home studio producers who record themselves often. It enables you to select a region to loop and a separate region to punch in and out. It's one of the cool little things about the Mixbus software that sets it apart from the pack. 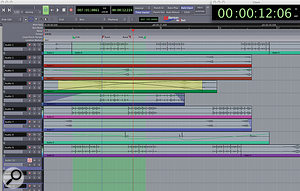 While many potential users may be attracted to its million‑dollar mixer, Mixbus also sports a feature‑rich DAW.

The Ardour DAW is clearly a great program on its own (more info at www.ardour.org), but let's face it: potential buyers are going to be lured to Mixbus for the Harrison mixer. Mixbus's mixer was designed by the same engineers and designers who develop Harrison's hardware mixers. Besides the layout, the knobs and sliders have the same response as their hardware counterparts. Some knobs allow you to use your scroll wheel to dial in minute changes. At first, it seems limiting to not be able to tweak every parameter but, in fact, hidden menus do offer a lot of configurability — and of course you can't change the configuration of a hardware console in real time.

Each channel strip provides three‑band EQ, high‑pass filter, four sends, and a compressor. The actual mix bus section has four stereo channels with three EQs (which are different from the channel EQ), compressor and tape‑style saturation. I'm not a 'submix guy' but in Mixbus, these are so attractive that I immediately found creative combinations of instruments to send to the buses.

Besides its internal routings, Jack allows for hardware inserts, so you can use your favourite outboard gear. Mixbus even does a ping test to calculate delay compensation.

A great pedigree and cool feature list do not amount to much if the program doesn't work, so let's see what Mixbus can do. For my first trial, I loaded in some tracks that I had output as audio files from Logic. The first speed bump I faced was that the program wouldn't determine whether a file was stereo or mono and create an appropriate track. This means a little more planning ahead of time to create tracks and then bring in the files in groups. Not a big deal, but hopefully it can be improved.

Since I knew I wouldn't be editing, I jumped straight to the mix window. The mixer has the look of an analogue design and is a refreshing change from the stark and slick look of other DAWs. Once the tracks were pumping through the mixer and the meters were dancing, I again noticed what a comfortable environment Mixbus is.

The EQs are smooth and provided what I needed, and if you need more detailed sculpting, there is no problem, since Mixbus supports Audio Units plug‑ins. The compressor is extremely flexible, offering levelling, limiting and compression, and having the channel's compressor settings and meters visible on the console's surface is another feature that contributes to making the mixing process more enjoyable and less tedious. I appreciated the convenience of having these controls on the mixer with no windows to open and no panels to click, hold, scroll, hold and unclick. Mixbus's creators were definitely thinking outside the box for mixing in the box.

The bus section performs its duties as expected and, if used conservatively, the tape saturation feature adds some extra… I don't want to say 'warmth'… I'm not going to say 'warmth'… more like smoothness with a bit of grit, if that makes sense. OK, fine, call it 'warmth'.

My mix came together rather quickly and sounded great. How did it compare to the original mix? Actually, it was pretty close (well yeah, I used the same ears on both of them); perhaps the Mixbus mix was a little punchier and had a more scooped mid‑range. But here's the thing: I put that mix together in half the time, and had twice the fun doing it. This is, to me, what makes Mixbus worth owning and using. As someone who spends five to 10 hours a day staring at Logic, bringing the tracks into Mixbus makes me feel like I've gone to another studio to mix.

Automation worked very well and, as on most DAWs, tweaks can be made in the tracks window with visible nodes. This is where the snapshots feature really comes in handy for switching between different versions.

As I mentioned earlier, because of Jack's super routing options, getting audio from one application to another is possible. So my next test was to play a Logic session and route it into Mixbus. After a fair amount of setup, to my surprise it worked! Even though it's not the intended way to use Mixbus, it may be a fun way of testing a mix before exporting your tracks.

The next test was to forego Logic altogether. After all, Mixbus provides a full‑featured DAW, so why not start the project there from the beginning? Well, the problem is that Mixbus currently doesn't support MIDI, which means no soft synths or samplers. MIDI is in the works, but for the moment, this omission may dissuade legions of potential buyers. In its absence, I brought in some loops and recorded some bass, guitar and vocals. I toyed around with the tracks and found that I was able to get results pretty quickly. As I mentioned earlier, Mixbus has much in common with other popular DAWs, so the learning curve, while present, isn't terribly steep.

For the next few weeks, each time I found a few spare minutes, I went into a Logic session, disabled all the plug‑ins and automation and exported my tracks. Later, I would bring them into Mixbus and spend some time tweaking and experimenting; not because I required new mixes, but because it was fun. It's really calming to say to yourself "No more writing. No more editing. It's done.” Then put on the mixer's hat and use a different part of your brain. That's why I'm going to keep Mixbus in my rotation.

Mixbus isn't going to appeal to all musicians, especially as it doesn't have MIDI support at the moment, but I can certainly see it catching on with musicians who feel that mixing is an area of production that could use a fresh perspective. At its introductory price, I can't see why anyone wouldn't give it a try.

While it's no Logic or Pro Tools killer, Mixbus offers some new DAW concepts in a user‑friendly package. A great supplement to any music production Mac system.