Kicking off the collection there are two folders featuring a couple of hundred drum loops, in both Acidised WAV and REX2 formats. Ranging in tempo from 72 to 96 bpm, the loops are pretty well put together, with the first folder housing full beats and the second containing just kick and snare patterns. Unfortunately, a few too many of the loops use the same — or at least very similar-sounding —drum hits, so it all begins to sound very 'samey' quite quickly, and ends up feeling more workmanlike than inspiring.

In addition to the drum loops, there are shaker, hi-hat and hand-percussion loops, and although these are mostly programmed they're always a nice addition for building up a chunky rhythm track. Alongside all the loops there's also a hefty chunk of percussive hits. These are very welcome, but again they feature lots of variations on the same hit (either pitched up or down). There is also the now-ubiquitous small selection of rubbish scratch-samples.

As you move into more melodic territory, though, this collection begins to up its game with a fine selection of sweet-sounding chords, featuring keys (clavinet and piano), brass, guitar, synths and strings. The quality of the sounds is high — so I'm happy to overlook the fact that none of the sample names include which chord is being played.

Loop-wise, the melodic elements are tucked away under the heading of 'harmonics'. Again, this is a well-chosen selection of phrases, this time using bells, synths, keys, organs and strings. Although these are nicely produced and sound great, the majority don't really 'sit' with the hip-hop/R&B theme — in fact, they sound more like slower-tempo dance loops — and this is especially true of the selection of synth arpeggios, which would nearly all sound totally out of place within the current hip-hop/R&B scene. Also, some of the licks are at higher (and lower) BPMs than the included drum loops, making it difficult to mix and match loops. It also seems very odd to me that there are no real bass sounds or loops included, except for a pretty poor selection of one-shots, once again with no note information included in the sample's name.

HipHop & RnB has been a really tricky collection to review, because although there are flashes of excellent-sounding content, very few of these loops and samples seem to hit (or in some cases come close to) their urban-themed target. The result is a collection that's unfocused and weaker on its core genre than it really should be for the price. Oli Bell

Ueberschall's Adlibs is a further volume in the Liquid Instruments series, and like the rest of the collection it provides a loop or phrase library that's accessed through a custom version of Celemony's Melodyne. This gives these libraries something of a twist, as not only can the phrases be sync'ed to the host project tempo but, within certain constraints, the timing and pitching of the phrases can also be adjusted. We've looked at other libraries in this series (LI Saxophone in SOS February 2006 and LI The Voice in SOS April 2007) and those reviews include a more detailed discussion of the front end, so I'll concentrate here on the sample content of this latest title.

Adlibs features over 2400 vocal phrases, performed by five male and three female singers. The phrases were recorded at 24-bit word length and require about 800MB of hard drive space. They're split into 'verbal' and 'non-verbal' categories, with the former dominated by proper lyrics, and the latter containing more of the 'wooahh', 'yeah' and 'oohhhh' type material. The phrases are organised into small groups based upon a particular singer and the original recording tempo.

The musical styles would suit pop, dance, R&B and hip-hop. One or two of the singers fall clearly into one style or another. For example, the male-voice phrases provided by Bazz are mostly at tempos below 90bpm and are generally spoken rather than sung — they're not quite rap, but the attitude is fairly macho hip-hop. In contrast, the phrases provided by Danny are much more R&B-friendly. Of the female singers, the phrases from Nathalie have plenty of get-up-and-go, and they'd suit a range of high-energy dance styles, while Inaya's vocals cover a much broader range, with some material suitable for R&B and some moving into dance or rave territory. In several cases, small groups of three or four related phrases are provided. These might be the same lyric but sung with slightly different timing and/or melody, or phrases that might be linked together. However, there isn't really enough to build a complete vocal line, which means that the 'Adlibs' title is accurate — and the library is perhaps best considered as a collection of vocal hooks that could be placed in instrumental tracks.

While the Melodyne engine gives additional flexibility, you're obviously still tied to the lyrical content of the phrases, and this is a bit of a mixed bag. The majority of the material is based on tried-and-tested pop and dance clichés, which is actually a good thing, given that the phrases are best used as vocal hooks. Some of the more unusual lyrics are perhaps more difficult to imagine in this role, but that said, there's plenty of raw material here — and if you work in these styles and you require some occasional vocal ear candy, Adlibs is certainly worth auditioning. John Walden

The selling point of VSL's Appassionata Strings (reviewed in SOS May 2007) is the size of its string sections: 20 violins, 14 violas, 12 cellos and 10 double basses, matching the scale of the string orchestras heard on big-budget film soundtracks: 20 unison violins undoubtedly sound lusher than the smaller sections in VSL's Orchestral Strings and Chamber Strings, and you really can't replicate their opulent sound by overdubbing a solo part 19 times!

VSL have now released a second collection, Appassionata Strings II. The majority of its articulations are played con sordino (with mutes attached), and although you might ask whether that justifies a whole new library, the effect is surprisingly radical. The broad, open string sound is transformed into something much softer and somewhat 'fizzier', yet the muted timbre retains a quiet, brooding intensity that has attracted many composers.

Most of the performance styles in the original are replicated here con sordino, including VSL's trademark legato intervals (the sforzando version of which combines a nice, positive attack with flowing note transitions) and versatile 'performance trills', which can be used to create very smooth semitone, tone and major-third trills and grace notes. As ever, the attention to musical detail is impressive; even the, er, idiosyncratic 'detuned attack' performances are included — although it's hard to imagine them eliciting any response other than "Hey! That sounds out of tune."

Straight major and minor arpeggios (played both con sordino and unmuted) are the only new style in ASII. They're supplied in all keys and consist of a fast up-and-down movement over one beat at around 80bpm. The timing is imprecise, but the looped samples are a good resource for creating a kind of orchestral background chordal swirl. As in the original, there are no performance legato samples for the basses. The higher strings' 'harsh' and marcato deliveries are also omitted, but since the purpose of sordino is to soften the sound, it would be almost perverse to play those more aggressive articulations with mutes.

Practically everything stated above also applies to VSL's new Chamber Strings II, which gives you six violins, four violas, three cellos and two basses played con sordino. I often use Chamber Strings to mock up pop string arrangements and was pleased to see its excellent 'Bollywood' slide style replicated here. The companion library provides no new performance styles, and some of the fancier articulations are omitted, but if you need the sound of a muted chamber string orchestra, look no further. These new titles arguably lack applications outside the specialist orchestral market, but if that's your game I can highly recommend both for their musicality and superb sound. Dave Stewart

Upright Bass is a download-only product that runs exclusively on the Vienna Instrument, a unique player specialising in on-the-fly patch changes. In common with other Vienna titles, this was recorded in the Silent Stage, a custom-built facility where a dropped pin is a major breach of the peace and surreptitious farts resound like nuclear explosions. 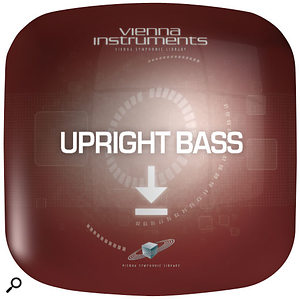 Austrian jazz bassist Bernd Konzett lugged his instrument into this quiet place and performed a 7GB set of mainly pizzicato samples — and he suffered for his art when playing the slides. According to VSL, "the strings heat up to high temperatures, resulting in regular blistering of the fingertips, leaving behind a certain smell of burned and blistered skin." (A case of Bernd flesh?)

The samples are clean and precise with excellent tuning. The upright's sound is big and warm and the three velocity layers used in many of the patches ensure a good dynamic response. Applying their usual forensic approach, VSL sampled the pizzicato parts in damped, muted and 'snap' styles, with three vibrato options and various note lengths, efficiently covering all the musical territory from fast, bebop walking bass-lines to slow, one-note-per-bar jazz ballads. The collection allows for the odd avant-garde excursion, if you want to don that particular beret, and there's also a set of VSL's trademark monophonic legato samples to aid the realism of melodic solo lines.

To activate the finger-singeing slides (glissandi), you hold down a note, then play the target note you want to slide to. One slight problem with the slow 'performance glissandi '' is that the target note sounds loudly at the end of the slide, so you have to lift your finger off the key smartly if you don't want to hear it. I also felt the volume of the normal-speed slides was too low in relation to their starting notes. But, on the plus side, the slides faithfully track intervals of up to an octave, and you can determine exactly when the glissando starts after playing the initial note.

Upright Bass's arco samples are played with a deliberately edgy bowing and no vibrato, an unmelodious delivery intended as an effect. Also provided are ghost notes, 'upbeats' (single notes preceded by one, two or three grace notes) and a variety of note repetitions, so you'll never hear the same two samples in a row. Some of the note-repetition patches feature the raunchy, snarling string buzz you may have noticed in the soundtrack of ITV's soap satire Moving Wallpaper.

All good stuff, although the review wasn't entirely pain-free — I shared some of the bassist's agony in the form of buttock cramp as I waited for the samples to download. But at least the price tag won't leave you with burned fingers. Dave Stewart