This substantial tube mic comes with a generous array of accessories at a good price - but does it sound as impressive as it looks? 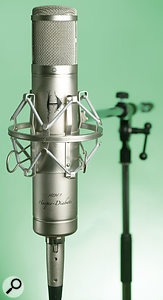 Harper-Diabaté are a small microphone company based in Somerset in England, run by Dan Harper, and their HDV1 is a variable-pattern tube mic that's been priced to appeal to the project studio market. As well as the mic itself, you get a tough plastic flightcase, a shockmount suspension cradle, a foam windshield, a power supply and, of course, the multicore cable that connects the mic to the PSU. Inside the more robust case, the mic comes in a zip-up vinyl pouch that further protects it from scratches and dust.

Cosmetically, the HDV1 looks like a serious piece of work, with its cylindrical form and satin-metal plate finish (I'm less convinced by the company logo, though, which looks a little like a hairy virus!). The mic is also surprisingly heavy — in fact, when they talk in CSI about a 'blunt instrument', I imagine that it would look something like this!

The familiar-looking internal construction of the microphone's metalwork and circuit boards suggests that some or all of this mic was built in one of the large factories in Beijing or Shanghai. The 32mm, dual-diaphragm, gold-sputtered Mylar capsule provides a choice of patterns selectable via a nine-position switch on the power supply box, which also houses the familiar three-pin XLR output to which you connect a standard mic cable to feed the signal to a mixer or mic preamp.

As is usual for a large-diaphragm mic, the capsule is orientated for side address (a cardioid symbol denotes the front of the mic when in cardioid mode), and there's a metal-mesh shield to protect it from physical harm and electrical interference. There's no pad or low-frequency roll-off switch, so operation is simply a matter of selecting the pattern you want (from omni, through various widths of cardioid, to figure-of-eight) and experimenting to set the best mic placement.

As the maximum SPL is rated at 134dB for 0.5 percent distortion, the lack of a pad switch isn't too serious, and you can always use the low-cut switch on your mic preamp if you need to attenuate very low-frequency signals. The shockmount also provides a useful degree of low-frequency isolation and grips the mic firmly, even when it is used in an inverted position.

The quoted sensitivity of 25mV/Pa is typical for this type of mic, and although the 20dB (A-weighted) noise figure isn't particularly low by today's standards, it is perfectly acceptable for a tube mic designed to be used close to the sound source — such as when recording vocals. In fact, even on quieter acoustic instruments, noise isn't really an issue (see my later comments regarding a lute recording).

Replacing the tube, should that ever be necessary, won't be a problem either, as the HDV1 uses the commonly available 12AX7B dual-triode, and its mounting includes a resilient end-support that keeps it firmly in its socket and protects it from shocks. The tube circuit feeds into a balancing output transformer.

It's always advisable to leave a multi-pattern mic like this to stabilise for a minute or so after switching polar patterns, but other than this, operation of the HDV1 was as straightforward as you could hope. As the tube has its own power supply, phantom power isn't needed to run the mic, but at the same time it didn't get upset when global phantom power was applied to the mic inputs.

Setting up this microphone in wide cardioid mode for vocal recordings revealed it to have a useful combination of warmth and presence, and although the sound is by no means neutral, it has a pleasant musicality (although its tonal colour will, of course, suit some voices better than others). Despite the obvious presence bump, the mic didn't capture the fine articulation of plucked stringed instruments as well as a nominally flat-response small-diaphragm mic, but it did produce a pleasing sound when used to record the lute that I mentioned earlier, from around 12 inches (30cm) away. The character of the mic changes slightly as you switch patterns, but the presence peak (or peaks) seems to stay in pretty much the same place.

Being realistic, the performance of this mic isn't dissimilar to that of other affordable tube mics of Chinese provenance — but that is in no way a criticism, because many of these sound pretty good in the right application. It may be worth checking out the competing brands in the same price range (see the 'Alternatives' box above), because all have their own unique character and it's important to pick the one that suits your voice — assuming that you're going to be using it mainly for your own material.

This said, given that the HDV1 has multiple switchable patterns and comes with a neat, comprehensive set of accessories, it certainly offers good value, and it is also capable of producing great results — so if you need a general-purpose tube mic at the affordable end of the price range, this one would be well worth consideration.

As described in the main text, the HDV1 is up against quite a lot of competition. If you're considering purchasing the HDV1 and want to try out some alternatives on your own voice, you could look at models such as the Sontronics Helios and SE Electronics 5600A Mk II. Slightly more expensive, but still worth a look, are the Rode K2, Marshall Electronics' MXL V77s and the AKG Solid Tube.

The HDV1 is a very capable multi-pattern tube mic that's been designed for character rather than accuracy. It can sound very flattering on some vocals but may not suit everyone.