A Guide To Active Pickups 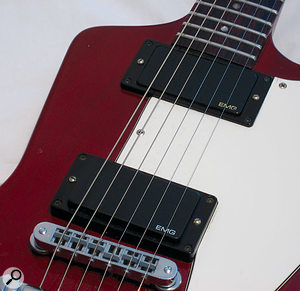 Active pickups, such as the EMG 81 and 85 shown on this guitar, get around the frequency response limitations inherent in passive designs. Whether this is a desirable difference is very much down to taste!The vast majority of electric guitar pickups are of the passive magnetic type, where a coil of wire that's wrapped around a permanent magnet outputs a small electrical signal in response to the magnetic field being disturbed by a vibrating guitar string. Passive pickups have the advantage of needing no power — so there are no batteries in the guitar to fail during performance — and although they have significant technical limitations relating to their frequency response, these limitations have become part of the established electric guitar sound that has been burned into our collective consciousness over the past half a century or more.

In this column a couple of months ago, I described the operating principles of passive guitar pickups, and explained the reasons for these limitations. To quickly recap, to get a higher electrical output you need more turns of wire wrapped around the magnet. This, in turn, increases both the inductance of the coil and the inter-winding capacitance, creating a filtering effect, with both high-cut and mid-band resonant components. More windings also means more susceptibility to induced hum and interference from other electrical devices, which is why the hubucking pickup was first devised.

One of our readers asked if I'd extend my explanation to consider why, if there's such a range of tones available from passive pickups, some people might want to choose active ones. So what is it that active designs achieve, and why do some people swear by them while others seem to dislike them in equal measure?

By using active pickup designs, manufacturers can address some of the issues with passive designs that I described above, by placing an on-board preamplifier very close to the pickup, which may be designed to operate with a lower impedance coil than a guitar amp is designed for.

Any gain that's lost by using fewer turns on the coil winding can be compensated for in the electronics — so it's possible to extend the frequency range of a pickup and to reduce its susceptibility to hum and interference noise, without it needing to be constructed as a humbucker (which, as I've discussed previously, would change its tonality somewhat), while still presenting the amplifier with an adequately high signal. Of course, many traditional players will cite these exact same 'benefits' as the reason they don't like active pickups — they take away some of the character imparted by passive designs that they've grown to love. 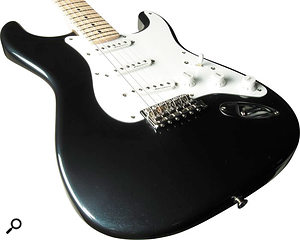 Fender's Eric Clapton Signature Strat may look like a normal strat, but active circuitry inside allows a much stronger mid-boost than on passive designs.There are other benefits to active designs, though. As the output from the pickups is electronically buffered in the preamp, the normal loading effect of passive tone and volume controls, the guitar cable and the input stage of the guitar amplifier is essentially removed, making for a more consistent performance in different setups.

The designers can also build in active tone controls, similar to those you'd find on a mixing console, to provide more scope for tonal tailoring of the signal by the player before it reaches the guitar amplifier. For example, the Eric Clapton signature Strat includes an active mid-range control that can be switched in to provide up to +20dB of mid boost. Some active instruments are based on conventional pickups followed by active electronics for EQ or overdrive effects, whereas others use specially designed pickups and electronics to deliver a specific level of performance. EMG are probably the best-known manufacturer of such active pickup systems, and you'll find plenty of useful information on their web site (www.emginc.com) if you want to learn more about them.

However, there's an obvious disadvantage of active pickups too: they require a power source. This could be a battery placed in the guitar itself or a special power source fed along the guitar cable. While this is fine in factory-built guitars, which are designed to accommodate the power source, fitting active pickups to existing guitars often means modifying the instrument to house the battery, or possibly removing the pick guard in order to reach the battery when it needs changing. And, of course, there's also the risk of a battery failing while playing, so you need to remember to check it before every gig.

Which Is Best For Me?

Ultimately, both active and passive pickups have their own sonic signatures — as, indeed, do different designs of passive pickup — which means that the choice of which to use will always come down to personal preference. If you want the classic sound and don't care about a bit of hum and buzz when you stand too close to your amplifier, then passive pickups may well be right for you, but if you like the idea of more high-end, less induced noise, and far more versatile tone controls, perhaps you should investigate active pickup systems further. Paul White

Softube's Metal Amp Room plug-in comes from the same stable as Vintage Amp Room and it follows the same philosophy: there are no effects or pedals, but you get very accurate modelling of real amps in real rooms. As the name suggests, Metal Amp Room is designed to provide heavy-rock sounds, and its tonal range extends from scooped Brit Stack tones to US shred. Apparently this native plug-in (which is available in VST, RTAS and AU formats for $179 from the Softube web site, and is licensed via iLok) was co-developed with Patrik Jensen of The Haunted, and some of his tonal proclivities have clearly rubbed off. The continuous mic-placement idea used in Vintage Amp Room is retained, but this time you have two mics with adjustable balance and stereo panning. 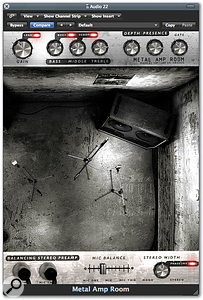 Softube's Metal Amp Room plug-in includes only two amp and cab models but gives you access to a very convincing sonic palette.Flexible though this plug-in is, there's not that much to driving it, as you simply choose from one of two amp channels and one of the two cabinets, then balance the two mics per cabinet and you're off. High-gain sounds tend to mean high noise, so there's a built-in noise gate with a programme-dependent release time, and this works exceptionally well without strangling your sound.

The plug-in window (right) looks like the plan view of a third-world prison cell with a pair of speaker cabs in its corners. You just drag whichever you wish to use into full view. At the top of the window you'll find the usual gain, bass middle and treble knobs, with extra knobs for depth and presence. A red button next to the Gain control lets you select normal or lead mode, and there are further buttons to select 'Deep' and 'Scoop' tonalities. Gain has more than enough overdrive potential to take you into serious shred territory, and the noise gate really helps clean things up here. Scoop gets you close to those familiar Marshall-stack tones, where cranking in some depth gives you the requisite punch. A DJ-style slider balances the two mics, which can be repositioned by dragging, and when used in stereo you can adjust the stereo width and phase-invert one of the mics, should you wish.

Although there are only two cabinets, the range of sounds that you can get from changing the mic setup and tweaking the controls is surprisingly wide, and unlike many of the amp modelling plug-ins currently available, this one really manages to convey a sense of power and weight.

If you're trying to recreate the metal genre at a domestically friendly level or simply overdubbing solos onto existing recordings, Metal Amp Room has much to commend it. What's more, you can use all your usual pedals in front of it, as long as you ensure you don't overdrive the input to your audio interface. However, you shouldn't expect it to play polite blues when you turn down the gain, because it really isn't that kind of animal — it's the kind that growls best with everything set well past 11! Paul White

As with Vintage Amp Room, you get the sound of real amps in a real room, warts and all. Softube excel at this, but it's down to you to add any effects and processing — just as it would be when working with a real amp in the studio. 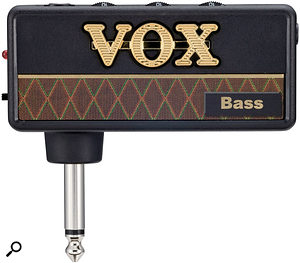 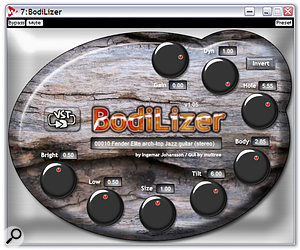 Vox have added two new models to their natty little Amplug range of guitar headphone amps that we reviewed back in SOS January 2008. They say that the first model — the Amplug Lead — is based on a US-made high-gain boutique amp that's been modified for use with lead guitar. As well as the amp and speaker sound, you get a digital delay effect, "to give you a huge, spatial sound that could not be previously obtained".

The other model is the Amplug Bass, which is the first one developed specifically with bassists in mind. It is modelled largely on VOX's classic AC100 bass amp, but has also been tweaked to give the user access to more modern sounds too. There's a compressor/boost effect included, which Vox say also gives a thick overdrive sound, as well as a high-quality FET buffer circuit that's used to extend the device's dynamic range. Costing the same as the earlier Amplug models (£35 each), they look to be ideal Christmas stocking fillers... or, dare we suggest, an inexpensive hint to your guitarist or bassist to keep the noise down!

If you can cast your mind back to SOS June 2008, you may remember Bob Thomas' review of IJData 's inexpensive Bodilizer acoustic imaging plug-in. Essentially, this inexpensive plug-in processes the DI'd signal from an acoustic stringed instrument that's fitted with a piezo pickup and makes it sound much more like an instrument that has been miked. Despite giving it a hearty thumbs-up, Bob thought it could be much improved if users had the ability to capture 'images' of their own acoustic instruments and load those into the plug-in, so that they could get the sound of their own guitars, having played parts in via DI. Well, now they can, because developer Ingemaar Johansson has released a utility that allows any Bodilizer users to do exactly that. Even better news is that it is available at no extra cost — although, of course, you need Bodilizer to make use of it.