These monitors may look like their more expensive siblings, but do they also share the family sound? 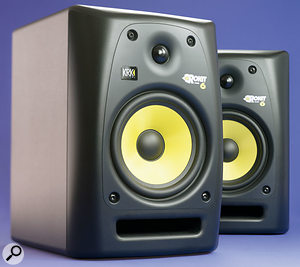 The RP — or 'Rokit Powered' — G2 range is a new line of active monitors from manufacturers KRK that builds on the success of the previous Rokit designs. The RP G2 series comprises three monitor models (the RP5, RP6 and RP8 G2), all of which share the same design philosophy, and there's a subwoofer available too. With their heavily profiled front baffle, slotted port and radiused corners (which help reduce cabinet-edge diffraction as well as looking rather cool), these monitors are unmistakably KRKs — even before you notice the signature yellow, woven-glass, Aramid composite woofer-cone and light-up KRK logo. However, the monitors may cost a little less than you'd expect from this manufacturer, because, although they're designed by KRK, they're built in China, where labour costs remain relatively low.

For this review I've focused on the RP6s, but KRK tend to build speakers with a sensibly consistent family sound across each product range. You can thus expect the larger RP8s to reproduce lower frequencies more effectively, and their overall maximum SPL to be a little higher, but the general tonal balance to be much the same. For desktop use in a small space, the RP5s would probably be the best choice from the range.

Overall, the RP6's cabinets measure 321 x 225 x 266mm and weigh 11kg each. The cabinet design appears to be a fairly conventional front-ported MDF box, with the sculpted baffle fixed to the front, and recessed into this is a further baffle plate that holds the two drivers. Being active, the drivers are electronically crossed over and bi-amped, with an overall amplifier power of 68W (50W woofer and 18W tweeter) and a fourth-order crossover operating at 2.6kHz. This arrangement yields an overall frequency response of 49Hz to 20kHz ±1.5dB, with a maximum SPL per pair of 107dB at one metre.

A one-inch Neodymium soft-dome tweeter with ferrofluid cooling handles the high frequencies, and this is recessed into a shallow waveguide moulded into the baffle. Both drivers are magnetically shielded, so these speakers can safely be used close to CRT monitor screens.

A metal backplate doubles as the rear panel and the amplifier heatsink, and it is on this rear panel that you find all the necessary connections and controls. You can adjust input sensitivity by means of a rotary that offers a -30dB to +6dB adjustment range, and a further rotary switch is used to select the HF characteristics above 2kHz, with options of +1dB, Flat, -1dB ,or -2dB shelving available. I left this set to flat for my tests, but alternative settings may be used to adjust for room characteristics or personal preference.

As well as the expected balanced XLR audio input, you also have both RCA phono and quarter-inch TRS balanced jack connections. There's a power on/off switch on the rear panel, next to the IEC mains inlet, and after power has been applied for a second or two a relay clicks on and the speakers become active (the delay avoids annoying power-on thumps). Thermal protection is built into the amplifiers, so if they're abused for long enough, they'll shut down until a safe operating temperature has been restored.

These RP G2-series monitors turn in a very decent performance and — just as importantly — don't display any obvious vices that attract your attention. Although you'll never get floor-pumping bass out of a six-inch monitor, the Rokit 6 G2 produces a very credible bass sound at normal listening levels, coupled with a detailed mid-range and smooth highs. The sense of fine detail isn't as enhanced as with KRK's more sophisticated (and correspondingly more expensive) monitors, but it certainly isn't anything to be ashamed of — especially when you look around and see how much you can pick up a pair of these monitors for 'on the street'. The stereo imaging is similarly more than adequate, and the phantom centre image is stable. The Rokit Powered 6 G2s produce a tighter bass end when they are set up on a solid mounting surface, so for the test session I placed them on my Radial Primacoustic damping platforms: these benefit any small shelf-mounted monitors, helping to eliminate the stability of the shelf from the variables involved in a subjective speaker test.

Perhaps the best accolade I can give these monitors is that, after working with them for a few minutes, I just forgot about them and got on with my studio session — which is a very good sign. Monitors with problems, or those that are designed with excessive coloration, usually keep attracting your attention, making you wonder if what you're hearing is really the way your mix sounds, but there were certainly no such distractions here.

Obviously, the KRK RP6 G2s have been built to a price, and you'd be able to purchase more accurate monitors if you spent enough money. But if you're looking to invest in a pair of tonally well-balanced speakers that will get the job done for around the £300 mark 'on the street', there are very few models I'd actively recommend — and the RP6 G2 would certainly be one.

If you're looking for alternatives in this price range, you could investigate the Fostex PM Series, the Tannoy Reveals, the Samson Rubicons and the Alesis Monitor 1A MkIIs.

A very capable pair of small powered monitors that are suitable for project studio use. They're ideal for the user who can afford a little more than the price of an entry-level speaker but who still demands good value for money.