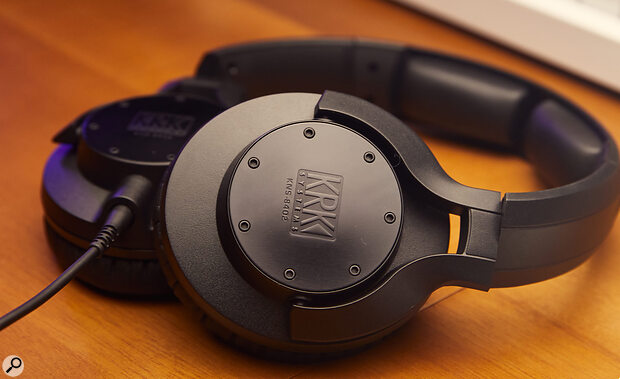 KRK’s studio monitors are a familiar sight, with their distinctive woven yellow cones, but their new KNS 8402 closed‑back headphones have a much more sober look. These are circumaural, which means they are designed to fit around the average ear rather than on it. Designed in California and made in Taiwan, the KNS 8402s employ 40mm‑diameter neodymium drivers. The 2.5m connecting cable is made using 99.99% oxygen‑free copper wire, and to ensure a long life, parts such as the cable and the head and ear cushions are replaceable. A soft carrying case is included for storage when not in use.

The frequency response is quoted as ranging from 5Hz to 23kHz, and the distortion specified at less than 0.1% (which is much better than most loudspeaker systems manage!). The impedance of the phones is 36Ω and the maximum power handling is half a Watt per phone.

One important factor not always discussed when talking about headphones is their degree of acoustic isolation from the outside world. The KNS 8402 is said to provide up to 30dBA of isolation. This not only helps reduce headphone bleed into the microphones when recording, but it also means you can monitor at lower levels without being distracted by external sounds such as other instruments. Though the phones are capable of a maximum SPL of 124dB (calculated), which should ensure that peaks come across cleanly, it is prudent to monitor at sensible levels so as to avoid hearing damage.

Impact‑resistant plastic is used for much of the construction to keep the weight down, and I’m pleased to see that the driver protection uses a fine mesh rather than those thin foam pads that invariably turn to dust after a few years of use. Padded cushions inside the top of the headband, incorporating memory foam, make the phones comfortable to wear for long periods, and the headband is adjustable with up to 90 degrees of rotation for the ear cups. Weight without the cable attached is just 247g, so they’re not too heavy either. The cable is removable courtesy of a locking mini‑jack at the headphone end, and there’s a mini‑jack with a screw‑on quarter‑inch jack adaptor at the other. For consumer use, there’s a separate, short extension cable included with an integral volume control and fitted with a 3.5mm TRS jack.

The design ideal for studio headphones is much the same as for monitor speakers: a wide, flat response, low distortion and minimal phase errors. While headphones don’t interpret stereo material in the same way as speakers due to the high degree of separation between the left and right channels, they remove room acoustics from the equation and so are particularly useful when working in imperfect rooms. It is also the case that many people now rely almost entirely on earphones or earbuds for music listening, so getting a mix to work on headphones is essential.

Closed‑backed phones such as these are ideal for tracking due to their good isolation, and although most people gravitate towards open‑backed phones for mixing work, there’s no reason why those who can only budget for one set of headphones shouldn’t use a close‑backed set for this purpose too, as long as it has been designed with care.

These phones provided a smooth, detailed listening experience with good separation between instruments...

In the case of headphones the law of diminishing returns definitely applies. There are plenty of capable headphones at around the £$100 mark, but to see a significant further improvement, you could spend thousands. As they are priced very close to that £$100 figure, one should expect good performance from the KNS 8402, and indeed you get it. Most importantly, these phones provided a smooth, detailed listening experience with good separation between instruments, but at the same time, if you feed them a mix that is unduly aggressive they will let you know.

As with most closed‑back headphones, I get the sense that the bass end is marginally more inflated than it would be with an open‑backed design, but no more so than with any other closed phones I’ve tried in the sub‑£$200 bracket.

The degree of isolation from the outside world is indeed good, and because these phones sit around the ear rather than on it, the low end stays consistent without you having to fiddle about with positioning the earcups. I also found them comfortable to wear for reasonably long periods. Esoteric they may not be, but for most of us living in the real home studio world, they do a perfectly good job and will outperform most affordable speakers in a typical home studio environment.

An affordable set of headphones that displays a good sense of clarity and separation, while also offering a very useful amount of isolation.