KRK’s established V-series monitors have long been popular in the project studio, and now they’ve been given a major overhaul.

KRK’s V6 Series 4 studio monitors are so new that when they first arrived at our office there was no technical info and no mention of them online, so I had plenty of time to get used to them before I started writing. (Fortunately a preliminary technical spec became available a few days later.) The V6s are part of a three-speaker range comprising the V4, V6 and V8 models. According to the rear panel, the speakers are designed in the US by KRK (now a subsidiary of Gibson), but they’re built in China. 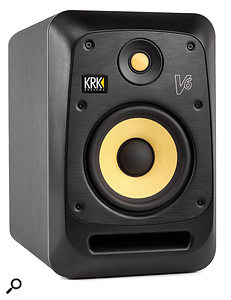 Based around a 6.5-inch main driver and a one-inch tweeter, the speakers measure 231 x 353 x 288 mm, weigh 9.4kg each and have a non-slip EVA rubber pad bonded to the base. Threaded universal mounting points are also fitted. Looking like a stylish evolution of the current Rokit 6, the V6 Series 4 adopts a slightly more rounded baffle shape and generously rounded cabinet corners with a stylish silver trim between the baffle and the main casework. However, the most obvious visual difference is the soft-dome tweeter, which now sports a yellow woven-Kevlar diaphragm that matches the Kevlar cone of the main driver. Unusually for a studio monitor, powder-coated, perforated-metal grilles are included with the speakers to provide driver protection in mobile use.

The woofer is built using an aluminium basket and is powered by a ferrite magnet, as is the tweeter. At the bottom of the baffle is a slot-shaped port and, as before, a KRK logo lights up to show you the speakers are powered up. A black anodised baffle front is secured in place, and six cap-head screws allow for fixing the included grilles. The baffle is curved in towards the edge of the main driver to provide a smooth transition, and the tweeter sits in a shallow dish to help control its dispersion.

On the steel rear panel is a balanced XLR/jack combi input, an IEC power inlet with integral switch, and a set of controls to allow the speaker voicing to be adjusted to take account of room placement and user preferences. These comprise three seven-step rotary switches with screwdriver slots, and five DIP switches for the system settings, comprising ground lift, -10dBV/+4dBu sensitivity, standby on/off, logo light on/off and logo-light bright or dim.

Input attenuation can be adjusted in 0.5dB steps from 0 to -3 dB using the first rotary switch, while the other two address the high and low filter options. The low filter covers -3 to +3 dB at 60Hz, plus a few options that also include a 2dB cut at 200Hz, while the HF filter offers a range of HF shelving and 3.5kHz peaking options covering a -2 to +2 dB range. That totals 14 user-selectable EQ options offering 49 permutations to compensate for room acoustics, placement relative to boundaries (including desktops) and user preference.

Power comes from twin Class-D amplifiers — 125 Watts for the woofer and 30 Watts for the tweeter — and the crossover operates at 1.6kHz. A frequency response of 49Hz to 19kHz is specified between the -3dB points, with the level being down by 10dB at 40Hz and 24kHz. SPLs of up to 115dB can be generated, which is very loud for a monitor that is likely to be used at close range! If no signal is received for 30 minutes, the speakers enter standby mode to save power unless the standby function is switched off.

So far so good, but what do these new speakers actually sound like? The first thing that struck me was their very pronounced stereo imaging, making it very easy to place elements across the soundstage. There’s also a plausible sense of depth as well as width — maybe not so much as from a really high-end speaker but impressive nonetheless. The bass end comes over as tight and well focussed, given that the cabinet is ported, while the sense of detail in the upper mid-range is also worthy of comment.

With the controls set to flat, the delivery was a hint forward-sounding for my own taste but the highs still didn’t come over as being excessively splashy, so those new Kevlar tweeters seem to be doing their job. Tonally I’d say the top end is not a million miles away from what you might expect from a ‘folded ribbon’ type of tweeter. Fortunately, there’s enough EQ range to tame the highs if you prefer less presence, and having so many options, particularly the 3.5kHz dip setting, makes it easier to get the sound balance you want with the speakers on a desk or shelf.

The inbuilt non-slip bases don’t provide a great deal of vibration isolation, so you’ll notice the difference in imaging and tightness if you put the speakers on something like IsoAcoustic platforms rather than straight onto a shelf or desk, and it is worth taking the time to experiment with those EQ settings once you have the speakers set up. After that you need to spend some time listening to commercial recordings to help calibrate your ears.

Ultimately, KRK build loudspeakers that the project studio operator can afford, so inevitably there are some compromises, but in the V6 Series 4, the designers have come up with a speaker that performs strongly within its price bracket and one that I’d be very happy to mix on. They deliver a clean and detailed sound with a strong sense of focus, they make good mixes sound good, and if there are any problems with, they’ll let you know. Those included grilles are a good idea too if you often do mobile work — or if you have kids who like to poke in tweeters.

Similar-sized alternatives include various six- and seven-inch models from companies such as Adam, Fostex, PreSonus, Eve and Mackie.

This new model is a step up from the previous version and, given its price, is a good fit for use in a small- to medium-sized project studio.