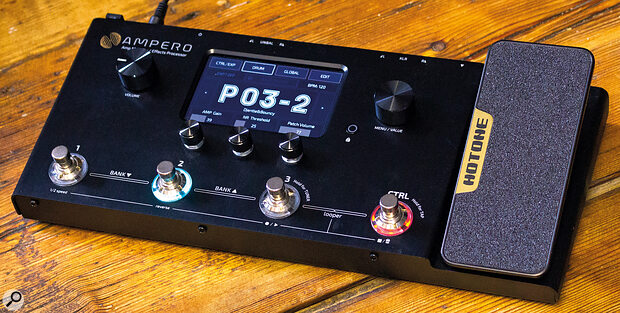 Hotone believe you shouldn’t have to tweak a million virtual components to find a great guitar tone...

Chinese company Hotone (pronounced Hot‑tone, by the way) have quietly built a good reputation for building compact hardware amplifier, loudspeaker and effects modellers over the last few years, and their headline multi‑effect range currently includes two units: the Ampero One and its larger sibling, called the Ampero. The latter, which is the subject of this review, arrives in black‑and‑gold packaging that wouldn’t look out of place in a high‑end fashion emporium! Its surprisingly slim, all‑metal, black chassis features a four‑inch colour touchscreen, five black knobs (volume and four touchscreen‑related encoders), four backlit chrome momentary footswitches, an integrated volume/expression pedal, white lettering and, naturally, gold logos. All of this is contained in a footprint just a shade longer and about a third narrower than a print copy of SOS.

The Ampero’s I/O reside on its gold‑painted rear panel. One of two neighbouring quarter‑inch jack sockets is for the mono instrument input, and this has three switchable impedances that cover electric guitars, piezo‑equipped acoustic instruments and keyboards. The other caters for an external expression pedal. You’ll also find a MIDI In DIN socket, a stereo mini‑jack Aux input, and a USB 2 Type‑B connector for connecting the Ampero to a computer for use as an audio interface and/or for programming presets.

The main stereo outputs comprise a pair of balanced XLR connectors and another of unbalanced quarter‑inch jack sockets; the latter automatically switch to mono when only their left outputs are connected. There’s also a mini‑jack headphone output. Power is supplied by an external 18V DC 500ma power supply, with on/off and ground‑lift switches.

Among the profusion of I/O, you’ll find both balanced (XLR) and unbalanced (jack) outputs, while the input caters for instruments with regular or acoustic pickups, as well as line‑level signals.

The Ampero’s software runs on a dual‑DSP platform made up of a fourth‑generation Analog Devices SHARC chip and an NXP RT co‑processor running on the ARM Cortex‑M7 core. The SHARC handles audio DSP (Digital Signal Processing) with the assistance of the co‑processor, which also takes care of the touchscreen display, USB I/O, and other housekeeping functions.

Hotone Audio’s approach to modelling centres around two proprietary systems, which they call CDCM HD (Comprehensive Dynamic Circuit Modelling High Definition) and FIRE (Field Impulse Response Enhancement). Essentially, then, it combines convolution technology with algorithmic modelling, but Hotone say that it does so in a way that is unique: they claim that the CDCM HD side of the equation is capable of adjusting the parameters of a model dynamically in real time, which means it can reproduce accurately the non‑linearities of real equipment without being overly computationally intensive. Should you be interested in discovering more about the internal workings of CDCM HD, Hotone have published a white paper on the subject at https://bit.ly/3u4rOWU.

Being based on a ‘black box’ approach to modelling (ie. one based on devices’ output signals, rather than the detail workings of their circuitry), the Ampero does not support deep‑dive, component‑level editing. Rather, its hardware controls and editor software are designed to provide users with the same sort of control that they’d find on the amp/cab combinations being emulated. The Ampero hardware offers slightly more global setup options than its editor, whilst the latter has sole control over MIDI CC assignment and patch import/export functions.

The Ampero operates under the paradigm of patch‑based presets, and offers 99 F‑prefixed factory patches in 33 banks of 3, and a similarly configured 99 P‑prefixed user patches; changes to the factory patches can be saved only as a user preset. Patches can be recalled instantaneously using footswitches 1‑3 to switch banks and select patches, or by moving backwards and forwards sequentially through all patches via the touchscreen and/or Menu/Edit encoder. There is also the option to pre‑select the next patch and then to load it via a second press of the relevant footswitch.

Internally, each patch consists of a serial chain of nine modules, each of which can be switched on/off individually and also freely positioned within that chain. The contents of the Amp, Cab, NR, EQ, Delay and Reverb modules are self‑explanatory, but FX1, FX2 and FX3 have a more complex relationship. FX1 and FX2 are loaded from different but partly overlapping selections of 76 overdrive and effects pedals. FX3 has another, more restricted, selection of 36 pedals, which again overlaps in places with the other two. Given the ability to place any of the effect modules anywhere in the signal chain, these overlaps offer a high degree of flexibility when it comes to building overdrive and effects combinations.

Once I’d become conversant with the operation of the Ampero’s patch editing, and I had got my head around the layouts of the various associated touchscreen displays, I found the whole process pretty intuitive. My speed of execution increased considerably, though, when I started using the touchscreen and the large Menu/Edit encoder, along with the three smaller encoders which are used to tweak the parameters of whatever patch, effect, EQ, amp, cab or mic model you currently have selected on the screen. 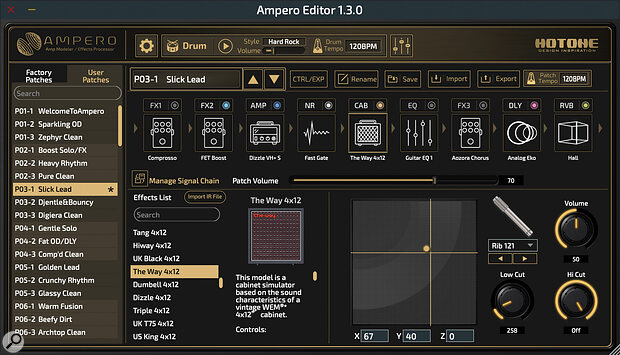 The Ampero Editor app, which runs on Mac or Windows machines and communicates with the Ampero hardware over a USB connection.

Adding the Ampero software editor into the equation enhanced my performance even further, which is just as well given that there are 242 models (including models of 23 overdrive pedals, 80 FX pedals, 64 amplifiers) plus 80 cab IRs (including 20 user IR slots) to choose from.

The two expression pedals, EXP 1 (integral) and EXP 2 (external) can each be programmed to control one parameter on up to four of the nine modules, the controllable parameters being determined by the content of each individual module. In addition, the three small encoders can be set up as quick‑access knobs to three parameters from within the modules in a patch

The onboard, 100‑pattern, sampled drum machine can also be configured for each individual patch. Pattern choice and tempo setting are stored with every patch, and there’s also the option to lock the playback tempo to the tap tempo. The Ampero also features a simple looper, with reverse and half‑speed options, that can be placed either pre or post the effects; pre‑effect placement gives a mono loop of 100 seconds, and post‑effect is capable of a 50‑second stereo loop.

As luck would have it, I’d no sooner fired up the review Ampero than updates for both the unit’s firmware and its editor appeared, the download and installation of which went without a hitch on my iMac. The Ampero is plug and play with both Mac OS and Windows 10, although earlier versions of Windows require the installation of the Hotone ASIO driver. With both updates in place I set the Ampero up as an audio interface with Reaper, again without any installation issues.

I then worked my way through the Ampero’s factory patches and their individual emulations of effect pedals, amplifiers, speaker cabinets, delays and reverbs, through both my studio monitors and a couple of active PA cabs. The majority of the Ampero’s factory presets are distortion‑heavy, effects‑laden and instantly attractive, if you like that sort of thing. However, dial back the distortion or switch to cleaner patches and you’ll find that there’s a lot to like about the Ampero’s emulations and the way that it responds to picking dynamics. I can’t claim to be familiar with every one of the pedals, amps, cabs, delays and reverbs that are modelled in the Ampero but for the many that I do know, the Ampero succeeds in reproducing the essence of their individual characteristics.

Dial back the distortion and you’ll find that there’s a lot to like about the Ampero’s emulations and the way that it responds to picking dynamics.

Most importantly, though, I had a lot of fun using the Ampero: it sounds relatively convincing and I really enjoyed playing through it. Patch navigation and parameter editing quickly became second nature, and I soon realised that working between the Ampero’s touchscreen, editor program and hardware controls was the way to go when building my own user presets.

A pleasant surprise was the acoustic modelling. Not only are there plenty of good‑sounding acoustic guitar models for use with pickup‑equipped acoustic guitars (the piezo input impedance setting was a help with these), but there’s also a choice of several acoustic guitar simulations developed specifically for use with Strat (single‑coil) and Les Paul (humbuckers) guitars.

Although I didn’t come across any software or firmware problems, I experienced a couple of practical issues with the Ampero’s integral EXP1 volume/expression pedal. Its status LED is completely hidden from view unless the treadle is all the way up, and switching it is impossible when the Ampero is used on a desktop — I couldn’t apply enough pressure to activate its electronic switch. On a carpeted floor, I had to use my full weight to switch the EXP1 pedal reliably, though on a hard floor (ie. like a typical stage) I didn’t have any problems whatsoever.

Overall, then, Hotone Audio’s Ampero is a very capable unit that’s available at an attractive price, and it’s made all the more attractive by the sheer number of modelled effects, amplifiers and cabinets that have been packed into such a small box. It feels enjoyable to play through, it is intuitive and simple to operate, and its models sound good, while delivering convincing emulations of the essential characteristics of the original units with which I’m familiar.

Many guitarists will see instantly the attraction of the preset‑based system Hotone have adopted. If, like me, you’re an obsessive tweaker of things like bypass capacitor values in tube amp models, I suppose you could sometimes find yourself pining for more control, but I actually found the experience liberating: in preventing me from disappearing down the tweaking rabbit hole, all I could do was turn it on, adjust the gain, tone, volume and effects to taste, play my guitar — and enjoy myself!

So if you’re recording at home and/or you want an amp and effects modeller that is simple to operate and that doesn’t require knowledge of the inner workings of tube amps and effects to get the best out of it, the Ampero could well suit your needs perfectly.

You’ll find similar, though not identical, offerings from the likes of Boss, Line 6, Mooer and Zoom at around the Ampero’s price, and while they all offer different pros and cons, the Ampero can hold its head high in this company.

The Hotone Ampero is a compact and highly capable amplifier and multi‑effects modelling pedalboard that crams a high level of functionality and a wide range of emulations into its diminutive form‑factor.