This new download library from celebrated electronic sound designer Ian Boddy is one of his new Waveforms series, and features about 100 24‑bit audio loops of between 10 and 50 seconds in length, weighing in at 550MB of content in total. All the loops come courtesy of the exotic‑sounding Yaesu FT757GX HF and FT757AT, but before any analogue‑synth completists break out in a cold sweat, these aren't obscure keyboards — they're the two parts of a high‑quality radio transceiver which Boddy and his mate Paul Stokes have tuned and mangled to create a series of evolving soundscapes. 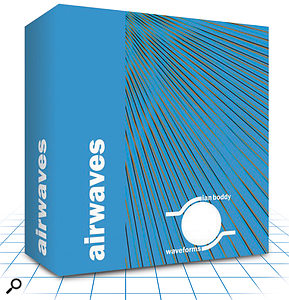 Given the provenance of the audio and Boddy's penchant for the unorthodox, it should come as no surprise that many of the sounds feel as if they might just as well have emerged from some kind of hallucinating droid or the abandoned communications console of a space‑age Marie Celeste. Distorted interference signals wash in and out of various flavours of radio hash, while drifting side‑bands, hints of spoken announcements, and smatterings of Morse code briefly approach the surface before being sucked back in. Perhaps it's because these kinds of sounds have so often accompanied scenes of technological isolation that such a strong mood of detachment and even despair prevails most of the time, although not without the odd moment of illumination in the form of purer, higher‑register tonal drones suggestive of contemplative higher alien life forms at a distance.

So maybe not the first choice for the next Girls Aloud single, or indeed anything else destined for a forthcoming Now! compilation, but at the same time very evocative in the right circumstances — darker emo or electronica, perhaps, or retro sci‑fi soundtrack work. What's more, I can't immediately think of anywhere else you could easily lay hands on such a range of this kind of material, short of tweaking your own Yaesu (which sounds uncomfortable), so I reckon Airwaves has got to be considered good value in its field. Kontakt 2 patches are provided too, which will simplify mapping and triggering the samples for some users — you get each sample mapped across the whole keyboard with pitch‑shifts, as well as 'menu' patches with all the loops within each of the product's five notionally themed folders laid out alongside each other. However, I did feel that there was a lot happening later on in many of these loops which could have been edited out into a series of shorter one‑shots for improved usability.

If you like what you hear in Airwaves, then check out Ian Boddy's other Waveforms titles, which include Drumalogue, a 1000‑strong drum one‑shots library designed from scratch using analogue synths rather than drum machines, and Radiophonica, a personal tribute to the heyday of the BBC's Radiophonic Workshop. Mike Senior