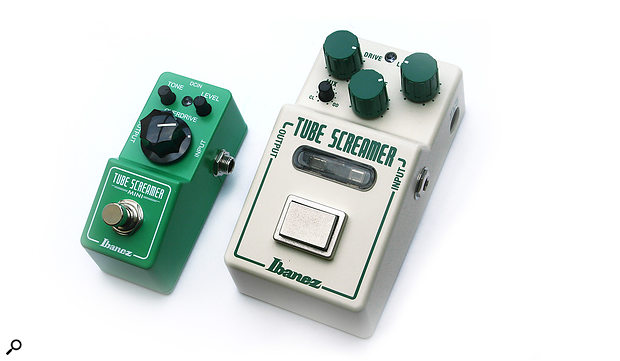 The Tube Screamer has a strong claim to being the most famous overdrive pedal ever made. Tube Screamers — in all their different varieties — add a moderate amount of drive that can be used to ‘push’ the front end of an amp or to create a rock/blues-style overdrive when plugged into a clean amp (whether real or virtual), and a mid-range hump stops things becoming too messy at the low end; players’ opinions tend to be divided as to whether this is a good thing, but it’s certainly an integral part of the classic Tube Screamer sound. Predictably enough, lots of players harp on about how good the old models were, but new variants are always worth checking out, and reviewed here are two brand new models from Ibanez, the Tube Screamer Mini and the Nu Tube Screamer.

The Tube Screamer Mini forgoes battery operation in order to fit everything into the popular compact pedal format. Use of some surface-mount components means everything can fit in the tiny case, but Ibanez say the circuitry and JRC4558 op-amp chip conform to the original spec. The manual doesn’t tell us if the pedal is true bypass or not, but, as it passes signal in bypass mode with the power disconnected, it appears to be wired rather than buffered — and the same goes for the Nu Tube Screamer.

While the controls have the same functions as the original, the tone and level knobs are inevitably smaller, with only the main overdrive knob being full-sized. As expected, the tone control removes high end when turned anticlockwise from centre, and adds top end when turned clockwise. The pedal sounds pretty much as expected, capturing the classic sound with minimal background noise. Purists may still prefer the ‘made like they used to’ models with JRC4558 chips transported from the 1980s using a time machine, but the Mini is a workmanlike, good-sounding pedal that delivers what you expect from a classic Tube Screamer and doesn’t require you to sacrifice much space on your pedalboard.

If you’re not a stickler for the traditional Tube Screamer sound, the Nu Tube Screamer may well become your new best friend, and unlike the Mini it can run from batteries as well as a 9V PSU. The Nu refers to one of those tiny, flat-format valves made popular by Vox and Korg in recent years. Nutubes were developed by Noritarke Itron Corp and are based on fluorescent display technology. They use much less power than a conventional triode valve (around two percent), but it is claimed they can generate the same musical overtones, and they have a working life expectancy of some 30,000 hours. In this design the valve is used in place of clipping diodes to produce a more amp-like overdrive.

The controls are the same as for the regular Tube Screamer but with the addition of a Mix control. After the discrete input amplifier, the signal splits in two, one path going direct to the Mix control and the other via the Nutube overdrive stage. When mixed with the overdriven tube sound, the direct path adds an amp-like attack and focus to the notes that is actually very musical and nicely responsive to picking dynamics. If you’re after a blues or classic rock sound, this pedal is ideal, and in many ways it has a more ‘grown up’ sound than the classic Tube Screamer. It doesn’t ‘dirty up’ enough for hard rock, but that’s never been what Tube Screamers do — it does blues, it does raunch, and it loves power chords. The more I played through it the more I liked it; the Nutube circuit does indeed bring something of a boutique and very musical character to these Tube Screamers, which I’m happy to recommend.