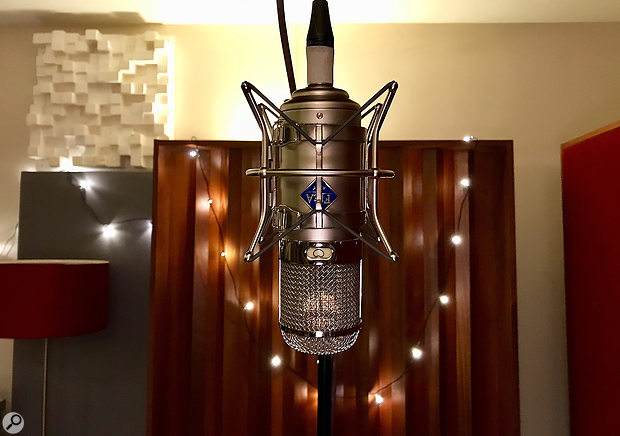 Flea Microphones were founded in 2002 in Slovakia. Initially they produced exact clones of revered vintage (and, at the time, not so often copied) Neumann and AKG microphones — namely the Neumann U47, U48, M49 and M50, and the AKG C12. Alongside this Flea Vintage series they developed Flea Next, a range in which they put a slight twist on the U47 and M49. The U47 Next is a fixed‑cardioid version rather than cardioid/omni, and the M49 differs from the stubby‑looking original in being housed in a long slender case which is rounded off by the connector. The latest additions to this range are the SuperFET 47 and 48 microphones, in which they set out to achieve sound qualities as similar as possible to the valve U47, but with the benefits of FET technology, ie. better signal‑to‑noise ratio, lower production costs and better reliability.

In the 1960s, as silicon transistor technology rapidly developed, microphone manufacturers began to incorporate this technology into new designs, realising that they could produce high‑definition microphones at a lower cost than the valve equivalents. The Field Effect Transistor (FET) had been perfected and gave birth to a generation of solid‑state microphones. Neumann began to pour money into research and design to produce a FET range of mics. The first was the KM84, released in 1966, and this was followed by other classics like the U87 and the U47 FET, released in 1972. Solid‑state technology still dominates capacitor microphone design, but the original Neumann U47 FET has become a titan among studio mics, with a price tag to match. Neumann began to remanufacture the mic in 2015 and it will set you back over £$3000. The Flea SuperFET 47 and 48 both retail at around $2195£1800, so they already present quite a saving. Let’s dive in and see if they can stand up to Neumann’s legacy.

Flea pride themselves on using high‑quality components and point‑to‑point wiring in their hand‑assembled microphones. The Flea F7 capsule is employed across much of their range and is their replica of the renowned Gefell M7. It is even skinned by renowned German manufacturer (and ex‑Gefell employee) Siegfried Thiersch. All of this attention to detail bodes well and gives the microphones an air of quality.

The microphones come in a large, branded cardboard box that reveals a nice wooden box containing the microphone, plus a compartment for the cradle. The cradle seems solid, and uses an elasticated suspension within a metal frame. I have found that once these types of cradle age a little they can get slightly bent out of shape, meaning you are permanently refitting the elastic when it pops out of the frame. That said, this seemed well constructed, with small eyelets to hold the elastic to the cradle. I also really like the latch‑style clips that tighten and loosen the cradle grip. The microphones themselves look elegant and have a good‑quality, sturdy feel to them. The 47 and 48 are outwardly identical apart from the capsule basket frame, which has a chromed look on the 47 and a brushed matte finish on the 48. The SuperFET 47 and 48 are essentially the same cardioid microphone, but with different secondary polar‑pattern options: omni and figure‑8, respectively. 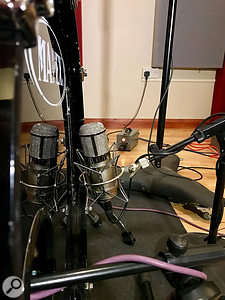 As soon as you mention the words ‘FET 47’, most engineers will talk about using them on kick drums and bass guitar cabs, so this seemed like a great place to start.

At Half‑Ton Studios, after a random encounter with an old Audio‑Technica ATM25, we convinced the owner to sell it to us, and that has been my go‑to inside kick microphone for many years now. On the other hand, I have tried many mics in front of the resonant head, including our ’70s Neumann U87, Earthworks SR25, Beyerdynamic Opus 65, and AKG D112. All achieved different results; from the crisp mids of the U87, to the open and flat response of the SR25, the scooped mid‑range of the Opus 65 and the exaggerated lows and highs of the D112. However, each mic also seemed to need to be massaged into giving me what I wanted — namely, a decent amount of sub and added weight to the main inside kick microphone.

I was very keen to try the Flea SuperFET 47 on the resonant kick‑drum head and I’m happy to say that it didn’t disappoint. Firstly, I noted that the mic could handle the high SPLs encountered in this role — the electronics inside many capacitor microphones will overload and distort when they’re placed in front of kicks. Both the SuperFET 47 and 48 boast an impressive 137dB maximum SPL for a THD of 0.5 percent. The 47 added a significant amount of sub‑bass to the kick drum from around 100Hz down, nicely enveloping the kick drum sound and giving a useful amount of weight whilst not making it too boomy. 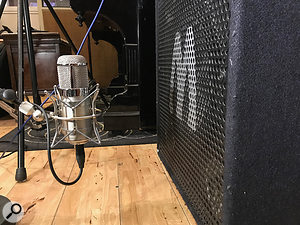 Neumann U47 FETs have long been popular on kick drums and bass cabs, in which roles the Flea mics acquitted themselves admirably.I tend to mic bass cabinets at about six or seven inches from the grille. I find that this area tends to give the most balanced frequency response (although I also always wear my attenuating earplugs and listen in front of the cab whilst the bassist plays to fine‑tune the positioning). On this session we were using a Peavey T40 bass guitar into a Fuzzdog Disorder Drive for a little grit, before the signal was split between a DI and Ampeg SVT Classic amplifier. Once the phase relationship between the DI and microphone had been fine‑tuned using a hardware Little Labs IBP on the DI, the SuperFET 47 gave the bass a really nice low‑end bloom. I compressed the signal moderately using my JLM LA500 optical compressor, but didn’t add any EQ during the tracking stage. I was very impressed that I didn’t feel the need to do any further processing. The microphone seemed to sit just right with the DI and the drums. In the mix, I simply notched out a little around where the kick sat (60‑100 Hz) and it was perfect. 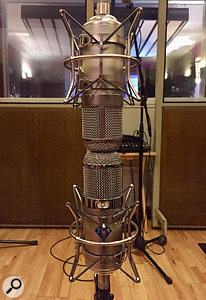 The mics lent themselves well to drum recording in a Mid‑Sides array.I was keen to try the review mics in a Mid‑Sides configuration, and recording an acoustic guitar on a session seemed like a good test. The acoustic guitar had quite a bright timbre with a fair bit of attack to the sound. The mics were easy to manoeuvre into position, and sounded pleasant and credible straight away. After getting the guitarist to move back and forth slightly, we settled on a position at about 10‑12 inches back from the mics. Here the guitar sounded very natural and full, with presence but not overly hyped or bright. The polar‑pattern options meant that I could then try the Mid microphone in omni as well as cardioid, which added a small amount of extra ambience.

I used the SuperFET 47 during a vocal session, as I was recording a vocalist that has an incredible but occasionally thin‑sounding vocal, especially when singing in their upper range. I was drawn to using the proximity effect for which these microphones are famed.

The 47 lent itself well to my vocal production, as I tend to use cardioid for lead vocals, before switching to omni and getting vocalists to step slightly back (10‑12 inches) for any backing vocals. For me, this gives a little more space and ambience to the backing vocals, which can separate them from the lead without the need to reach for an EQ. The frequency response of the SuperFET 47 in omni is much more scooped between 4‑6 kHz than it is in cardioid mode, which also helps to allow the lead vocal to cut through and have more ‘presence’ than the backing.

Whilst tracking backing vocals on this session I also took the chance to see how the SuperFET performed next to a valve capacitor mic, as this was Flea’s main goal in the design and creation of the SuperFET 47 and 48 versions. Unfortunately, I do not have the valve Flea 47 to compare to, but I used a Golden Age GA‑47 (another Neumann valve U47 clone) as this seemed like a reasonable comparison. The SuperFET is impressive here and sounds pretty near identical. It still has all of the fullness of the valve mic as well as incredibly smooth highs.

This is a very nice, glamorous‑looking microphone that looks great next to any revered studio ‘classic’. The slight high‑end lift gives the mic a smooth brightness and presence, yet it doesn’t sound overly hyped or abrasive, even on bright sources. The cradle is easy to use and sturdy and the microphones were easy to position for Mid‑Sides recording, with the flat grille top meaning they butted up together perfectly. I do feel that combining the omni and figure‑8 polar patterns into one microphone could have been a good option, but I can see that Flea have tried to keep true to the original bygone microphones that they are emulating. Whilst the SuperFETs are much cheaper than a reissue Neumann FET U47, competition in the large‑diaphragm microphone market is fairly strong. There are many other clones out there and even some slightly cheaper options by manufacturers including Lauten Audio, ADK and Hammer Audio.

Overall, though, the Flea SuperFETs performed very impressively across the board for me. If you’re after an impressive‑looking, solid‑state workhorse microphone, then I think the Flea SuperFET series is great. It is definitely a microphone that I will be adding to my collection.

The market is incredibly crowded, so it’s well worth figuring out your budget and polar‑pattern requirements before doing some research. Alternatives range from the incredibly cheap Warm Audio WA‑47 Jr, through to the Soundelux U195, ADK Berlin‑47 T, Lauten Audio FC series, Brauner Phantom Classic, Bock Audio iFET and, of course, the reissued Neumann U47 FET. The Flea SuperFETs are priced at the upper end of the spectrum of mics listed, but are still much cheaper than the Neumann.

You can hear recordings made with the SuperFET 47 and 48 by going to the online version of this article, at http://sosm.ag/superfet‑1018.htm.

Flea have made a name for themselves building high-quality, honest recreations of some of the most revered and well-loved microphones. The tradition continues here with the SuperFET 47 and 48. They are well-manufactured, great-sounding, versatile microphones which hold their own sonically next to 47-style tube microphones.