The Neumann U47 is one of the most revered of all studio mics, and while there are plenty of 'clones' available, Flea have gone the extra mile in their quest for authenticity. 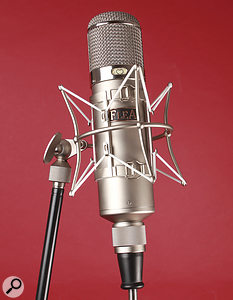 Neumann's U47 was launched in 1948 and originally marketed by Telefunken, who put their name on the mic. It was the first commercially available switchable‑pattern cardioid/omni capacitor microphone, and was built around the M7 capsule (with a diaphragm 12 microns thick), teamed with a VF14 valve in the amplifier/impedance‑converter stage. This was a Telefunken pentode valve in a circuit that actually ran it as a triode, and it was run with its heater supply below the specified voltage to extend valve life.

Curiously, the early U47s used PVC as a diaphragm material, in contrast to the more stable Mylar used in most of today's mics. The PVC ones had a tendency to stretch with age, and if you are lucky enough to find an original, expect to spend a lot of money having it restored. The original VF14 valve is also long discontinued, so if you do manage to find one, the price will probably scare you! Neumann changed the M7 diaphragm material to the more stable MCF (Macrofol) compound during the 1960s, and it is this newer material that is used in the Flea F7 capsule fitted to the review microphone.

Today, several companies build near replicas of the U47, though there are inevitably some concessions to modern life, such as IEC power sockets, lead‑free solder and re‑engineered components where the originals are no longer available. Flea are, however, very keen to point out that their parts (other than the German connectors used in some models) are made in their native Slovakia and based on the original specifications, while their capsules are skinned by mic‑repair specialist Siegfried Thiersch in Germany. They use no Chinese parts at all.

The Flea 47 is described as an exact replica of the U47, the F7 design being copied from Neumann's original M7 capsule. However, the mic can also be ordered with an F47/49 capsule, or a Thiersch‑skinned PVC‑diaphragm M7. The Flea designers have also replicated the important BV8 transformer used in the original, employing the same alloy mix for the laminates. The mic will work with Telefunken EF12, EF14, UF14 or VF14 valves (the review model came fitted with an EF12). Flea recommend the EF12 valve as sounding closest to the original VF14, and the price of the microphone is dictated by which valve you choose. An original VF14 valve in good condition can fetch around £1400, so that's not a cheap option! Flea's Magnum version of this mic, fitted with the F47/49 capsule, is slightly more sensitive and has a more open‑sounding high end than the F7‑capsule version.

Cosmetically, the mic has a no‑frills, vintage appearance with a wide, dull‑nickel‑plated, Duraluminium‑alloy body of the same dimensions as the original, and an all‑in weight of 660g. A recessed slide switch selects between omni and cardioid patterns, while two copper‑coloured plates bear the Flea name and the microphone model details. There are no pad or roll‑off switches on the mic. Three layers are used for the wire basket, again the same as the original, and there's a choice of a polished‑chrome or matte‑finished outer grille. The mic comes with its external mains power supply and a substantial seven‑pin locking cable. Apparently, Flea also offer two versions of the power supply, one a copy of the vintage original and one a little more modern. A wire‑frame shockmount is also supplied. The mic itself resides in a velvet‑lined wooden box, and the whole kit packs into a large metal camera case.

If you're highly experienced, you can even buy the microphone as a kit of parts and assemble it yourself, which would save you a significant amount of money, though the capsule backplate would still need to be skinned professionally. This isn't a job most people can do on the kitchen table! If you're buying it in kit form, you also have to source your own valve.

It's hard to tell what makes the U47 so special by looking at its paper specifications, but then that's true of so many revered pieces of studio equipment. The original U47 was designed as a general‑purpose mic, and it did indeed work well across a wide range of sources, though it still seems to be regarded by many as being primarily a vocal mic, which really doesn't do justice to its versatility. As with the original, the Flea 47's frequency response is an unremarkable 35Hz to 18kHz, while its sensitivity of 25mV/Pa (at 1kHz) compares favourably with that of other large-diaphragm capacitor mics. Being a valve mic, it is not especially quiet, but in typical close‑miking applications, noise should not be an issue.

The Flea 47 is shipped with its own power supply and seven-pin XLR cable.

When I first powered up the Flea 47 I could get no signal from it, but a quick look inside the body revealed that the metal‑jacketed valve had slid out of its socket in transit and was resting against its protective foam ring. It took but a moment to re‑seat the valve, after which all was well. In fact, I'm glad that I was forced to open the mic, as the internals are well worth a look. Everything is made using chunky, old‑school components on a very nicely engineered chassis, and the whole thing has an air of period authenticity about it. Most of our tests were done in cardioid mode, as this more readily shows up any weaknesses in performance, but the mic also works well in omni mode (with the caveat that the off‑axis response isn't quite as even as you'd expect from a dedicated small‑diaphragm omnidirectional mic). You can listen to some recordings made using the Flea 47 at /sos/sep11/articles/flea47media.htm.

My initial speech test revealed a relatively uncoloured but very clear response, devoid of the usual presence peaks or top‑end lifts: the highs come across as smooth but with plenty of upper reach to capture the detail. Should you need something more assertive, a little gentle EQ can be used to tailor the sound to a wide range of vocal styles. As you'd expect from a valve mic, the sound is certainly warm, though with a less overblown low end than my own AKG C12VR (when used without its low‑cut filter). A second test was done on a session with a female vocalist, and again the mic suited her voice well without producing any problems that needed excessive EQ to fix. I did need to add a little air to sit the vocal in the mix, but that's not unusual when mixing pop music. What did surprise me, however, was that the Flea 47 turned out to be considerably more sensitive than my C12VR.

On acoustic guitar, the Flea 47 delivered a credible sound straight off, while the C12VR needed a little presence boost and low cut to achieve a similar sound. On electric guitar, both the Flea 47 and the C12VR produced very workable sounds when set up around 250mm from the grille and just in from the edge of the speaker cone, but the difference in tonality was very noticeable, and I felt the Flea came closer to how the amp sounded in the room. Finally, hand percussion was reproduced well with the Flea 47, while the C12VR needed presence boost and low cut to get a similarly realistic sound from my old darbuka.

While this reborn 47 isn't a budget mic by any means, it fills the role of its Neumann ancestor in being an extremely able all‑rounder, as well as being a solid performer on vocals. It is, however, difficult to test the degree of authenticity of the sound, because even if you hire in a few old U47s, the chances are they'll all sound different due to the ageing of the components. When picking a mic to suit your own voice, it's always best to try a few mics to see what works best, but where you need a mic that can be massaged to suit many different singers, the Flea 47 fits the bill nicely, as its lack of obvious coloration makes it easier to shape using EQ. The Flea is also a very practical alternative to an original U47, as these may need a lot of expensive TLC to keep them going.

Of the currently built clones, the Wunder Audio CM7 and Wagner 47 are often cited in discussions between engineers as being the closest alternatives to a U47, though models from Korby, Soundeluxe, Telefunken and Peluso also attract favourable comments. The difficulty is in saying which comes closest to the original, as no two old U47s sound exactly alike! My view is that a great mic is a great mic whether or not it sounds exactly like something built half a century ago.

Countries of the former Czechoslovakia (Slovakia and the Czech Republic) have a reputation of engineering quality comparable to that of Germany, so it was no surprise to me to find that the company with the reputation for making some of the best vintage 'clone' microphones is based in Slovakia.

On one of my frequent trips to the region, I decided to drop in on Flea and see them for myself. Flea are based in Považská Bystrica, on the Váh river in Slovakia, and are owned and run by Jaroslav Kotrla, Miloš Rojko and Ivan Hako (pictured from left to right), all of whom are musicians as well as technicians.

The Flea 47 reviewed here is an exact copy of the original Neumann U47, but as Flea are a boutique company, they are able to individually fine‑tune their microphones to customers' requirements (the Flea 47 they made for Peter Gabriel, for example, had an integrated pop filter included). There are other little 'tricks' they can employ to tailor the microphone to the individual, such as making small changes to the holes drilled into the diaphragm backplates, which are apparently critical to performance. They don't charge any extra for this fine‑tuning, and there's also no extra charge for pair‑matching — a stereo pair will cost the same as two individual microphones. John Willett

If you want a modern mic that stays true to the U47 tradition, you'll be hard pushed to get any closer than the Flea 47.