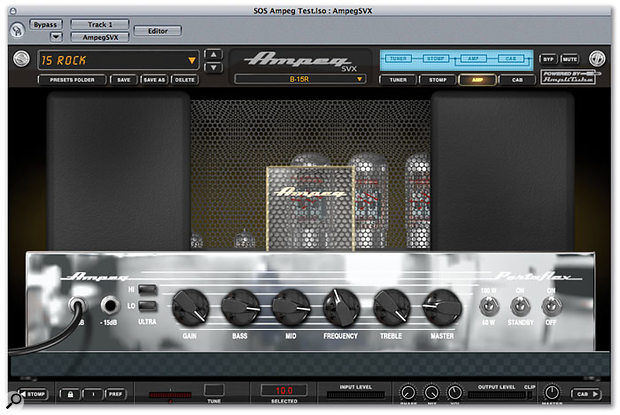 Most guitar amp modellers can be pressed into service on bass guitar, but now IK Multimedia have teamed up with Ampeg to create a plug-in dedicated to recreating bass amp sounds.

IK Multimedia quickly established themselves in the guitar amp plug-in market with Amplitube. Like most of its rivals, this included models which were based on well-known hardware, but only unofficially. This time around, however, they've collaborated with Ampeg to design a plug-in that models the tones from a range of classic Ampeg bass amplifier and speaker systems. RTAS and VST platforms are supported on both Mac OS and Windows, along with Audio Units on Mac only, and protection is by means of the now-familiar USB iKey used on previous IK Multimedia products. This requires that you go on-line and register to download the licence into your key, but once this is done, you can install the program on multiple machines and simply move the key when you want to work on a different machine.

The plug-in comprises a three-part signal chain plus a tuner. The signal passes first though a choice of eight stomp pedals before hitting the amp and finally the speaker/mic combination. In most respects this is similar to the signal path in a conventional guitar amp plug-in. For your money you get models of four Ampeg amplifiers, six Ampeg cabinets and a choice of six microphones. The emulations are created using the same 'Dynamic Saturation Modelling' technology used in Amplitube 2.

The Ampeg amps modelled comprise the SVT Classic, B15R Portaflex Flip Top, BA500 and SVT4 Pro, and Ampeg also provide the role models for two of the the stomp effects, specifically the SPC-OCT octaver and the SCP-OD overdrive. Presets are arranged both by amplifier model and by playing style, and of course you can create and save your own patches in the usual way.

If you've used Amplitube, the layout of IK's Ampeg SVX should hold few surprises. The stomp pedals have their own virtual pedalboard window, complete with simulated wooden floor and a choice of volume and wah pedals (though I couldn't get my foot up to the monitor to test it!). You can have up to six pedals running at a time, which for bass has to be enough for anyone. In addition to the two Ampeg pedals mentioned already, there's also an analogue-style chorus that doubles as a vibrato pedal, an analogue-style delay, a compressor with the characteristics of a popular vintage model used extensively on bass guitar, and an envelope filter, plus the bass wah and volume pedal. All the stomp boxes have relatively few controls, to match their real-life counterparts, so setting up is dead easy. Similarly, the four amp heads come up as photorealistic front panels with knobs and, where applicable, graphic equaliser sliders. Parameters can be automated to the degree that the host software supports plug-in automation. 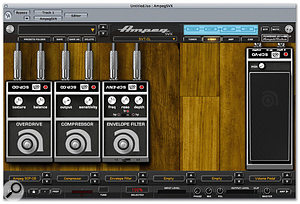 The range of stomp-box effects includes a couple modelled after named Ampeg designs.When it comes to cabinets, you again get photorealistic panels, complete with the chosen mic in front of the grille (plus the rather neat option to hide the grille cloth so you can see the speakers). If the Match button is on, the correct cabinet will be automatically chosen for each amplifier type by default, but you can of course mix and match amps, speakers and microphones to come up with your own combinations. Your virtual mics can be set up on-axis or off-axis at a choice of near or far distances and with adjustable room ambience. This is a great help in getting rid of that sterile, DI'd bass sound, but if you want to retain an element of the DI'd tone, there is a control to balance the 'miked' and DI'd sounds, and another to change the delay time between the two to allow for phase adjustments. This arrangement very closely emulates the way basses are often recorded in conventional studios. The mics chosen for the purpose of creating the models are easily guessed from the model titles: Dynamic 20, Dynamic 57, Dynamic 421, Vintage Dynamic 20, Condenser 87 and Condenser 414. As to the cabinets themselves, these range from the 2 x 10-inch BA500 to the 8 x 10-inch SVT 810E via the 15-inch B15R and the 2 x 12-inch PB 212H, which features an adjustable HF driver.

The DI'd sound from the virtual amp can be balanced with a 'miked' sound through a modelled cabinet.

Setting up IK's Ampeg SVX is as easy as you'd expect and it produces the whole spectrum of bass sounds, from raw and dirty to deep, clean and punchy. In addition to the vast library of more or less conventional electric bass sounds, there are also some partly successful bass synth patches created using the octave divider, distortion and envelope filtering (as with its analogue counterpart, the octaver only works correctly on single note lines, not chords), but where it really scores is in nailing all those classic bass guitar sounds you hear on records. The B15R model is particularly adept at delivering those slightly dirty bass sounds beloved of rock players. In fact the only mild frustration is that, like Amplitube 2, the first time you open an instance of the plug-in in your song it takes a long time — a little over 20 seconds on my machine. Subsequent instances, however, open almost right away.

In Logic 7.2, I could get seven instances running at once before the performance meter showed the leftmost processor of my dual-2.7GHz G5 was close to maxing out. Eight pushed it into glitching. It seems that all instances of the plug-in try to run on just one of the two processors, so I could find no way to get a higher plug-in count, even though the right-hand processor was showing zero activity and the old Logic 'stop then start again' trick didn't fix it. This is unlikely to become a problem, as I can't see many people wanting to run seven bass guitar amps at one time, but it is something to be aware of.

It could be argued that the cost of this plug-in is a little on the high side for something that only does bass guitars, especially when you consider that Line 6 give you a USB audio interface, guitar modelling, bass modelling and preamp modelling for less, but in reality this is a specialist product that does exactly what it is intended to do and to a very high standard. If you plan to recording bass guitar on a regular basis and need a plug-in that can rival the sound of a miked top-flight bass amp, Ampeg SVX is probably the most sophisticated option on the market today.

There are alternatives at all price points, from the bass amp that comes as part of Logic and Garage Band upwards. Hardware bass preamps based on modelling are also an option. Furthermore, most guitar amp modelling plug-ins can be set up to give a good bass sound, albeit with less flexibility than you have here. Nevertheless, at the time of writing, Ampeg SVX would appear to be as sophisticated as it gets when it comes to bass amp modelling plug-ins.

Ampeg SVX is a very versatile and easy to operate bass amp modelling plug-in that covers all the normal musical genres and a few more besides. If you can't or don't wish to mic bass amps while recording, this is probably as close as you'll get to the same sound using a plug-in.