The Liveguitar H-clamp is the brainchild of aerospace engineer Robert Aitchison, who set out to devise a practical and secure way to fix a conventional microphone to an acoustic guitar for live and recording applications. We've already seen clamp systems with built-in microphones, but Robert's system works with almost any third-party microphone. Because of how it's designed, the H-clamp is strong and secure enough even to hold a large-diaphragm capacitor microphone and shockmount if necessary, although in normal applications a small-diaphragm capacitor is more likely to be used. 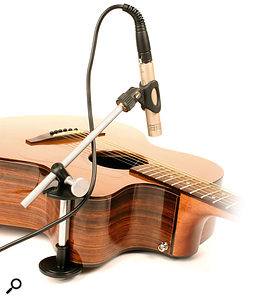 Machined to very high tolerances and made mainly from aluminium, the H-Clamp comprises a clamp with a small swivel joint and a short boom arm. The clamp mechanism utilises two synthetic discs that sandwich the edge of the guitar. Soft 'O'-rings set into the face of the discs prevent both slippage and damage to the guitar surface. A bar joins the discs, with a simple axial thumbscrew arrangement for tightening, and there's a little 'give' built into the system so that the clamp fixes properly onto guitars where the thickness of the instrument tapers slightly towards the edge. Although the clamp seems to apply minimal pressure to the surface of the guitar when in place, it is extremely secure, and the boom arm also locks tightly, so you can be sure that your microphone will stay exactly where you put it. Depending on which way around the boom arm is fitted into the swivel joint, the arm can be made to lean over the guitar or away from it, and then you can use a standard mic swivel-clip or shockmount on the end of the arm to direct the mic appropriately. The end of the boom arm is threaded to take a standard European-size mic-adaptor thread and is almost 200mm long, allowing you plenty of flexibility to choose the best mic position.

Currently the clamp is available in all-black (£65) or a version having black fittings with silver rods (£60). The range of adjustment seems adequate to fit most acoustic guitars, from full size (110mm depth) to 85mm depth, which easily accommodated my Taylor Big Baby at the one extreme and my Martin D41 at the other. Even with relatively large mics, the system feels secure and doesn't throw out the balance of the guitar as much as you might expect.

The H-clamp comes boxed with an extremely comprehensive instruction manual, but it isn't in any way complicated to fit. While it doesn't offer the same degree of positional flexibility as a separate mic stand, you can generally find a sweet spot somewhere within its range, and because the mic moves when the guitar moves, you don't get any change of timbre or level when the player shifts position. The stand is easy to position so that it doesn't get in the way of your playing, and additional accessories (such as a longer boom arm) are planned. There are also models to suit cellos and acoustic basses, with versions for other instruments under consideration. You can buy the H-clamp online and it's also stocked by six music stores in Scotland, Yorkshire, The Midlands and the South West. Any new dealers will be posted on the web site.

The physics behind this clamping system may not be based on rocket science but using aerospace engineering techniques to build it has certainly paid off, and it's clear that a lot of thought has gone into refining the basic principle. To date, this is the only clamp system I've seen that can mount third- party microphones, and I'm impressed by how well it works. Paul White

SUMMARY A great and affordable solution for mounting microphones on acoustic guitars. Equally practical in the studio and for live use.

We've already touched upon some of the solutions to guitar tuning problems, but sometimes it's hard to track down the source of those problems to start with. Consequently, I thought it was time to come up with a simple procedure to help guitarists locate the source of their tuning issues, so that they can deal only with the area that is actually causing trouble.

* Sort Out The Strings: A common cause of tuning instability is badly fitted strings, or strings that haven't been 'stretched' after fitting. Most guitars don't have the benefit of locking machine-heads but you can achieve the same effect by knotting the string through itself once it has been passed through the hole in the head's shaft. Ideally, you shouldn't have more than three turns of string around the peg and the wraps should all be neat so they don't shift when tension is applied. If you need to change your machine-heads but can't afford or don't like locking heads, Wilkinson have a low-cost model with two holes in the peg. By passing the string through one hole, then back through the other, you get all the benefits of a locking head without the complexity or cost.

* Check The Neck: If all is well with your strings and machine-heads, before doing any further tests, check that your guitar's neck is bolted tightly to the body (unless, of course, it has a fixed neck). If the screws are loose, the neck only needs to shift by a tiny amount to mess up the tuning.

* Do Some Stretching: Assuming that the neck joint is OK, the next step is to plug your guitar into a tuner and then tune the strings to pitch. Once they're tuned, grab each string in turn, about halfway along its length, and pull it away from the guitar fairly hard to increase the tension on it, then check the tuner again. If it has gone flat, repeat the pulling process and check again until there is no further downward movement in pitch. I use this method all the time and can usually change a set of strings 10 minutes before a gig with no subsequent tuning difficulties.

* Cracking The Nut: Once all the strings are stretched and stable, work on a string at a time — one useful technique is to bend the string behind the nut to pull up the pitch, then check the tuner to see whether it returns to its original pitch or remains slightly sharp. If it stays sharp, the culprit is most likely either friction at the nut or the string trees, if the latter are fitted. String trees can be lubricated using a mixture of grease or vaseline into which plenty of powdered soft pencil lead has been mixed (just use fine sandpaper to powder the pencil lead). You can also use this mixture in nut slots, but first check that the nut slots aren't pinching the strings. Also be sparing with the amount of lubricant you apply, or you may deaden the sound of the open strings. If the strings are binding in the nut, you may need to widen the slots using a set of nut-slotting files. Graphite or PTFE compound nuts may improve the problem but if you're not experienced in setting up guitars it's best to get these fitted by a professional, as some slot-dressing is invariably required.

Once you've fixed or lubricated the string trees and nut slots, repeat the tuning tests by doing a few excessive string-bending exercises and also by pulling the strings behind the nut to force them to go sharp. In all cases they should return to exactly the right pitch.

* Test The Tremolo: Tremolo arms can cause problems. These are easily detected by using the tremolo first to drop the pitch, then to raise it. Again, using your tuner, ensure the strings come back to the right pitch. If not, you've found your problem. As a rule, if the tremolo is to blame, using it to push all the strings flat will result in most or all of them still being slightly flat when you release the arm. You may also find that they all stay slightly sharp after an 'up-bend' using a floating tremolo. One simple cure is not to float the tremolo (tighten the springs so that the bridge comes to rest against the body when the arm is released). However, doing that restricts bends to the downward direction only. There may also be residual problems due to string friction over the bridge saddles, where you can again use small amounts of your custom lubricant to ease the problem. Alternatively, fit low-friction replacement saddles. Low-friction saddles can even ease tuning problems on some fixed-bridge guitars if you go in for particularly enthusiastic string-bending.

If you want the tremolo fully floating, check that the pivot points are OK. The traditional Strat tremolo is held in place by six screws, which must be loose enough not to bind when the tremolo is operated. It can be advantageous to undo the middle four screws by half a turn more than the outer two screws. The other popular system uses two posts that have 'V' grooves, into which the knife edge of the tremolo plate locates. If the knife edge has become damaged, you may find that filing it back to a sharp edge improves stability, but in extreme cases you may need a new tremolo. Again, Wilkinson have a nice and inexpensive replacement for a traditional Strat six-screw tremolo, with a push-in arm that doesn't flop around like some of the screw-in versions.

Another thing to look out for is tremolo moving parts catching on the woodwork inside the guitar, so check that the block moves freely and also confirm that the springs aren't catching on anything.

Once you've addressed all these points, and applied suitable remedies, you should have a guitar that will stay reasonably in tune. However, all guitars will change pitch to some extent when subjected to temperature changes, so always try to leave your guitar out in the room where it will be played for long enough to settle down before final tuning. Paul White 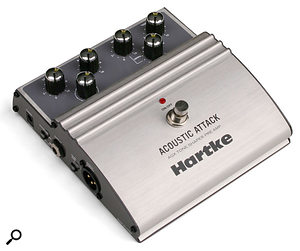 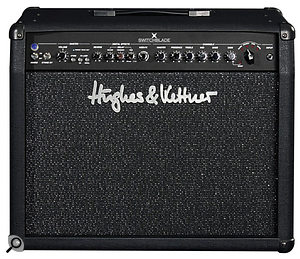 Hartke have announced the new AGX Acoustic Attack preamp pedal for electro-acoustic guitars. It's designed to make an electro-acoustic guitar running through a PA or amplifier sound more 'acoustic', using a tube and microphone emulator alongside a tone-shaping three-band EQ with sweepable mid-range. The AGX Acoustic Attack also acts as a DI box and features a gold-plated XLR output and an attenuator. Its aluminium construction is sturdy, so it should be well-suited to use on stage. It's available now, costing £89 including VAT.

Hughes & Kettner have added two new combo amps to their Switchblade range. The Switchblade 50 and 100, in 1x12 and 2x12 configurations respectively, have an all-tube design and four channels. Both amps are fully programmable and feature digital multi-effects, with 128 different user presets. The included MIDI footswitch allows the user to select presets on stage and features a tap-tempo switch for use with delay effects. Both new amps should be available now, costing £999 and £1159 for the 50 and 100 respectively.