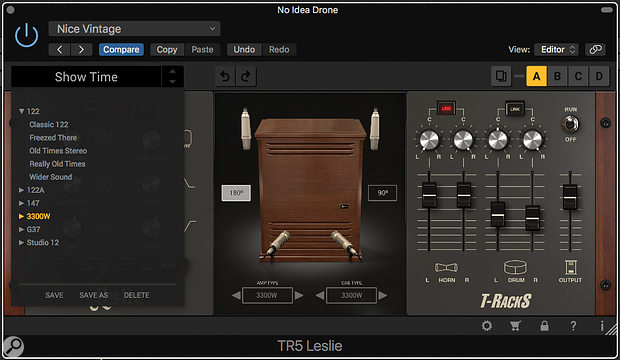 IK Multimedia have launched a collection of Leslie cabinet emulations, designed in collaboration with Hammond USA and Suzuki Music Corporation of Japan. The set comprises five Leslie amplifiers and six cabinets, which can be mixed and matched to create your own permutations. The Leslie Collection is available within two separate IK ‘shell’ programs: the Amplitube guitar amp modeller and the T‑Racks 5 mastering/processing suite.

The amplifiers are modelled using the same Dynamic Interaction Modelling Technology IK use for modelling guitar amplifiers while the cabinets are replicated using Volumetric Response Modelling. This is an IK hybrid modelling technology that, they say, also captures the true audio behaviour when the cabinets are miked in a suitable performance space. Certainly, recreating the Leslie sound is quite challenging as there are many elements to take into account, from the amplifier and speaker characteristics to the dynamic effects of the moving upper and lower rotors and the way the sound from these interacts with the room and mic setup. The speeds, acceleration and deceleration characteristics of these dual-rotor models are also based on the performance of the original mechanical designs, though there are controls to allow user tweaking.

Top of the list is a classic early‑’70s Leslie 122, as heard on so many rock, jazz and blues records. This has a slightly warmer tone than the 122A, which is also included to offer a more ‘present‑sounding’ alternative. Next up is the Leslie 147, again similar to the 122 but with enough subtle differences to make it worth including as a separate emulation. The one modelled here is a mid‑’60s unit without the horn deflectors fitted.

The Leslie 3300w was a powerful design capable of delivering 300W from its solid‑state power amp and valve preamp, and again, found favour across pop, rock, jazz and blues genres. The Leslie G37 was another hybrid design, but its much more compact dual‑rotor cabinet was fitted with a V30 12‑inch speaker voiced specifically for guitar. Finally, the portable Studio 12 uses a similar hybrid amp arrangement but was voiced for keyboard players, with a 12‑inch Eminence bass speaker that better accommodates the low‑frequency capabilities of organs.

The left‑hand section of the plug‑in GUI is arranged as pages for Setup, Amp and EQ, with the Slow/Fast control always visible at the bottom of the screen and with Brake as a separate control button. Setup lets you change the virtual mic setup and distance, rotation speed for the drum and horn, and the acceleration and deceleration rate of each. Simulated spring reverb can also be added before the amplifier stage.

The Amp section reveals the controls for the selected amp model with Gain, High‑Pass Filter and Volume. The overdrive character of the amp can be adjusted using the Contour, Tube Drive and Tube Mode controls. EQ provides overall parametric EQ. High‑quality graphics show the cabinet and the mic setup and there’s also a mixer section allowing adjustment of the four microphone channels (two for the horns, two for the drum) for level and pan. Despite the complexity of the models, these Leslie emulations don’t impose a huge hit on CPU resources.

I found that I could get very close to the sound using the rotary speaker emulation in Logic Pro, so if you already have this, you may not feel IK’s collection is quite so essential, but if you don’t already have good rotary‑speaker emulations, these IK offerings sound very realistic and work well on organ, guitar and many other sound sources such as synths, eBow guitar and even voice. While many users will gravitate towards the classic 122, the other models are definitely worth exploring as all exhibit different intrinsic coloration; the relatively bandwidth‑limited sound of the more compact cabinets can help lend focus to a track. If you’re a fan of the Leslie sound, as I am, this is one set of emulations you should check out.