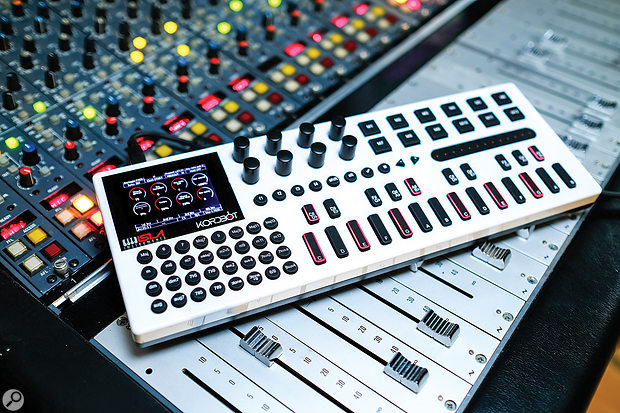 Is the Kordbot a chord generator? An arpeggiator? A MIDI controller? It’s all three...

The rise of crowd-funding in the last 10 years has opened up the music tech market to new and sometimes niche innovations which might not otherwise have existed. The Kordbot is a case in point: it’s a MIDI controller that, rather than focusing on player performance, focuses on the art of creating and playing chord structures.

The Kordbot is housed in a solid plastic case adorned with no fewer than 78 back-lit rubber buttons, eight rotary encoders, a touch-sensitive strip and a 128 x 64 colour LCD screen, all of which are used to fire off just about any chord you might care to imagine.

On the back there are MIDI In/Out sockets, USB, Pedal and Footswitch inputs (on 3.5mm jacks) and a 9-12 V DC power socket. Bluetooth MIDI is also possible. The Kordbot doesn’t come with a power supply but it can be powered via USB. There is an SD card slot on the right-hand side, for saving and loading setups. Overall the build quality feels OK — the pots do wobble a bit, but no more than you might expect given the price.

In the bottom right is a two octave set of keyboard buttons for the purpose of playing melodies and chords. Bottom left is a bank of 8 x 4 circular chord modifier buttons which have chord types printed on them (Maj, Maj7, dim7, etc). Top right is a 6 x 2 bank of larger square buttons which are chord memory buttons (hereby known as MEM keys). In the middle is a strip of 10 buttons which include four function buttons, shift, alt, confirm, cancel, and octave up and down. These, along with the eight rotary encoders, are used to navigate, select and change values in the software, all assisted by the detailed LCD screen, which is bright and looks good from just about any angle.

Round the back we find 3.5mm pedal and footswitch inputs, MIDI I/O ports, a USB port and a socket for a 9-12V external PSU.

Upon power up, you are presented with a menu screen with five options: Play Mode, Sequencer, File Manager, Settings and About. Play Mode is where you’ll spend most of your time. Sequencer is a yet-to-be-implemented chord sequencer. File Manager allows for loading and saving of setups to SD card and Settings contains MIDI settings, foot controller setup, Arpeggio Builder and Scale Builder. Isla Instruments are keen to point out that the firmware is still in beta. The Sequencer and Chord Builder functions, for example, are simply met with a ‘coming soon’ pop-up or are greyed out completely. Despite this, the majority of the Kordbot functions are present and usable.

When in Play mode, the Kordbot works in one of four basic sub-modes which dictate how chords are generated. The first is ‘Key+Mod’. In this mode you select a chord type using the chord modifier keys under the display and then press a note on the two octave keyboard. For example, pressing m7 followed by the C will output a C minor 7th chord. Pressing sus2 followed by G will give you a Gsus2 chord. Chord inversions can be achieved by using the function keys. Selecting Maj7, pressing F1 (function key 1) and then pressing D will give you the first inversion of a DMaj7.

Whilst in any mode, you can store chords by hitting Shift and any of the 12 chord MEM keys. This will save the last played chord and the MEM key will light up to show that something is stored there. Both the Chord Inversion and Chord Spread (which allows bigger chords by adding more notes in higher octaves) will work on MEM key playback, so even though a chord is saved, there’s still some fluidity to its exact formation which can be decided on playback.

Next is Diatonic mode. Here the 32 chord modifier buttons contain specific chords. The mode is called Diatonic because, by default, there are diatonically related chords stored in each row based upon a specific key. For example, the first row contains a C major scale and its diatonic chords in order. The second row is G Yo (a scale commonly used in Japanese traditional music), the third C natural minor and the fourth Ab blues. These assignments can be customised using the Diatonic Progression Editor, which allows you to pick from 49 preset or 10 user scales. For example, in order to change the first row from its default C major scale chord progression, you would enter the Diatonic Progression Editor, select a root note, say G, then select a scale, say Pentatonic Minor, then press OK. The first row of Chord Modifiers keys now plays the chords from the G Pentatonic Minor scale. My only complaint about this system is that it doesn’t allow you to preview the chords and scales whilst you are selecting, so it relies upon you knowing exactly what key and scale you want to use before you commit.

Diatonic mode also contains a ‘Progression Suggestion’ feature. By lighting up keys, it suggests chords that might follow nicely from the chord you’ve just played. For example, play chord II and the Kordbot will suggest IV, V and VII as likely next candidates. Play the tonic chord and all chords in the scale are suggested. In this mode, the keyboard also lights up to show you which notes are used in the current scale, which is a nice touch. I suspect Progression Suggestion is a fairly simple algorithm, there doesn’t seem to be any higher analysis of your chord progression going on and as such it is of limited use, but perhaps it might help those just starting out to achieve the most common chord progressions.

When in Diatonic mode any chord can be stored to the 12 MEM keys just as before. In fact, the contents of the MEM keys are persistent throughout Play mode switching, so if you’re working on a chord progression and you find you’d rather be experimenting in Key+Mod mode rather than Diatonic mode, you can simply switch modes without losing the contents of your MEM keys, which is great.

Diatonic Strum mode works similarly to Diatonic mode. The Chord Modifier keys still store the same diatonically related chords based on the keys and scales you’ve chosen in the Diatonic Progression Editor. The difference is no MIDI is output when you press a Chord Modifier key. Instead the Kordbot waits for input from the touch strip. Sliding your finger left to right on the strip will produce the notes from the currently selected chord, rising in pitch. The exact order of the notes produced is taken from the Arpeggiator settings, which I’ll come to in a moment. The overall feeling is not unlike strumming a guitar and it’s a clever use of touch-strip technology. Strumming also works with the MEM keys. It would be nice, however, if you didn’t have to keep the Chord Modifier or MEM key held down whilst you strum.

The last mode is called ‘Polyphonic Key’ and turns all the Chord Modifier keys into single-note triggers. Along with the keyboard keys, you have over four playable octaves without resorting to using the Octave shift buttons. I suppose if you’re short on MIDI controllers you might want to use the Kordbot as a clip launcher for Ableton Live or some such, but it’s unlikely you’d choose the Kordbot specifically for this purpose.

At the heart of Kordbot is its arpeggiator. No matter what Play mode you’re in, the majority of the screen is dedicated to arpeggiator functions. Once enabled, any chord will be arpeggiated. As well as the usual options such as note length, pattern (10 variations of up/down), clock division, swing, etc, you can choose from an additional 10 editable note and velocity patterns. These reorder the notes and apply a velocity and rhythmic pattern to create more variation.

Combined with the Chord Spread function, which adds more notes to the base chord, the arpeggiator is capable of producing complex note sequences that go far beyond the normal up/down patterns. The Arpeggio Builder, which allows for editing of the note, velocity and rhythm patterns, is probably the most complex screen on the Kordbot and can feel a bit like editing through a letterbox, but with a little perseverance, it’s possible to get some very unique arpeggio patterns.

After all this customisation and chord hunting, you’re going to want to save your hard work. In the File Manager you can mount, format and prepare SD cards and you can save and load System Data, which really means ‘everything’. There are no other save or load options, which means in order to save a tasty chord progression, you have to save the entire state of the Kordbot. This doesn’t seem ideal, the most obvious omission being some way to save and load only chord sets. It would also be nice to save and load arpeggio patterns, scales, chords and sequences (when they arrive). Isla Instruments do recognise the need for more save options and hope to have something in a future OS version.

After learning the basics, I found the Kordbot was throwing out useful chord progressions. It’s easy to lose time simply experimenting, which is a good thing in my book. Add the arpeggiator into the mix and you have an instant melody machine. Once you’ve saved a bunch of chords to the MEM keys, it’s fun to switch to Diatonic or Polyphonic mode and use the keyboard keys to play along with your chords. Kordbot kindly lights up the notes of any chord being played, so it’s easy to find melodies that complement your chord structure. You can even play chords and melody on different synths thanks to the ability to set different MIDI channels for the MEM and note keys.

A minor gripe during performing relates to velocity sensitivity. Any button that can output MIDI is velocity sensitive, however in practice it is difficult to get any meaningful control over the sensitivity and in the current version of the OS, there’s no way to tweak the sensitivity or force it to output at a fixed value. This is something I hope Isla Instruments will improve in a future OS version.

If, like me, your memory capacity for scales and chord types is not what it once was, then the Kordbot could be an ideal companion — a compositional assistant that knows many more chords and scales than you, and can remember all the good progressions you come up with together. Whilst there are a few software equivalents, I can’t think of anything quite like it in hardware form. Isla Instruments have put a lot of value for money into the Kordbot and mostly it works very well. It’s true that there are some features promised that haven’t yet seen the light of day and a few existing features that could use some refining, but the OS remains under continued development.

Isla Instruments saw a gap in the market for a controller that can aid in song composition and they’ve produced exactly that. If you’ve ever wished for an easier way to write chord progressions then the Kordbot deserves your attention, and it might even teach you a thing or two about music theory.

Kordbot is an ambitious startup project and largely delivers what it set out to do: help MIDI composers and producers create better chord progressions. It’s easy to see why, for some, it could become a trusty partner in the songwriting process.