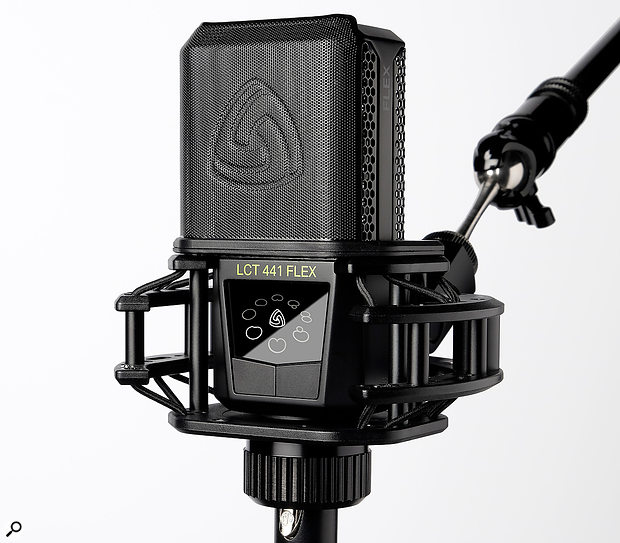 Lewitt’s new mid-priced mic is a classy and versatile affair that acquits itself well on a wide range of sources.

What we all want is a single microphone that can excel at absolutely everything, and while I don’t think such a thing quite exists yet, Lewitt have come up with a mid-priced, multi-pattern capacitor microphone that offers a great deal of flexibility with many applications across vocals and instrumentation. The LCT 441 Flex features the familiar Lewitt compact housing with push-button pattern control, and is built around a dual-diaphragm (three micron), one-inch capsule with a choice of eight directional polar patterns, which includes three reverse polar patterns. The mic comes with a bespoke shockmount, a foam windscreen, a pop filter with magnetic fixings, and a transport bag.

The manual explains that changing the polar pattern of a mic also affects its frequency response and degree of proximity effect, characteristics that can be exploited when recording different sound sources. The two buttons on the mic cycle through the polar patterns, where the display above backlights the currently selected pattern icon. Available patterns are: omni, wide cardioid, cardioid, supercardioid, figure-8, reverse wide cardioid, reverse cardioid and reverse supercardioid. What those reverse patterns mean is that the rear of the mic can in effect be made to behave as the front, so you can change direction without physically moving the mic. Not an essential feature perhaps but good to have as an option.

At the centre of the display is the Lewitt logo that lights red if clipping is detected. Somewhat more gimmicky is a random pattern selection mode activated by pressing and holding the rightmost button for over five seconds. I asked Lewitt why they added that and got the reply: “It’s our Easter egg. So we don’t recommend to pick your pattern randomly but rather use it to decide who is going out for pizza and beer.” You need a good sense of timing with these buttons, as pressing and holding either for two seconds locks the switches from making accidental changes. Repeat the process to exit.

To put some numbers on the mic, its sensitivity is 17.2mV/Pa, and its equivalent noise just 7dB A-weighted. Standard 48V (±4V) phantom power is required for operation and it can handle up to 144dB SPL (for 0.5 percent THD) with no need for a pad. There’s no low-cut switch on the mic so any filtering needs to be dealt with on your preamp. Should you be concerned about the size and weight of your mics, this model measures 138 x 52 x 36 mm and weighs 325g.

Looking at the frequency response graph in the manual, it can be seen that the mic’s response covers the expected 20Hz to 20kHz range but, as with most large-diaphragm mics, the response curve has a deliberate shape to it rather than being flat. Below 500Hz in cardioid mode (and very similar in the other modes, with some small changes to the presence humps), the response drops away smoothly to reach -5dB at 20Hz, which is useful in helping balance the proximity effect in the cardioid or figure-8 modes. Above 2kHz in cardioid mode there’s a gently rising response with shallow humps at around 4.5, 8 and 15 kHz, after which the response drops away to around 2dB down at 20kHz. In the figure-8 mode there is a bit of a dip at around 11kHz, and in omni mode there is a more pronounced presence peak at around 14kHz, reaching a maximum of about +7dB.

Before looking at how the mic performs, it is worth mentioning that the manual contains helpful practical advice and information that will be particularly useful to those just beginning their journey recording with microphones. It covers mic setups for vocals and many common instruments as well as explaining polar patterns, proximity effect, the effect of room acoustics and so on.

The quality and design of the shockmount and pop shield is similar to what you find with the more upmarket Lewitt mics, where the cradle holds the mic securely and the pop shield clicks into place and is held firm by magnets.

Given the gently rising response, I had anticipated a bright-sounding mic but my first speech recording test revealed that the mic has a fairly warm and smooth sound that picks out detail without over-emphasising it. Switching to acoustic guitar brought out a nice combination of chime and woodiness, with none of that upper-mid phasiness that sometimes becomes evident. If the sound isn’t exactly what you want, all the required frequencies are present so a little gentle EQ usually gets you where you need to go. Though the frequency response ripples in the high end vary a little between patterns, the overall sound was quite similar once the changes in proximity effect were taken into consideration.

But perhaps the biggest surprise was just how good this mic sounded on my electric guitar cabinet when set to its regular cardioid mode. What came back over the studio monitors was pretty much identical to what I was hearing in the room, with plenty of cabinet coloration underpinning the excellent note definition.

Overall then, the Lewitt LCT 441 Flex is a well-conceived, versatile microphone that delivers quality within a home studio budget. Those extra reverse polar patterns might not be considered essentials but they do let you try different mic techniques without having to move the microphone.

There’s no shortage of mid-priced, multi-pattern microphones on the market, so check out equivalents from Rode, AKG, Aston, MXL, Sontronics, sE and Audio-Technica, among others. As usual, try and audition as many as you can to find the model that best suits your voice.

A flexible all-rounder that works well with most studio instruments as well as vocals.