IK Multimedia are the latest plug-in manufacturers to bring us their take on two iconic compressors. 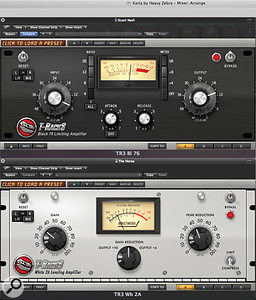 Available as individual plug-ins or as part of the new 64-bit T-Racks suite, there's little doubt as to what IK Multimedia's Black 76 and White 2A are based on: the classic Universal Audio 1176 and Teletronix LA2A hardware compressors. They function in stand-alone mode or as plug-ins supporting all the common DAW platforms in RTAS, AU and VST formats on both Mac OS and Windows. Sampling rates up to 192kHz are supported.

The original 'blackface' 1176 was available both under the Universal Audio and UREI brand names, and was an early class-A FET and transistor design, developed by Bill Putnam in the mid-'60s. It has a sound that can be flattering on both voices and instruments, adding clarity and definition to vocals and guitars, and also works well for beefing up drums without killing the transient detail.

Various revised designs were created to reduce circuit noise, and it is one of these versions, denoted by the letters LN after the model number, that is modelled here. This software version allows settings to be saved, can operate in mono or stereo, and features a reset button that toggles between a factory default setting and your current settings. An Off switch disables the compressor part of the circuit, for occasions when you just want to hear the coloration imparted by the virtual input and output electronics.

Rather than having a variable ratio knob, the 1176 uses four buttons to select ratios of 4, 8, 12 or 20:1, though pressing them all in at once produces an even more assertive effect that has become known as the 'nuke' setting, where distortion increases and the attack and release times are no longer fixed and stable. This mode is useful to add a bit of dirt and attitude to drums, bass and even vocals. As with the original, the gain-reduction meter bounces around in the red zone in this mode rather than confining itself to 0dB and below, although what this actually denotes in gain-reduction terms, I'm not quite sure! Since you can't push several virtual buttons at once, this version features an extra 'All' button.

As on the original, there's also no threshold control. Instead, the input gain control brings the signal up or down relative to the fixed threshold, and then there's the usual output make-up gain adjustment. A moving-coil VU meter with appropriate ballistics can be switched to show either gain reduction or audio level. When monitoring level, you can set 0VU to correspond to a level of +8 or +4dBm at the rear-panel outputs. A variable Attack control covers the range 20-800 microseconds, where fastest is fully clockwise, while Release runs from 50-1100 milliseconds, also fastest in its fully clockwise position. Interestingly, there a choice of stereo, dual-mono or M/S operation, more about which in a moment.

Recognisable by its contrasting white panel, the Teletronix LA2A 'Leveling Amplifier' (as it was originally known) uses a lamp controlled by the side-chain to change the conductivity of a photosensitive device, which in turn controls the signal gain. This opto-attenuator system has some peculiar non-linearities that give the device a smooth and musical sonic signature: one that often suits vocals, but also helps add warmth to bass instruments.

Here, the Gain control adjusts the output signal while Peak Reduction sets the amount of gain reduction applied. This time, the meter can be switched from +10dB to +4dB (corresponding to 0VU) and there's a Reset button and choice of stereo, independent left/right or M/S processing, much as with the Black 76. The Limit/Compress switch chooses between a fairly gentle compression and more aggressive, limiter-type operation, but as on the original hardware, there are no attack or release adjustments. What you get is what you get!

The front panels of these two IK Multimedia plug-ins are set out rather differently from those of their inspirations, although the actual controls and general styling are similar. There's additional switching on both plug-ins to set the type of mono or stereo operation: L=R links the two channels for stereo operation, L/R allows different settings to be set up for the left and right channels, and M/S enables Mid/Side processing, where the middle and sides components of a stereo signal are compressed independently.

Modelling hardware compressors such as these is no trivial matter, as there are so many elements that can influence the sound. There are the attack and release times, of course, plus the shape of the attack and release curves, but there are also subtle distortions introduced by the gain-control circuitry and by any valves and transformers in the signal path. In this case, there are also many different variations on the basic design, and not all examples will sound the same today as they did in 1972!

Comparing the Black 76 with the Universal Audio plug-in emulation of the 1176, I found that although I needed to use slightly different panel settings to achieve the same amount of signal output and gain reduction, the overall character was generally very similar, even in the 'nuke' position, though the UA version seemed to have a touch more definition and clarity. A tiny amount of EQ would be enough to bring these much closer together and, to be fair, such differences often exist between individual hardware examples. This really is a good all-rounder of a compressor, as it can be used quite gently when required, but at higher gain‑reduction settings or when pushed hard, it imposes a definite character that can help beef up a sound in a very musical and powerful way. In nuke mode, with all the ratio buttons down, the result gets very down and dirty.

Moving from the dark side to the White 2A, this again stacks up well against its UA equivalent, although, as with the 1176 comparison, the UA plug-in seems to have a little more clarity and focus. The nice thing about the White 2A (and all good LA2A emulations) is that you can pile on a lot of gain reduction without incurring unpleasant side-effects if you need to, while the limit setting provides a firmer but still musical type of compression. It sounds great on vocals and adds a nice polish to acoustic guitars. Used gently, the White 2A can also work well as a bus compressor, but I was particularly impressed with its M/S mode for final mix processing. For example, with the song I was working on, adding a small amount of low-ratio compression to the Mid signal and a little more to the Side really opened out the mix, while keeping the vocal nicely to the fore. Given their sensible pricing and the additional M/S features, these two plug-ins are definitely worth the cost.

Various companies have produced plug-ins that attempt to emulate these particular pieces of vintage gear as plug-ins. Universal Audio's own emulations are arguably the most accurate, and the only ones that are officially sanctioned, but require a UAD card to run. UA also still manufacture new 1176s and LA2As, and many other manufacturers have made hardware units inspired by these classic designs.

The Black 76 and White 2A plug-ins are the latest additions to IK Multimedia's Singles range, which, in essence, sees individual modules from their T-Racks 3 mastering suite spun off as separate plug-ins. This allows users who only want one or two of the modules to save money, and also makes the processors more useful in a mixing context. For more details, see www.ikmultimedia.com/trsingles/features/.

If you don't already own plug-in emulations of these classics, you should definitely check out IK's versions before you make a decision.