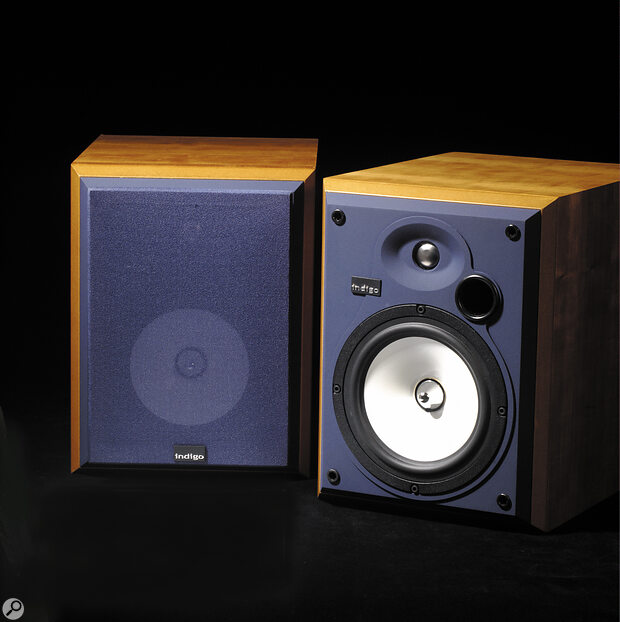 Paul White tries out a compact monitor from a new British company to see if it can rival the established names.

Indigo is a new name in loudspeakers, but the engineers behind these monitors have an impressive provenance reaching back to Tannoy and Mission, two of the top‑name UK speaker manufacturers. The Indigo Threes reviewed here are passive two‑way monitors, beautifully finished in real cherry‑wood veneer, and behind the acoustically transparent grille is a bevelled, nicely sculpted MDF baffle finished in dusky blue Nextel. There's no esoteric design used here, just the careful application of tested principles; the drivers themselves have been built for Indigo by the French company Audax.

The box size of these little monitors is just 300 x 230 x 310mm, but the cabinet walls are actually very thick with a full 20mm front baffle. The relatively small contact area between the baffle and the main body of the cabinet minimises transmitted vibrations, and a moulded plastic front port is fitted close to the bass/mid driver. The driver handling the low/mid has a 170mm doped‑paper cone built on a moulded plastic basket with a support structure which helps to break up rear radiation from the cone. A Kapton former supports the edge‑wound voice coil and a chrome‑finish phase plug at the centre of the speaker lends these monitors their distinctive look. An unusual feature of this design is that the cabinet uses no internal damping. All hard‑wired crossover components are held firmly in place by means of a flexible adhesive and the drivers employ Neodymium magnets, which renders any additional magnetic shielding unnecessary.

A titanium‑dome tweeter is used to handle the highs with the hard‑wired passive crossover, consisting of a fourth‑order LF filter and a second‑order HF filter, operating at 1.7kHz. Two sets of sturdy, gold‑plated binding posts provide connection to the speakers, and bi‑wiring is possible by removing the jumpers between the two sets of posts. An elliptical waveguide is machined in the front baffle to control the tweeter dispersion and the titanium dome is coated with some kind of lacquer, which may help to damp out the ultra‑HF resonances that afflict some other titanium‑tweeter designs.

Like any well‑thought‑out monitor, the Indigo is a collection of components well chosen to work in symbiosis, which accounts for its surprising efficiency of 92dB for one Watt at one metre. This means you only need an amplifier rated at between 30 and 100 Watts to get the best out of these speakers. The frequency response is specified as from 42Hz to 25kHz (though the brochure doesn't say whether this is 3dB down, 10dB down or whatever) and the maximum SPL claims to be 109dB at 1m. The speakers present an 8Ω load to the amplifier. Of course paper specifications, no matter how promising, don't mean much unless the monitors sound good.

Checked out with my AVI 100 Watt‑per‑channel integrated amplifier, the Indigo Threes come over straight away as confident, transparent and very detailed. The bass end is also surprisingly well controlled and solid for such a small monitor, with no hint of boxiness unless you get silly with the levels. Equally gratifying is that although the high end is very detailed, it isn't overly aggressive as can be the case with some titanium tweeters, though it still has that characteristically 'forward' character exhibited by metal tweeters. Overall, the sound seems to be a little on the bright sound of neutral, but not by much.

In a monitoring situation, the sweet spot is very wide and the stereo imaging is good, even if your room acoustics and/or mounting position are less than ideal. The open, revealing sound of the monitors makes it very easy to hear right into a mix, and though I don't feel the high end is quite as smooth as you'd expect from a quality soft‑dome tweeter, it is probably more in line with what most users expect from a studio monitor and certainly good for a monitor in this price range.

On balance, the Indigo Threes perform very well, especially considering that they cost only £500 per pair — they're well suited both to main monitoring in small studios and to nearfield monitoring in larger facilities. The fact that they present a reasonably benign load to the power amplifier means you don't need anything too powerful or too esoteric to get good results, and the low magnetic field leakage ensures you won't suffer from running colours if you have to work near to video monitors. There is tough competition in this price range from the likes of Tannoy, Spirit, HHB/Harbeth, AVI and so on, but I think it's fair to say that the Indigo Three monitors deserve a place on anybody's shortlist.

This is a genuinely useful studio monitor that strikes a good balance between tonal neutrality and the need to reveal detail. It's also beautifully made and nicely styled.