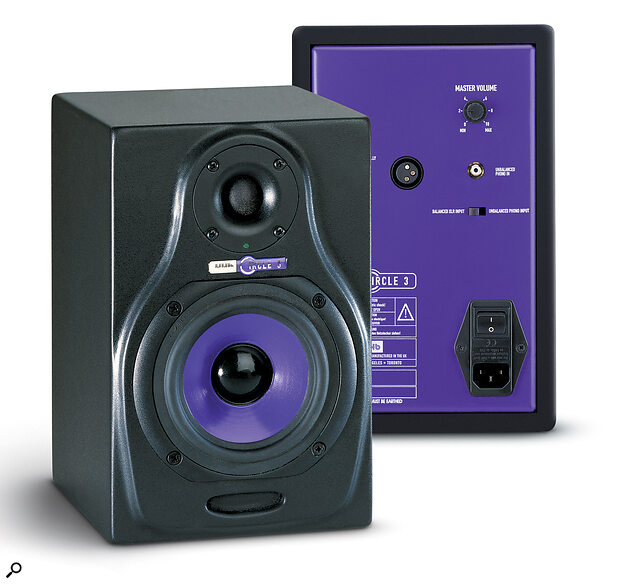 Achieving the right balance between quality, size, practicality and price is no easy task, but HHB have hit the nail squarely on the head with their Circle 3 Active monitors. Hugh Robjohns takes them for a spin.

HHB's Circle range of speakers — the 5s, 3s and new Circle 1 subwoofer — have acquired quite a following in the relatively short time they have been available. Designed by Alan Shaw (of Harbeth), these speakers all share a common acoustic presentation and style which could be described as 'the best of British'. The initial auditioning of either of these nearfields might lead you to think they sound a little unimpressive, or at least understated, in that typical British way. But spend just a few hours working with them in a real mix situation, and you will soon realise that they are not only very cost‑effective, but extremely good to boot! The 'Circle sound' can be characterised by adjectives such as unfatiguing, neutral and detailed — some of the most important qualities of a true monitor loudspeaker.

The active version of the Circle 3, the subject of this short review, has been designed as a high‑quality desktop monitor intended for the kind of smaller applications for which the Circle 5s are inappropriate. The model obviously has a great deal in common with its passive version, as well as its bigger sibling, and the basic cabinet and drive units are virtually identical to those of the passive Circle 3. However, the active input, crossover and amplifier section derives, in part, from that of the Circle 5. Both of these monitors have been reviewed in the pages of Sound On Sound relatively recently: the Circle 5 Active in January of this year, and the passive version of the Circle 3 in June.

The diminutive Circle 3 Active measures 270mm high by 175mm wide — the same as its passive version. However, it is 23mm deeper (at 220mm) in order to house the necessary electronics, which also add 1.3kg to the overall weight, bringing it up to 5kg per box. The cabinet is a sealed infinite‑baffle design and the internal volume remains unchanged between the two versions, the electronics being accommodated in a separate enclosure at the rear. Both drive units are identical to those of the passive version, with a 110mm (4.5‑inch) bass/mid driver and a 25mm soft‑dome tweeter. The Vifa bass unit is a customised design, with a 25mm voice coil acting on its paper cone, mounted in a non‑resonant suspension coupling (NRSC) and acoustically dead chassis — all of which helps to provide a well‑damped impulse response. The tweeter is an Audax soft‑dome unit with ferrofluid cooling of its 25mm voice coil and a neodymium magnet for high efficiency. Both drive units are magnetically compensated, to ensure they don't disturb the colour balance of computer monitors and TV screens, or cause moving‑coil meters in mixers to misread.

The specifications give the frequency response as 70Hz to 20kHz (‑3dB points) with a crossover point of 3.5kHz, courtesy of Sallen and Key filter topologies. One of the main improvements over the passive version is that the active crossover circuitry has allowed better time‑alignment to be achieved between the tweeter and bass/mid driver. An all‑pass filter stage included in the tweeter circuit provides the tiny amount of delay required to perfect the crossover integration, with the end result that the speaker benefits from a very wide vertical listening arc. What this means in practice is that a balanced sound can be heard almost wherever the speaker is positioned relative to the listener, and that it also provides a very wide and sharp stereo image.

The Circle 3 Active contains two amplifier modules, a 60W section for the bass/mid driver and a 30W one for the tweeter. No limiters or other protection devices are installed, as the amplifier and drive units are ideally matched in their power handling, and a very clever anti‑thump circuit protects the system during power up and down. The amplifier stages use conventional construction techniques, but the input buffering and crossover circuits have been manufactured with surface‑mount devices — a first in the Circle lineup — simply in order to cram all the necessary components into such a confined space.

The rear panel of the Circle 3 Active acts as a heat sink for the amplifier modules, and is painted in HHB's distinctive shade of purple, the same as the cone of the bass/mid driver. At the bottom a large rocker switch is mounted in an integral unit which also accommodates the IEC mains inlet and fuse holder, whilst the audio connections are provided towards the top of the unit. A green LED in the tweeter bezel indicates when the speaker is turned on.

A chunky slide switch selects either an electronically balanced female XLR connector or an unbalanced phono socket as the input source. In both cases, the signal earth is fully floating from the mains and chassis earth to minimise the likelihood of ground loops. The only operational control is rotary volume knob on the rear panel (scaled from 0 to 10) — there is no provision for room matching or any kind of tonal correction, so the sound you hear is the one the monitors were designed to provide.

I really liked the passive Circle 3s when I reviewed them a while back — they are not the ideal solution for every monitoring situation, obviously, but when something very compact is required, there are few other speakers of comparable performance. However, I am confident that the Circle 3 Active is even better, and the subtle enhancements Shaw has been able to make to the crossover have brought surprisingly big benefits to the quality.

I used the 3s on a wide variety of work, but mainly for editing with a colleague's computer workstation, where they were absolutely ideal. The high standard of sound quality and the wide listening axis (both vertically and horizontally) made working very easy — there was no tiny 'sweet spot' to stay within, and the sound was very comfortable to listen to for extended periods. The workstation was normally set up with classic BBC LS3/5As — very good nearfield monitors in their day — but the Circle 3s soon revealed just how coloured this popular monitor really was. The only difficulty I encountered was that the wide vertical dispersion meant reflections from any close surfaces below the speaker could affect the sound quite dramatically. Placing the speakers in the middle of a table either side of a computer screen was not a good idea, and raising them a foot or so improved things considerably. I think these speakers should, ideally, be mounted on stands (or against the wall) well away from reflective surfaces.

It has to be said that the Circle 3 Active faces some very stiff competition indeed from the likes of Genelec, Spirit and Tannoy to name just a few, and I just happened to have a similar‑sized miniature monitor for review from another very well‑known manufacturer at the same time as these HHBs. Both had the same undeniable convenience that all active speakers share, both were well shielded and caused no problems with computer monitors, both were capable of generating more than sufficient monitoring levels in appropriate situations, and both had a reasonable frequency range given the size of their cabinets. Both can also be used with optional purpose‑designed subwoofers to extend the frequency range of the system.

However, in this head‑to‑head test the Circle 3 was definitely easier to live with (ignoring its purpleness) after a long session and, once I had become accustomed to it, I was aware of a great deal of quite subtle information in the audio signal. The stereo width and depth seemed more clearly defined and focused, the mid‑range was significantly more neutral and open. The whole presentation was just much more natural and easier to listen to. Don't get the wrong idea — in the grand scheme of things, these Circles are still a long way off being the perfect professional monitoring tool — but for such a small, competitively priced box and in comparison with some of their most respected peers, the Circle 3 Actives really do take some beating!

A miniature two‑way active speaker that takes some beating. Classic British sound quality with the emphasis on a clean detailed and neutral mid‑range. Good imaging and easy on the ears even after extended sessions.

Field Music: Building A Track In The Studio
3 weeks 2 days ago.