Q. What's the difference between audio and data CD-Rs?

What is the difference between audio and data CD-Rs? Surely digital audio is just data — a string of ones and zeroes in an encoded file. So why do we need different CDs for audio? 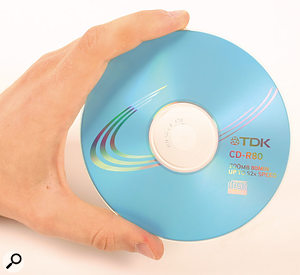 SOS Technical Editor Hugh Robjohns: There are two fundamental types of CD-R blanks: the standard type and the Consumer Digital Audio type. The latter is intended for consumer stand-alone CD recorders which require a special code within the blank 'groove' of the CD-R disc before they will work properly. These discs are slightly more expensive as there is a 'copyright' levy raised from sales of these discs.

Going back to the standard types of CD-R blank, you may still find some types being marked as 'optimised for audio applications'. These are generally higher-quality discs, and usually designed for use in relatively slow burners (below 24x speed).

The point is that when recording audio on a CD-R disc with the intention of playing it back afterwards on a consumer CD player, the data has to conform with the 'Red Book' standard, which takes its name from the 1980 document issued by Sony and Philips detailing their new medium's physical and technical specifications, which, it's said, was bound in a red cover. The Red Book standard has relatively simple (by modern computer standards) error-correction facilities. Hence, a reliable recording really does need good quality blanks to ensure the inherent physical error rate of the disc itself is very low. The faster the recording speed, the more likely errors in the recording process become too. This is another reason why CD-Rs optimised for audio will not support write speeds above 24x.

In contrast, a computer file, such as an audio WAV file, is protected by much more sophisticated error-correction facilities. As a result, these kinds of data file will generally survive better on poorer-quality CD-R blanks.