I'm looking for a decent stand-alone Leslie-style rotary speaker effect, mainly for use with keyboards, but also for guitars. Can you offer any suggestions? 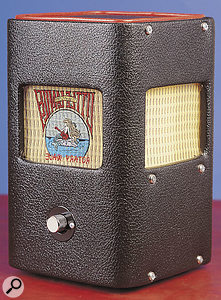 The Little Lanelei is a miniature, single-cone rotary speaker designed for recording.SOS Staff Writer David Greeves replies: The Leslie rotary speaker uses relatively simple mechanical principles to produce a sound that is very hard to reproduce accurately by other means. Sound from the treble driver is dispersed through a pair of horns, pointing out in opposite directions from the central pivot point around which they rotate (although one of the horns is actually a dummy, included to balance the rotating pair). The bass driver, meanwhile, points straight down at a rotating drum which is scooped out on one side to allow the sound to escape. As these two sound sources spin around, they produce not only a tremolo effect (amplitude modulation) but also vibrato (frequency modulation) and phasing thanks to the Doppler effect, the same principle which explains why the pitch of an ambulance siren or car horn seems to rise and then fall in pitch as it speeds towards you and then away. Add to this the fact that the bass rotor is uni-directional and the treble horns are bi-directional, the differing acceleration and deceleration speeds of the two rotors, the build of the Leslie cabinet itself and the particular grungey overdrive that a vintage Hammond/Leslie combination is capable of, and you start to see why 'that sound' is so difficult to reproduce. That's not to say that there aren't some excellent hardware rotary speaker effects out there, and any of the following would be worth a try to see if they meet the needs of your setup.

Dunlop (www.jimdunlop.com) produce a couple of rotary effects. The Rotovibe pedal is mainly intended for guitarists who are after a Jimi Hendrix-style Leslie effect. It looks like a wah-wah pedal, with a single knob on the side to alter modulation depth while the expression pedal controls mod speed, a useful feature for live performance. Dunlop's UV1 Uni-Vibe offers a broader range of sounds, featuring tremolo and chorus modes with adjustable speed, volume and intensity. The optional UV1FC foot controller allows remote control of mod speed and bypass switching.

Dunlop's Uni-Vibe takes its name from the original Uni-Vibe produced by Roger Mayer, an effect used extensively by Hendrix, Robin Trower and many others. The original model is no longer in production, but Roger Mayer (www.roger-mayer.co.uk) produce an updated version, called the Voodoo-Vibe. This Class-A, all-analogue guitar effect features chorus, vibrato and tremolo modes and controls for modulation speed and range (there are three sine-wave and three triangle-wave speed ranges), intensity, symmetry and bias. It also supports an external speed control pedal. Though its earliest ancestor was originally developed as a rotary effect for the organ, the Voodoo-Vibe can produce a range of experimental and psychedelic effects that stretch far beyond Leslie emulation. You might even be able to get away with using it on vocals as well as guitars and keys. 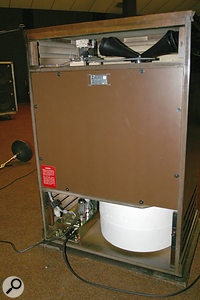 A rear view of the Leslie 122XB cabinet, with panels removed to reveal the treble horns (top) and foam bass rotor (bottom) responsible for the distinctive Leslie sound.Hughes & Kettner produce a well-specified rotary effect pedal called the Rotosphere (see www.hughes-and-kettner.com), which features stereo inputs and outputs and high-voltage valve circuitry for tube drive. Authenticity is high on the agenda, with two-speed operation (the 'slow' and 'fast' speeds can be set), independent acceleration and deceleration settings for the (simulated) treble and bass rotors and an emulation of the breaker circuit, a popular modification which allows the player to disengage the motor, allowing the rotors to slowly come to a stop. When you take your foot off the breaker switch, the rotors slowly spin back up to speed. The Rotosphere is designed for both guitar and organ.

Another such effect is the Spin II from Italian organ manufacturers Voce (www.voceinc.com). This stompbox, coloured an eye-catching orange, is a stand-alone implementation of the rotary simulator from Voce's keyboards. The input can be switched to suit guitar or line-level sources and the stereo output can be turned down to feed a guitar amp. There are bypass and fast/slow footswitches and controls for the fast and slow rotor rates and rotor acceleration.

If none of these pedals will really give you the sound you need, and you've plenty of room to spare in your studio, perhaps you should consider buying a second-hand Leslie cab — I saw a solid-state Leslie 760 advertised for £150 recently, which is less than the list price of some of the effects I've mentioned above. Be aware, though, that Leslies of different vintages use completely different connection and power standards, so even if you have a Hammond organ, or a modern Hammond-modelling keyboard with a Leslie output (like Roland's VK8), it's not the case that any old Leslie will do. If you can get hold of a Leslie Combo Preamp (and I wish you luck), you'll be able to put just about anything through a Leslie cab. This handy chrome wedge-shaped pedal features bypass, fast/slow and breaker switches, provides power to the Leslie's motors and offers a quarter-inch jack input. Once again though, you'll need to match the right model of Leslie Combo Preamp with the right model of Leslie cabinet. Trek II Products in the USA (www.trekii.com) produce a modern equivalent. There's a wealth of information on Leslie maintenance, modification, and compatibility at web sites like www.theatreorgans.com and www.dairiki.com/hammondwiki where you'll find links to many other places of interest on the Net.

A final option to consider is the Little Lanilei Rotary Wave speaker (www.songworks.com). This stylish rotary speaker, available in 65W/10-inch and 35W/6.5-inch versions, features a single rotor and a speed control. While you couldn't expect it to reproduce the sound of a Leslie at full blast, it's also much smaller and lighter, and you can plug an external amplifier into it via quarter-inch jack, making it an easy way to add a subtle rotary effect to guitars, keyboards, vocals and just about anything else.