Q. Should I believe my monitors, my hi-fi or my headphones? 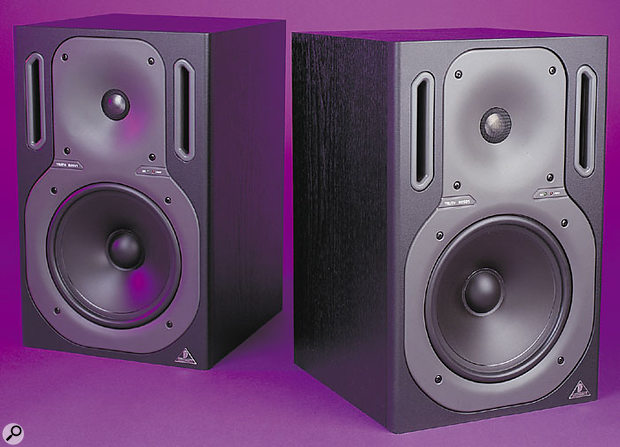 When using small monitors like Behringer's Truth 2031s for mixing, it's worth comparing the results on domestic hi-fi speakers and headphones.

I'm currently mixing a full funk band recording and have borrowed a pair of Behringer Truth B2031 monitors to do it. Everything sounds great to me, until I switch over to my Technics hi-fi to check it and it loses all bass definition and sounds muddy. When I check it again using a pair of Beyer DT100 headphones, things sound disjointed, with some things sounding miles away and others really close. Is this my lack of experience in mixing, or is there something I'm missing? How can I find a compromise?

SOS Reviews Editor Mike Senior replies: I've used Behringer Truths before, and I've found that the port sounds quite resonant (this is done to achieve a flatter frequency response, but at the cost of time-domain problems), which makes it difficult to judge the bass and lower mid-range with any great accuracy. For example, I've found that the difference between the mixes I've done on the Behringers and those I've done with a Blue Sky Pro Desk system (which has no ports at all) has been fairly dramatic. Admittedly, there's a price differential here, so it's not quite a fair comparison. However, bear in mind that the famous Yamaha NS10s and Auratones were both unported. But as with all monitors, it's essential to listen to lots of commercially produced CDs that you are familiar with played through them so that you can begin to get used to the particular way they emphasise and de-emphasise certain frequencies.

The best advice I can give you would be to use more than one pair of speakers when mixing. I've been getting results which translate pretty well on most systems by alternating constantly between the Blue Skys and a pair of £30 multimedia speakers (as well as checking occasionally on a good pair of Sony headphones). Although you'll never get a completely accurate representation of the sound from any single system (not at this price level, anyway), the constant switching between systems really helps give you a good overall idea of the way the mix is working. If I had the space to set up even more sets of speakers I would, as moving to a dual-system monitoring setup has made a dramatic improvement to my results. I've heard it said that Steve Power (of Robbie Williams fame) uses as many as half-a-dozen monitoring systems while mixing.

Another thing to think about when mixing is the acoustic environment that you and your monitors are in; this is the most common issue we encounter on home studio visits for our Studio SOS features. Just a few panels of acoustic foam or a couple of bass traps can make a world of difference. I can't actually fix any acoustic treatment permanently into my home setup (my wife wouldn't let me!), but I still insist on putting up foam-covered boards while I'm mixing, because it makes such a difference to the usability of the system.

As to the 'disjointed' sound you hear from your headphones, the problem probably has to do with your use of effects. If things seem too far away, then you're likely to be using too much reverb or delay, or just the wrong patch. If they seem too close, then add in a bit more of these effects. It could also be that you're compressing too little or too much. Only a bit of experimentation can really help out here, but check out some of SOS's past articles on reverb and delay for some tips. It sounds like you might also be going overboard with panning to make up for mix problems. I've always considered it a bit dangerous to rely on panning to separate your sounds in the mix, because of the fact that so few real-world listening systems actually exhibit stereo performance — even most apparently stereo systems often don't deliver stereo to the listener because of the positioning of the speakers or the listener. If it's taking panning to sort out a mix problem, I usually try to reassess the arrangement instead. Something just has to go, or be filtered or something.

When approaching a mix, it's often a good idea to start by mixing the most important musical element of your track first. Often, it's the lead vocal, but it could equally be the drums in dance styles, for example. If, for example, your lead vocal and electric piano are the most important instruments in a track, then it makes sense to process and mix everything else to fit with them, rather than compromising the lead instruments' sound to fit them around all the secondary stuff. The best mixes I've done have closely adhered to this principle, and my biggest mixing mistakes tend to occur when I stray from it. I also try to start mixing with the climax of the song first (the final choruses in a pop song, for example), so that I can pace the rest of the song and keep it from getting too big too early.