Q. How do you increase perceived stereo width using phase?

I found an SOS article on stereo mixing from October 2000 on your web site which explains how you can increase perceived stereo width by using extra mixer channels out of phase. However, the diagram is missing. Can you explain how it's done? 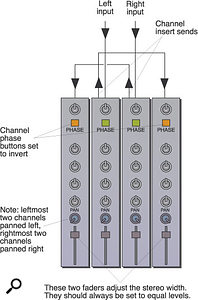 Editor In Chief Paul White replies: Diagrams for older articles aren't published on the web site, but we've reprinted the one you're referring to below. This is a simple and effective technique for widening the stereo image, provided you have a couple of spare mixer channels.

First, you need to set up your mixer so that both the left and right stereo signals feed two mixer channels each. You can either do this using a couple of 'Y' leads to split the signals, or by using channel insert sends to feed the secondary left and right channels (as shown in the diagram). Ideally, the mixer should have channel phase-reverse buttons, though if you have balanced line inputs and no phase buttons, you can instead reverse the phase by switching the hot and cold cores on your 'Y' cables so that one of the left inputs and one of the right inputs is reversed.

To set up the effect, pan the main left input hard left and the main right input hard right as normal. Next, pan the secondary left input hard right, but switch in phase invert on its mixer channel or swap the hot and cold cores. Similarly, take the other right input, pan it hard left and invert its phase. In the diagram, the secondary, out of phase left and right channels are placed on opposite sides to the main left and right channels, so that, from left to right, the channels are R2, L, R and L2.

Start with the faders down on the two out-of-phase, 'wrong-side' panned signals and then gradually bring them up to add stereo width. If you go too far, you'll notice the centre signals becoming weaker and a hole appearing in the centre of the stereo field, so don't overdo it.