With digital and analogue inputs, these small speakers from newcomers Infrasonic promise a lot for the money. Can they outperform their budget price tag? 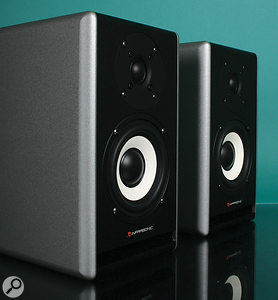 Korean company Infrasonic are a new name on the scene, and the first of their products we've received for review is the Blow 4D two‑way active nearfield monitor.

Combining a four‑inch woofer with a three‑quarter‑inch silk‑dome tweeter in a smart silver‑sided, ported MDF cabinet, this is a true-active design crossing over at 3.5kHz and delivering 25W and 30W to the HF and LF drivers respectively. Round the back of the box are balanced XLR and TRS jack inputs, a level control, and three slide‑switches to tailor the frequency response: you can adjust the high tonality to taste with a ±2dB shelf, reduce the low‑end to compensate for half‑ and quarter‑space setup, and high‑pass filter at 80Hz or 100Hz to accommodate an additional subwoofer of your choice. A digital I/O board (which appears to be a separate module, but is fitted as standard in the UK) adds on AES and coaxial S/PDIF inputs, as well as a digital loop‑through socket to daisy-chain the stereo digital signal from the first to the second speaker in a stereo setup. The built‑in D‑A conversion will accept up to 192kHz/24‑bit signals, as well as all the usual sample rates below that.

The first thing that I noticed on powering up these little speakers was how smooth they sounded overall – certainly not the kind of sound expect from small active speakers in this price range, which tend to try to part your hair with the brashness of their highs. Silk‑dome tweeters often take the edges off the high end, but in combination with this speaker's commendably restrained overall frequency response (73Hz‑20kHz ±1.5dB), the raw sound feels almost slightly muffled. Even adding the extra 2dB of high end doesn't exactly make things sound bright, so this is definitely a speaker which will suit those who prefer a smoother tone.

Other than this, I felt that the overall tonality of the speaker was pretty well‑judged, with not too much of the low‑end port hype that so often afflicts budget models. The tonality of a range of references came across pretty believably, and it proved possible for some reasonable balance judgements to be made in a mixing situation. As you'd expect in a ported speaker of this size, the bass levels drop away pretty sharply as you head past the port frequency (just under 40Hz) and some critical bass/kick processing decisions involve a bit of guesswork, but overall, this aspect of the Blow 4Ds' design feels rather above par for its area of the market. That said, the levels of LF distortion feel a little on the high side, adding a certain amount of low-mid‑range shadow to any sub‑bass frequencies otherwise lurking beneath the woofer's reach. 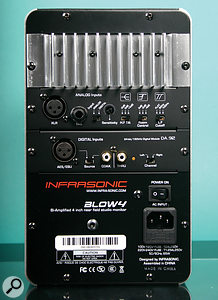 The rear panel of the Blow4D, which includes both digital and analogue inputs.Because of the sensible (if cosy) overall tonality, the strengths of this speaker hit you straight away, while the weaknesses take a little longer to make themselves apparent. Foremost amongst these is that 'smooth' here has a less desirable flipside, namely a lack of detail. Sounds tend to blend together of their own accord, making it more difficult to pick out individual instruments in a section of orchestral violins, or the separate layers of a multitracked guitar or backing‑vocal panorama. In a similar way, dry sounds tend to merge with their reverbs (whether natural or artificial), concealing the acoustic signature and rendering the stereo image strangely depthless, despite fairly representative left‑right placement. There's also a lack of speed to the Blow 4Ds' performance, which presents the audio almost along the lines of a slightly soft‑focus photo: normally lethal transients become rather child‑friendly, while detail and intelligibility within intense rhythmic productions inevitably suffers to some degree.

You can get a respectable level out of these boxes before the audio starts breaking up, and their tonality ensures that they never become harsh, which means that they can provide fatigue‑free listening for long periods if required. Although the little illuminated logo under the woofer lights up red while the built‑in amplifier start‑up protection circuitry is in action, it's a shame that this red light can't also light up as an overload warning, as this would make it easier to run these speakers at higher volumes to maximise the audibility of HF information.

For the price, this new Infrasonic speaker provides a good balance of qualities. It's not without some of the usual vices of its market peers, but the manufacturers have made the wise decision to go easy on the theatrics to try to deliver a reasonable amount of useful mix insight within the budget constraints. I think that those working on commercial pop/rock material will probably prefer more high‑frequency speed and definition via a harder tweeter, but will have to resign themselves to a more fatiguing sound. Dance and hip‑hop musicians will doubtless also prefer more extended and powerful low end, but will likely sacrifice real mixing power because of the side‑effects of pushing the low‑end design variables too far. For those working with more sedate acoustic music styles where the low end doesn't exactly need to journey to the centre of the earth, the Blow 4Ds offer an attractive silky sound even at a fair volume, and give you enough usable mix information that you should be able to make a lot of respectable balancing decisions.

This area of the market is packed with multimedia speakers designed to deliver arresting first impressions, but few of these are likely to match the more refined tonality and usability of the Blow 4Ds. More serious competition in terms of studio use is likely to come from the entry‑level offerings from more established names in studio monitoring, especially if you're after a more pop/rock‑oriented sound: units like the KRK RP5 G2, Mackie MR5, or Alesis M1 Active 520. If you're working in dance or hip‑hop, then you might want to try something with a subwoofer instead, and although such systems can be problematic at this kind of price, Blue Sky's Exo 2.1 system would certainly be worth a look given Paul White's favourable review back in SOS March 2008.

A nice‑sounding speaker which will suit those working in more acoustic music styles. While I've yet to come across a speaker in this price range which can handle the demands of heavy‑duty mixing, the Blow4 gives you enough information that you should be able to achieve a pretty good basic balance job in a lot of real‑world situations.