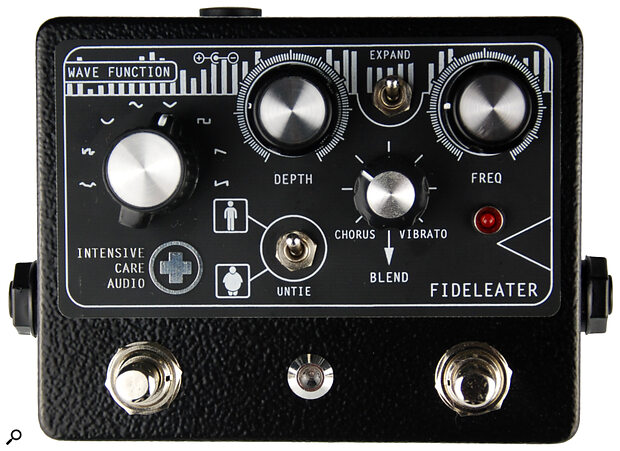 Despite being a pedal obsessive, I’ve felt until recently that my selection of chorus pedals has been slightly lacklustre. My Boss CE‑2 and MXR Analog Chorus have always done the job nicely enough, but it wasn’t until I tried Intensive Care Audio’s latest concoction that I realised what I’d been missing in the modulation department. Fideleater is a lo‑fi chorus, vibrato and delay pedal. While it offers the user only six controls, they can be used to access a huge palette of sounds. These include the traditional sounds we’re all used to, but the Fideleater truly shines when you really dig in and experiment.

My first reaction upon opening the box was how beautifully designed it is. Featuring an elegant black case with minimal white print and synth‑style knobs, it is right up my street and it blended into my board nicely. You’ll find a bright but not distracting LED that indicates whether or not the pedal is active and a standard active/bypass footswitch to the left. When you play a modulation pedal you expect to find several controls, and the Fideleater has Depth and Freq as you would imagine. The Depth knob controls the depth of the LFO and setting it conservatively will present more traditional results whereas rotating it clockwise past the 12 o’clock position will start to introduce strange, glitchy textures. The range of Depth in this pedal is a huge positive for me, as it definitely pushes past the boundaries of other modulation pedals. Freq (Frequency) is used to set the frequency (ie. speed) of the LFO. The right footswitch is a Tap Tempo control for Freq, very useful for getting your warbles in time or making snap changes during a performance.

On the left‑hand side of the pedal is a large rotary knob labelled Wave Function. This is used to select one of eight waveforms (Random Slopes, Random Steps, Sweep, Sine, Triangle, Square, Ramp Down and Ramp Up) for the LFO. The Chorus/Vibrato Blend control sets the amount of dry signal that’s mixed with your processed signal. When set fully anti‑clockwise the pedal operates as a chorus, but turning it clockwise gradually removes the dry signal until, eventually, it is fully dimmed and you are left with the modulated signal alone — creating a vibrato effect. When set all the way to Vibrato, you’ll inevitably experience a tiny amount of latency, but if that bothers you, it’s easily remedied by dialling in a small amount of dry signal, which I found made things feel more natural. When the pedal is used as a delay, this similarly acts as a wet/dry control.

It could have been called the Liftoff Switch, as that’s the feeling it gives me when I hear it in action!

Above the Blend control is the Expand switch, which opens a feedback path within the circuit and adds a lot of depth to the sound. It could have been called the Liftoff Switch, as that’s the feeling it gives me when I hear it in action! It adds a gorgeous warble that injects a lot of movement into the effect. With the Depth set subtly, it is almost like a slapback delay, but when it’s pushed all the way up things start to take off. The Untie switch is used to extend the delay time, creating an effect more like a delay than a chorus. Modulation is intensified in this mode and when combined with the Expand switch you are faced with a portal into another world of warbly, glitchy beauty.

Those seeking a traditional chorus may worry that this pedal is ‘too much’ but it needn’t be: I found the Fideleater to be highly inspirational to play whether I had it dialled in conservatively or was fully exploring its weirder side.