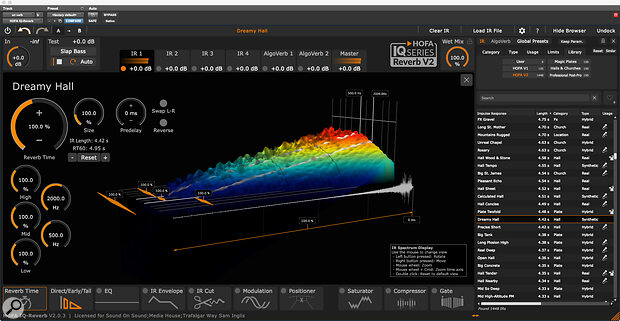 If you’re looking for one reverb to rule them all, HOFA’s massively comprehensive plug‑in ticks all the boxes.

HOFA are a German brand with a number of strands to their business. HOFA‑College is an online audio academy with an extensive and well‑established curriculum, offering everything from short courses to Diploma and Bachelor programmes. There is also a HOFA recording and mastering studio in the Rhine Valley, a HOFA business that manufactures acoustic treatment and, last but not least, HOFA‑Plugins.

I’m sure many of us cherish our ‘secret weapons’: hardware or software that sounds very special but flies under the radar. HOFA’s IQ‑Series Reverb is one of mine. It was launched in 2014 in the vanguard of a new generation of plug‑ins combining the realism of convolution with the flexibility of algorithmic reverb. Offering an extremely usable IR library and a number of innovative features, it perhaps didn’t get the attention it deserved, but it’s been a staple of my mixes ever since.

Seven years on, HOFA have launched a massively comprehensive update. IQ‑Series Reverb V2 retains all the features of the original, including the option to stretch and squash impulse responses, modulate them, divide them into early reflections and tail portions, cut or chop them for gated effects, and so on. It also retains the Positioner, a simple but effective 2D panner that allows the source to be located at a specific point within the recreated space. And on top of these sturdy foundations, it builds a towering edifice of new reverb‑creation features.

IQ‑Series Reverb V2 is installed and authorised using a separate HOFA Plug‑ins Manager utility. Once you’ve been through this pain‑free process, you’ll see a user interface broadly similar to that of the original. The visual highlight is still a neat 3D waterfall plot of the selected impulse response, though this now shines forth in rainbow hues. It can be spun around with the mouse for visual effect, or you can modify the IR by clicking and dragging at various points on the axes.

As before, the right‑hand side of the GUI is devoted to a preset browser, but this has now been souped up in a number of ways. Most significantly, the browser pane can now be split off and floated independently of the main window; this is important because otherwise there can be a lot of scrolling involved in finding what you want. Resizing the main plug‑in window doesn’t change the width of the browser pane, but once floated, the latter can be enlarged to expose more parameters, and retains its new width once re‑docked. 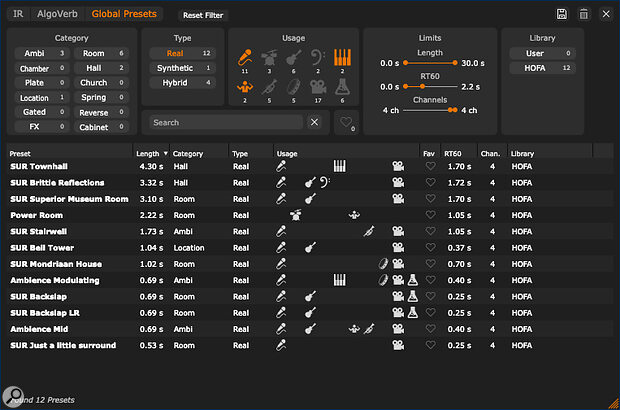 The browser can be undocked from the main window and resized. It offers numerous facilities for tracking down the IR or preset you need.

As before, there are two levels of preset. Global Presets store and recall an entire IQ‑Series Reverb configuration, but it’s also possible to load impulse responses and other core reverb parameters independently. As before, each preset is categorised not only by name and reverb time, but on the type of reverb and its appropriateness for different sources. However, the tools for narrowing down a preset search have been seriously beefed up in version 2 so if, for example, you know you’re looking for a true‑stereo hall reverb with a short decay time, it’s a matter of moments to set the appropriate filters.

Functionally, the most fundamental development in version 2 is that Global Presets need no longer be based only on a single impulse response. In fact, they don’t even need to be based on an IR at all. Each instance of IQ‑Series Reverb V2 contains no fewer than six reverb ‘engines’, four of which are IR players and two are algorithmic reverb generators. Their contributions can be balanced in a Master mixer page, which also offers shortcuts for key parameters and global Time Scale and pre‑delay settings, as well as optional Saturator, Compressor, Gate, Ducker and EQ modules. 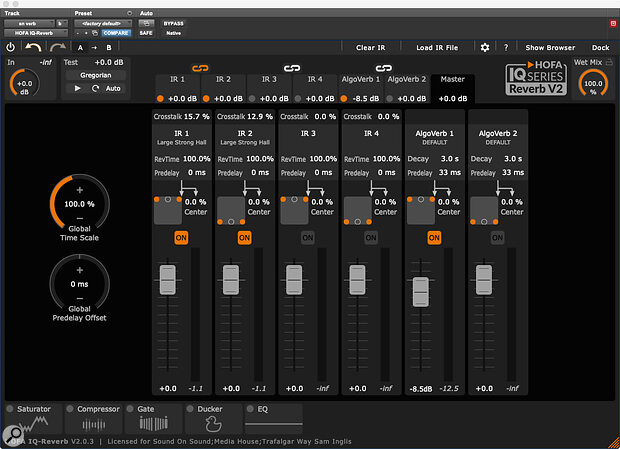 The Master page is where the contributions of the four IR and two algorithmic reverb engines are combined. In surround configurations adjacent engines can be linked, and each has a quad panner. Here, IR1 is feeding the front L/R speakers and IR2 the rear.

Four of these five modules are also available independently for each of the four IR engines. Here, they’re joined by equally new IR EQ and Envelope options, as well as the existing Positioner, IR Cut, Modulation and three‑band Reverb Time adjuster. Together, these add up to a serious amount of editability, but the modular format means you’re not overwhelmed by choice and can easily ignore anything you don’t want to mess with. Most unusual among the new additions is the Saturator: I’ve encountered a similar idea before on Overloud’s ReMatrix, and although it’s not something you’d want to use in every mix, it can be an effective way of enriching and thickening a reverb tail. Signal flows serially through the Saturator, Compressor and Gate modules, and they can be reordered by dragging and dropping.

Mention should also be made of the neat Test pane, a collection of short samples that can be triggered directly within the plug‑in window. Many more samples are available in version 2, making it an even more effective way of auditioning presets without having to stop and start playback.

Finally, although convolution remains the heart of IQ‑Series Reverb, the two new AlgoVerb engines are much more than an afterthought or add‑on. Each offers the same choice of 10 reverb algorithms, with familiar options such as Plate, Chamber and Cathedral rubbing shoulders with the intriguing Deep, Huge and Cheap. A simple one‑page graphical editing view presents all the usual parameters such as pre‑delay, diffusion, decay time, modulation depth and rate, high‑ and low‑pass filter settings and a deceptively simple three‑band Decay Time Equaliser, mirroring the equivalent functionality in the IRs’ Reverb Time module. Here, too, you’ll find a gate, as well as a Vintage mode which operates at a low sample rate for authentic ’80s graininess. 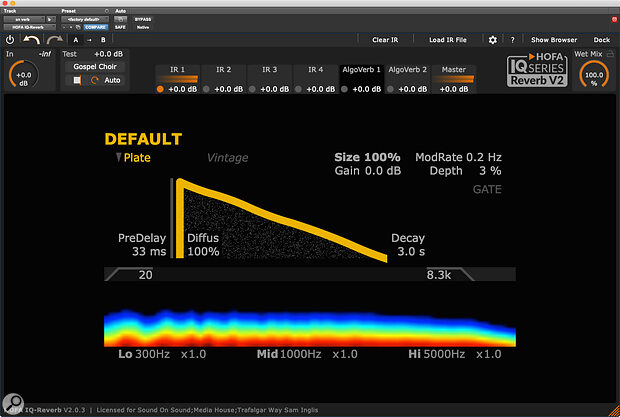 The algorithmic engine is simple but surprisingly versatile.

One reason for the proliferation of reverb ‘engines’ in IQ‑Series Reverb V2 is that the plug‑in now supports a variety of surround formats. There are no surround IRs included as such, but in surround mode, each engine’s output in the Master mixer gets a quad panner. Adjacent engines can also be linked, so you could for instance use the same true‑stereo IR in engines 1 and 2 and generate a reasonable faux‑surround output.

Even as a seasoned user of IQ‑Reverb, I was a bit daunted the first time I was confronted with the v2 GUI. What was already a very comprehensive plug‑in has now become almost obsessively so! After a few minutes’ exploration, however, I began to appreciate that all of this power has actually been presented in a very manageable way. It’s easy to see at a glance which engines within a Global Preset are active, and which processing modules within an IR engine are in use. And once you spot that the browser can be undocked and treated as a separate window, you realise how well‑organised everything is; HOFA have been meticulous about categorising everything and incorporating metadata.

This is absolutely necessary, because even if you don’t add any of the optional IR libraries (see box), the core v2 library is more than 10 times the size of v1’s, containing a total of 1448 impulse responses. At the short end of the scale, these include a large number of loudspeaker cabinet IRs for use with guitar and bass amp simulators, and a massive array of ambiences, special effects treatments, small spaces for post‑production and so on. Above the 1‑second mark we begin to encounter more recording rooms, chambers, halls and plates, while the top end of the scale offers epic 10‑second‑plus churches, cathedrals and artificial creations.

One thing that definitely sets IQ‑Series Reverb V2 apart from most convolution reverbs is the sonic diversity on offer.

The general quality is excellent, and one thing that definitely sets IQ‑Series Reverb V2 apart from most convolution reverbs is the sonic diversity on offer. If you want realism, that’s available, but what caught my ear above all was the number of experimental, out‑there, unnatural and highly coloured IRs. A particular highlight is the collection of spring reverb impulses, which encompasses a really surprising range of textures and effects extending far beyond the clichéd surf guitar ‘boing’. I didn’t always find the names particularly helpful or descriptive, but equally, I have no idea how you would go about generating helpful and descriptive names for such a large collection of IRs!

I can’t imagine ever needing to blend four simultaneous IRs — at least, not in stereo — but the ability to combine two certainly has its uses. For example, mixing a short, wide ambience patch with a longer, narrower plate or spring can deliver a very effective vocal treatment. You could even use the Direct/Early/Tail module to mute different sections of the IRs and thus combine one set of early reflections with late reflections taken from a different IR. And while you probably wouldn’t buy this plug‑in just to use the algorithmic engine, it actually sounds very decent and offers a surprising amount of flexibility from within a very simple interface. The facilities on offer for editing IRs are equally lavish, but my favourite v2 feature is the global Ducker. Ducking lets you ‘push away’ the reverb slightly while the source sound is playing, then have it swell up in the gaps. It’s often just the ticket for lead vocals or instrumental solos, but can be hard to set up accurately in other plug‑ins. HOFA’s Ducker just seems to work.

As I’m sure this review has made clear, a staggering amount of work has gone into creating IQ‑Series Reverb V2 and its IR libraries. What was my secret weapon for creative convolution‑based reverb treatments has now become an entire armoury, and I don’t expect it to remain secret for long!

One of the headline features of IQ‑Series Reverb V2 is a massively enhanced factory library with almost 1500 impulse responses. It’s also possible to load your own audio files to use as IRs, and HOFA sell several expansion packs. Four are currently available, including the intriguing Binaural Spaces which was just released at the time of going to press.

Professional Post‑Pro is, as you’d expect, a collection of interiors chosen more for their ability to match a striking visual location than for their potential beauty in a musical context. However, that’s not to say they have no musical application. The range of sounds on offer is extremely diverse and several of the IRs here quickly made it onto my ‘favourites’ list for sung vocals, snare drums and other sources.

Magic Plates, meanwhile, interprets the ‘plate reverb’ theme very broadly. There are some straightforward captures of real plates, but in general, HOFA seem to have used the term as a shorthand for all kinds of dense, coloured, heavily treated synthetic and electro‑mechanical reverb. This is already a strength of the factory library, and Magic Plates takes it several steps further; there are a lot of IRs here that fall into the ‘weird and wonderful’ category. Some you’ll never use, but others may prove inspirational.

Finally, there’s Halls & Churches. As the name suggests, this majors on large‑scale reverbs, with less emphasis on the bizarre, though it’s more than just a collection of pristine choral and orchestral recording rooms. There are quite a few impulse responses that seem to be based on hall settings from vintage digital reverbs, and others that are treated or gated in various ways.

The new version of HOFA’s reverb completely puts to bed any idea that convolution has to be sterile, inflexible or limited to producing authentic halls and spaces. IQ‑Series Reverb V2 is endlessly malleable and bursting with character.