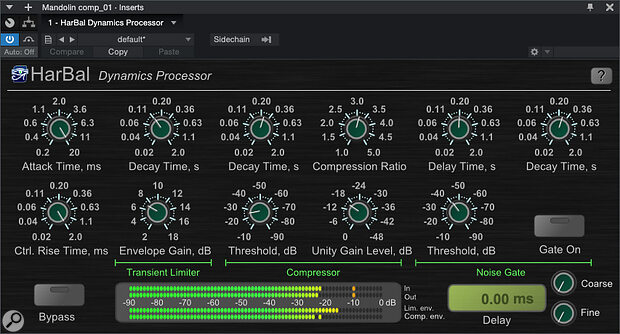 Think you’ve heard everything a compressor can do? It might be time to think again...

We now take ‘match EQ’ functionality for granted, but Paavo Jumppanen’s Har‑Bal software was doing it over 15 years ago! Har‑Bal is still in development — and v3.7 remains perhaps the most sophisticated implementation of the ‘match EQ’ concept — but Paavo has also been developing other innovative audio tools, the most recent being Har‑Bal Dynamics Processor, a Mac/Windows plug‑in available in VST and AU formats (there’s currently no AAX version).

Har‑Bal Dynamics Processor is a four‑stage processor, whose third stage is its most conventional: a noise gate with adjustable Threshold, Decay time and Delay (hold) time. This is effective, if rather unsophisticated, lacking things such as hysteresis controls or the ability to attenuate rather than mute the signal when the gate closes. The fourth, equally simple stage is a delay that is adjustable from 0‑50 ms in 10µs steps. It’s intended for time‑alignment, for instance to ensure that drum close mics play nicely with overhead and room‑mic, and works well, with the Coarse and Fine controls making it easy to dial in precise delay times. There’s no polarity switch, though, and it would be nice to have Eventide’s Precision Time Align ability to display delay times as samples or distance travelled at the speed of sound.

The real meat of Har‑Bal Dynamics Processor is found in its first two stages: a ‘transient limiter’ and a compressor, both rather unusual. The flow chart in the online documentation makes the schematics of the Space Shuttle look straightforward but, as far as I can tell, the idea is that both respond to a single dynamic ‘envelope’ derived from the source signal, but shaped by the Attack Time and Control Rise Time. The second of these, in effect, governs the slew rate of the control signal or, to put it another way, the permitted ‘steepness’ of the envelope. The compressor and limiter also have separate Decay Time controls, and the compressor has fairly conventional Ratio and Threshold parameters. The amount of limiting is set using the Envelope Gain control, which in practice seems to be a threshold, with lower settings producing more limiting on transients. Gain reduction is compensated for using the Unity Gain Level control (it’s not a standard make‑up gain, and does nothing if you set the compression ratio to 1:1).

Getting your head around how Har‑Bal Dynamics Processor works, including how the limiter and compressor interact, can be challenging. So, although I don’t often find dynamics plug‑ins’ presets that useful, in this case they’re helpful: they illustrate how you might use some features. I still haven’t reached the level of expertise where I can set things exactly how I want without some trial and error, and there are some styles of compression or dynamic control that I’ve not yet figured out how to implement. Also, it allows you to set implausibly fast attack and decay times, and will cheerfully distort if you do.

If ‘compression as an effect’ is your thing, this plug‑in offers possibilities I’ve not heard elsewhere.

The flip side of that is that if ‘compression as an effect’ is your thing, this plug‑in offers possibilities I’ve not heard elsewhere. On drums, some settings seem almost to invert the dynamics of the original, and the ability to take the compressor Threshold as low as ‑90dB opens up new vistas of sound‑mangling. For example, I used an unusual ducking effect that I couldn’t recreate using any other plug‑in to turn a snare track into a fairly plausible room mic. In this context, the noise gate becomes an interesting tool too.

On other sources, the transient limiting can be surprisingly effective at ameliorating the unwanted side‑effects of close miking, such as exaggerated vocal consonants or pick attack on guitars. It enables you to achieve an unusually smooth sound which, again, I’ve not heard elsewhere (although sometimes it seemed to generate a ‘chattering’ effect on low‑level spill).

I probably wouldn’t want this to be my only compressor, but in a world where other developers compete to offer the most convincing recreations of 50‑year‑old analogue hardware, Har‑Bal Dynamics Processor offers something genuinely fresh and different.

A sophisticated dynamics processor that’s capable of some unique results.