Badged PCs — What's In A Name? 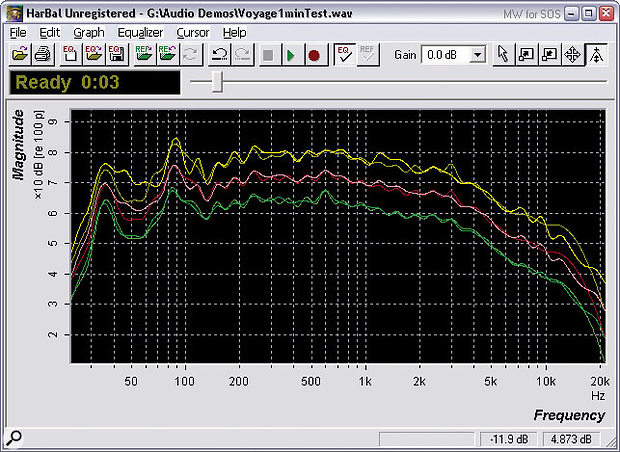 If you want your tracks to sound similar to commercial productions, Har-Bal goes a lot further with 'EQ ripping' than ever before.

Many laptop PCs that bear a specific brand name are not in fact manufactured by the company in question — and that includes some specialist music PCs. But does this really matter to the musician?

I've noticed a few people grumbling on the SOS Forums that specialist music retailers are simply selling 're-badged' laptop PCs rather than manufacturing their own. Actually, if you look more closely at the laptop market you'll find loads of different companies selling identical-looking models, but with different brand names, specifications and prices. There's nothing unusual about this practice, but it's perhaps understandable that many people are confused about so-called laptop 'clones'.

The reason for their existence is that there are actually only a few ODM (Original Design Manufacturers) making laptop carcasses — the motherboard, case, and integrated display. They distribute their products to OEMs (Original Equipment Manufacturers), who add their choice of processor, hard drive, CD or DVD drive, RAM, operating system and accessories, set it up in a particular way to suit their target market, stick their label on it, and then submit it to varying amounts of testing before selling it with their own guarantee and level of technical support.

So while some companies (such as Acer, Apple, Asus, IBM and Twinhead) do manufacture their own laptops, many others (including Compaq, Dell, Hewlett Packard, and Toshiba, plus a host of large retail chains with 'own name' brands, and a selection of specialist music retailers who advertise in SOS) have laptops in their range that started life as ODM models.

However, if you buy a laptop from a specialist music retailer, you get the reassurance that its power management functions, earthing arrangements, hard drive performance, FireWire and USB controller chips, plus its overall performance, have been thoroughly checked for suitability with a wide range of audio and MIDI applications, to avoid any expensive revelations after purchase. The fact that plenty of other well-known companies have also found a particular carcass suitable for their needs doesn't make it in any way inferior.

Described as 'the World's First Visual Mastering System', and created jointly by HDQTRZ Digital Studios in the US and TAQUIS (Australia), Har-Bal (Harmonic Balancing) is a PC-only, stand-alone application that consists of a spectrum analyser followed by a 8192-point linear-phase digital filter. It aims to provide the final polish in the mastering chain when used after multi-band compression, but before any final limiting, by matching the EQ of an existing file to one of a selection of reference responses for differing styles of music.

It differs from Steinberg's FreeFilter in that it offers a far more flexible way of manipulating EQ, by tracking both the average and peak spectrum levels of the song, and by providing A-weighted compensation for perceived loudness changes, so that the EQ'd and original version can be more easily compared. I was impressed with the downloadable 8-bit demo version, and hope to review the full version shortly. The software supports bit depths up to 32, at any sample rate, and currently costs just $99.95. A plug-in version is promised in due course.

One of the largest ODMs is Taiwanese company Clevo, whose desktop-replacement laptop carcasses are extremely popular with OEMs, and according to my investigations are being used by (among others) AJP, Alienware, Eurocom, Fosa, Hypersonic, Mesh, M-Tech, Promedion, ProStar, Sager and Voodoo. Given the particular requirements of the PC musician when it comes to a laptop, it's perhaps not so surprising that Inta, Millennium, Philip Rees and Red Submarine all have Clevo carcasses in their computer ranges. If your laptop was bought from one of these companies, and has a label underneath proclaiming it to have a Clevo 5620D carcass, here's a tip. It will probably apply to quite a few other P4 'desktop replacement' laptops too.

You've probably noticed that by default the processor power is throttled when you switch from mains to battery power. Throttling is the ability of the CPU to switch between idle and full-speed modes at high speed, and looks to the user like a decrease in clock speed, leading to lower power consumption. The P4's Thermal Control Circuit (TCC) is normally used in automatic mode to switch the clock speed in a 50 percent on/off duty cycle (allegedly two microseconds in each state), which protects the processor from overheating and burning out when it approaches its preset thermal limit.

However, if you're running a Cubase song with 30 percent CPU overhead and the default 50 percent Throttle Duty Rate setting, according to my measurements processor overhead will increase to about 70 percent as soon as you unplug the power supply. If you don't mind a shorter battery life, you can change this behaviour inside the BIOS, in the 'Intel Developed Advanced Menu' section of the Advanced page. The Clevo 5620D provides four settings in its BIOS — 50, 37.5, 25, or 0 percent — and the last will disable throttling altogether, so your music-application CPU overhead won't change at all when you switch to battery operation.

Changing from 50 percent to zero percent won't halve your battery life either, as you might expect, since CPU throttling is not as efficient as lowering the working voltage of the processor (like SpeedStep technology). If you do want full-speed operation and a longer time away from the mains supply, buying a second battery and fitting it in drive bay one will almost double battery life. 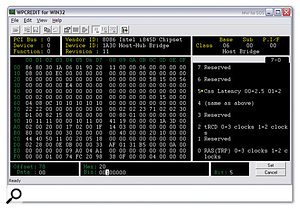 You can use the WPCREDIT utility to reduce the latency of your system RAM from within Windows, which may provide a small increase in overall performance.With most laptops there's little to tweak in the BIOS, but here's how to adjust the CAS latency of your system RAM from 2.5 to 2 for a possible small boost in overall performance. This tweak should work with any laptop or desktop PC using an Intel 845E chipset. First you need to download H. Oda's excellent freeware WPCREDIT utility (www.h-oda.com), which I first mentioned in SOS December 2002. You also need a suitable PCR file with details of the 845 chipset registers; I eventually discovered one in the chipset-related drivers section of the www.mods4me.com site.

Use the 'PCR Open' menu option to load this file, click on the 'Yes' option in the subsequent query, navigate to register offset $78 in the main display area, and then click on the Edit button to change its value from $00 to $20 (see accompanying screen shot). If you find this helps overall performance, the associated WCPRSET utility (again downloadable from www.mods4me.com) will automate this register change each time you start Windows. You'll also find various other interesting registers by scrolling through the WPCREDIT display, but don't try changing them unless you really know what you're doing, since it's easy to crash a PC in this way.

CRT monitor screens need to be updated many times per second to maintain the illusion of continuous motion in games, and the faster this refresh rate, the less will be the perceived level of flicker. Few people ever bother to experiment with the refresh rate of their PC monitors, but it's well worth seeing if it makes any difference, not only to picture quality but possibly also your health. Some people, particularly those with epileptic tendencies, can suffer from long-term headaches if their CRT refresh rate is set lower than about 75Hz, while a few may perceive screen flicker below 100Hz, and may even reduce screen resolution to achieve a faster refresh rate.

To change the refresh rate, you need to launch the Display applet, then click the Advanced button on its Settings page to visit its inner sanctum. The drop-down box for choosing a different refresh rate can normally be found on either the Adaptor or Monitor pages. If you select the Optimal setting it should automatically choose the highest refresh rate supported by both your graphics card and monitor, at the current screen resolution and colour depth.

Fortunately, flat-screen LCD monitors don't suffer in the same way as CRT monitors, since their screens are not updated line by line, top to bottom, many times per second. Instead the active matrix display is continuously on, so the typically-used 60Hz refresh rate is perfectly adequate.

While Windows 98 and the rest of the 9x family are relatively modest when it comes to RAM — even on my '98 Review' partition stuffed with software I've only had to allocate 2GB — Windows XP and its applications tend to be more greedy. However, while many musicians and specialist music retailers routinely create a 10GB or 20GB partition for XP and its applications, I've never found it necessary to allocate that much. That's partly because I use a multi-boot setup, so my general-purpose applications are installed in a different partition from my music ones, but also because when installing soft synths and samplers, I always install their instrument and sample libraries into a separate partition, so I can access just one set of these files from my '98 Music', '98 Review', 'XP Music', and 'XP Review' installations. Many of you may still be running Windows 98SE and Win 2000/XP partitions side by side, so the same reasoning could apply to you.

Because I take this approach, I've been happily using 2GB for my slimmed-down 'XP Music' partition and 2.5GB for my well-stuffed 'XP Review' partition for the last seven months, but I had to increase them both slightly this month, to 2.5GB and 3.5GB respectively. I did this 'on the fly', using PowerQuest's Partition Magic, but given the unknowns in both the Windows XP activation process and in application copy-protection when changing partitions in any way, I thought I'd report back on my findings.

Fortunately, both instances of Windows XP were quite happy to survive re-sizing without asking for reactivation, although, strangely, when I rebooted after the changes each gave me a 'Windows has finished installing new devices' message, followed by an instruction to reboot. I also noticed that the Auth.log file relating to my Pace Interlok-protected software had an updated date stamp after the changes, although the Waves plug-ins it referred to carried on as normal.

Pace Interlok protection is even supposed to survive a reformat, as long as you continue to use the same computer and hard drive. Apparently it may generate a new challenge string, but as long as you ignore this and re-enter the original response string that you received for your previous challenge, it should accept it, either on a Mac or a PC. My Waves plug-ins certainly survived me both moving and then re-sizing the partition in which their authorisation was installed, although I'd personally be a lot happier if it were stored within an iLok smart key, and therefore completely immune to any changes I make to my hard drives, as well as being portable.

My biggest concern were Spectrasonics' Atmosphere and Trilogy, and the AAS Lounge Lizard, which use proprietary copy protection. For obvious reasons, details of particular developers' proprietary copy-protection schemes are often sketchy. However, these also survived the partition changes, so I can cautiously say that you should be OK resizing partitions containing protected software. You should also, in most cases, be able to restore an image file created with Norton's Ghost or PowerQuest's Drive Image without losing your protection, as long as the hardware remains the same ’Äî ie. that you restore onto the same PC on which you originally installed the software.