If you like Izotope's Ozone mastering processor so much you want to use it at the mix, their new Alloy is the plug‑in for you. 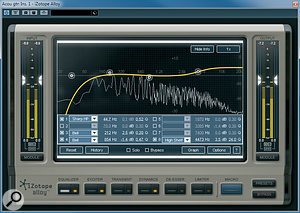 SOS readers will be very familiar with Izotope's Ozone 4 plug‑in, which is undoubtedly one of the best DIY mastering processors on the market. Many users like it so much that they also employ it at the track or bus level, despite the fact that it's not designed for this application. Izotope have taken notice, and have adapted some of Ozone's functionality into a separate product called Alloy, which is aimed at mixing rather than mastering.

Like Ozone, Alloy's processing is divided into six separate modules, which can be placed in any order. The EQ, Exciter, Dynamics and Limiter modules are based on their equivalents in Ozone but tailored for track/bus-level processing. Two new modules have been added: a De‑Esser and a Transient Shaper, the latter designed for altering the character of percussive sounds such as drums or the attack of a strummed acoustic guitar. The Dynamics module actually has two stages, which can be placed at different points in the signal chain to run in series or, by dragging one above the other, used in parallel. This is very easy to configure, and I suspect that regular readers of Mike Senior's Mix Rescue columns might wish to take note! 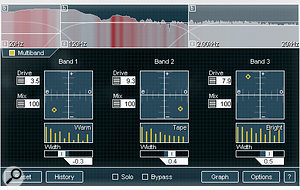 Many of Alloy's processors, including the Exciter, offer multi‑band modes.

Alloy's EQ provides up to eight bands, with bell, high‑pass, low‑pass and high/low shelf options all included. Operation is very similar to Ozone's EQ and the level of control is extremely detailed, so whether you need to add a little gentle sparkle or notch out a narrow troublesome frequency range, Alloy is up to the task. The algorithm is designed to model analogue‑style EQ filters and, to my ears at least, is superior to many of the generic EQ plug‑ins built into most mainstream DAWs.

The Exciter module operates in either single or multi‑band mode, with a Width control providing additional options to enhance the stereo imaging. Something new, compared to Ozone, is the X‑Y pad for each band, which allows the type (even or odd) and number of harmonics to be adjusted. The miniature Harmonics Graph located beneath the X‑Y pad summarises the style (Transistor, Tape, Tube, Warm or Bright) and number of harmonics being generated. These parameters interact with the more familiar Drive and Mix controls to adjust the overall effect.

The Limiter is a fairly simple affair, offering both brickwall and 'soft' modes, which does its job in a reasonably transparent way, providing it is not pushed to extremes. More detailed control of level is provided by the Dynamics module. As indicated above, this is actually two identical modules; each can be used in single‑ or multi‑band mode, with up to three bands in each module. All bands offer a gate/expander and compressor, with familiar threshold, ratio, attack and release controls. Other features include choices between vintage (analogue‑modelled) or digital processing modes, and soft/hard‑knee compression styles.

When the two modules are used for parallel processing, the crossover frequencies between the three bands are locked together so that changing the crossover in one module will automatically change it in the other. This avoids phase issues and helps maintain audio quality when processing in parallel. When they are used in series, the crossover frequencies of the two dynamics modules can be adjusted independently. If your DAW supports it, Alloy also offers side‑chain inputs, allowing the dynamics of one track to be controlled by levels on a second (for example, ducking the level of a bass guitar when the kick drum is playing). I had no problems configuring this within Cubase 5 and it worked a treat. In all, Alloy provides a powerful and very flexible set of options for automated control of dynamics.

Alloy's Transient Shaper is more comprehensive than most similar plug‑ins. A common task for this module might be to add some snap to a drum loop or submix. Increasing the Attack setting enhances the initial attack portion of the sound, which is great for bringing out the initial click of a kick or snap of a snare, while reducing the Sustain level can help reduce any unwanted room ambience. Using the multi‑band mode allows you to focus in on the attack of the kick, snare or cymbals independently. The module works just as well in single‑band mode when applied to material such as a strummed acoustic guitar or an individual drum mic.

The key feature of the De‑Esser is the ability to define the frequency range that controls when the de‑essing takes place and then to decide whether the processing is applied to all of the audio or just the specified frequency band. The latter allows you to apply the processing a little more aggressively before any obvious artifacts are introduced. 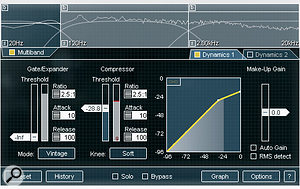 There are two Dynamics modules, each of which can operate in multi‑band mode if required.

Like Ozone, Alloy's comprehensive feature set offers enormous sound‑shaping possibilities, but requires time and effort to fully master. Fortunately, Izotope have implemented the excellent Preset Manager and Macro control systems from Ozone 4 in Alloy. The supplied presets are organised into categories for different tasks — vocals, drums, guitars, and so on — and these provide suitable starting points for almost any task. Some of these presets I found instantly addictive: the vocal 'Upfront & Crisp' preset, for example, struck me as an ideal starting point for a modern pop vocal, while the 'Tighten Up Drums' preset does exactly that. One click of the Macro button brings up a screen containing just the key controls for that preset, providing an easy route into basic preset editing.

In addition to the headline features, Alloy also has lots of nice little touches. For example, Alt‑clicking within the EQ module allows the mouse to be used to focus on a particular frequency without changing any of the actual EQ settings, which is great for identifying a problem frequency for processing. Shift‑clicking on one of Alloy's sliders, meanwhile, allows you to A/B compare between two settings.

No matter what I threw at Alloy, it was difficult to fault the quality of the processing. Indeed, probably the biggest problem I faced was the rather seductive temptation to keep tweaking. As with DIY mastering, regular use of the bypass button is required, for a reality check to ensure the processing is actually improving matters.

Perhaps the only down side is that all this processing comes at a CPU price. The more modules you engage, and the more of those you use in multi‑band mode, the higher the load on the host system. Even so, I was able to run a reasonably busy mix with five or six instances of Alloy, plus a convolution reverb and a range of other plug‑ins, without my test system getting into too much of a sweat.

There are no obvious holes in Alloy's feature set, and it certainly offers some sophisticated sound‑shaping tools. It takes some learning, as does Ozone, but the effort is definitely worth it. Maxed out, it is quite demanding on the host computer, but I suspect that most users will target key tracks or buses in the project that need something special. For more routine tasks, the standard plug‑ins within your DAW will continue to get the job done, but for those key tracks, Alloy is one heck of a tool. Its features are seductive and I could easily see it becoming a 'go to' plug‑in for a whole range of creative or corrective uses. Not a casual purchase, perhaps, but highly recommended.

There are numerous channel‑strip plug‑ins available in native formats and on dedicated DSP platforms such as TC Powercore. For a run‑down of some of the obvious competition, Mike Thornton's Pro Tools column from January 2007 (/sos/jan07/articles/ptworkshop_0107.htm) is worth a look. Equally, URS's Classic Console Strip Pro, reviewed in March 2008 (/sos/mar08/articles/ccspro.htm), is worth considering.

Alloy does for track/bus processing what Ozone does for mastering. Another excellent processing tool from Izotope.