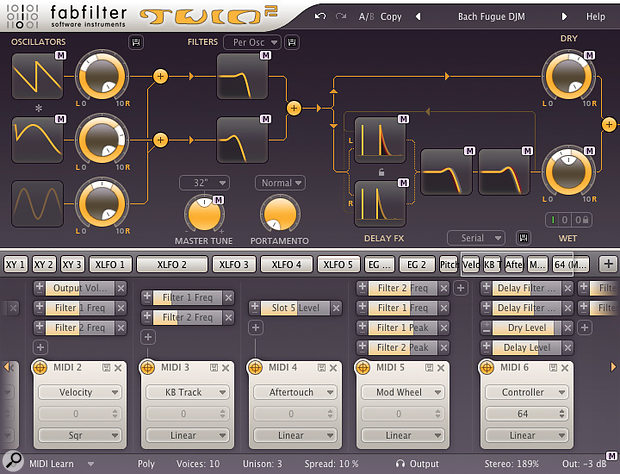 The extensive modulation options available in all the FabFilter plug‑ins are augmented in Twin 2 by X‑Y pads.

FabFilter's Creative range comprises three plug‑ins. Timeless 2 is a tape‑delay emulation, Twin 2 is their take on a virtual analogue synth, and Volcano 2 is a powerful multi‑mode filter. All three are heavily based upon FabFilter's, er, filters — and their highly flexible modulation architecture — but used in different ways.

FabFilter are clearly proud of said filters, given that they named the company after them! And perhaps they have reason to be proud, given the extremely flexible nature of the filters in question. As well as having low‑pass, high‑pass and band‑pass types and selectable slopes of 12, 24 and 48 dB/octave, you have the choice of 11 different 'characters': FabFilter One, Smooth, Raw, Hard, Hollow, Extreme, Gentle, Tube, Metal, Easy Going and Clean.

There's no description of the technical differences between these, but they do provide a number of variations in tone, and these are fundamentally good‑sounding filters, whatever option you choose. I compared them to some of my other favourite filter plug‑ins: on some sources the differences were clear, but on others I wouldn't have been able to decide between them. One thing I did notice early on is that the distortion/overdrive part of the filter kicks in at quite a low input level, meaning that if you are looking for clean filtering or just a little 'edge' you really do have to be careful about your input levels. Given the fiery name, I imagine this was part of the design brief for Volcano.

They're Giving Me Modulations

Extensive modulation capabilities are par for the course now, but some implementations are cryptic, at best! Some companies use a virtual patchcord system, and while this is pretty foolproof, it can also get untidy, particularly on a small plug‑in window. So how do you offer multiple modulation options while still keeping things visually tidy? One possible answer lies in FabFilter's brilliantly titled 'What You Use Is What You See' system, which is also common to all three plug‑ins in the Creative suite. Modulation routing is handled in a section towards the bottom of each plug‑in window, which is scrollable, left to right, should you need it. Depending on the plug‑in, you can add up to 30 modulation sources into this area, each of which can be patched to up to eight destinations for each source. To attach a source to a destination, you click and drag from the source's 'drag' button to the destination using a visual patch cable. This disappears once you have chosen the destination, to be replaced with a horizontal slider showing the destination name, which controls the modulation amount. To the right of this slider, a drop‑down list shows all available destinations, should you decide to change the routing. Additionally, you can reverse the polarity of the modulation by using the ± button to the left of the slider, and switch it off using the bypass button in the top right corner of the 'slot'. A particularly neat touch is that the actual modulation amount sliders are modulation destinations in their own right!

FabFilter have kindly provided us with all the things we would expect to be available as sources, and taken them a step further. For instance, their X‑LFO can act both as a conventional oscillator or a step sequencer with up to 16 steps. If you set only two steps, one at maximum and one at minimum, and adjust the glide control, you can have either a sine or square wave (or something in between), but you can also add additional steps as you please, up to the maximum of 16, even setting the steps as random values. The humble LFO has come a very long way indeed.

There are two envelope generators: a pretty standard ADSR envelope with the addition of a threshold control, and an envelope follower with attack and release controls. Finally, there is the MIDI source option, which allows you to use note velocity, pitch‑bend wheel, modulation wheel or any MIDI Continuous Controller as a modulation source.

Now let's look at the plug‑ins themselves. Twin 2 (shown in the opening screenshot) is inherently the most complex, being a fully fledged synthesizer, so this is where the FabFilter modulation system really shows what it is capable of. Structurally, the synth is a standard virtual analogue with three oscillators offering triangle, sawtooth, square and sine waves, plus white and pink noise, two filters switchable between series, parallel and one‑per‑oscillator configurations, and a delay section that can also double as a chorus/flanger. There is a pulse‑width control and a sync control that allows oscillator sync effects without the need for another oscillator and, finally, you can set up ring modulation between oscillators one and two.

The oscillators sound very clean and alias‑free, even at extreme settings. My only possible complaint would be having to use one of the three available oscillators as a noise source. I would have preferred a separate noise source, although that wouldn't have the flexibility that using an oscillator as a noise source gives. We have already covered the filters, so let me just add that the filter 'drive' makes a lot more sense to me in the context of a synth rather than in a stand‑alone effect.

Finally, we have the dual delays. These can be set either to sync to MIDI clock, to be freely adjustable or to be set to 'ultra short', in which case the delay time is adjustable between 0.1 and 50 milliseconds for flanger and chorus effects. Two filters can be used to shape the wet component of the delayed sound, again in series or in parallel, as you choose. There are separate controls for dry and wet levels and the panning of each.

The modulation section is as described previously, with the addition of an X/Y pad that allows the control of two parameters with a single movement of your mouse: typical example would be filter cutoff on the 'X' axis and resonance on the 'Y' axis. At the bottom of the plug‑in window are the 'master' controls for mono/poly mode selection, number of voices of polyphony, unison Voice and Spread. When the unison Voice control is set to 1, there is no unison effect, but increasing it (to up to 32) adds to the depth and 'fatness' of the sound. This can be further enhanced by the Spread parameter, which increases detuning between the voices. The Stereo control ranges from 0‑200 percent, with 0 being mono and 200 being 'widened stereo'.

The included presets do give a very comprehensive overview of what Twin 2 is capable of... so what does it sound like? A Minimoog? An ARP? Or a Prophet? It doesn't sound like any hardware original, but it was never meant to. I own quite a few 'classic' synth emulations and they all have their place, but while Twin 2 may not have any particular vintage attributes, it does sound like itself. And that's a compliment. The sounds can vary from thin and reedy through big and wide, to downright rude and offensive, so it's a very flexible synth.

With all their fluctuations of time (and consequently pitch), subtle distortion and high‑frequency roll‑off, tape‑style delay effects are de rigeur for many producers. Timeless 2 aims to replicate these traits, but it also goes beyond what you can normally expect. Delay times are selectable as either 'free' times between 5 and 5000 ms, or locked to MIDI clock, with ranges from 16th notes to half notes. In this mode, the delay‑time control becomes an offset parameter, which will multiply the chosen note value by a factor between a half and two. There are feedback controls for each channel and a pan position control, after which the signal is fed into — you guessed it — those fab filters! Again, we have serial, parallel and 'per channel' settings, and the same dry and wet volume and panning controls. 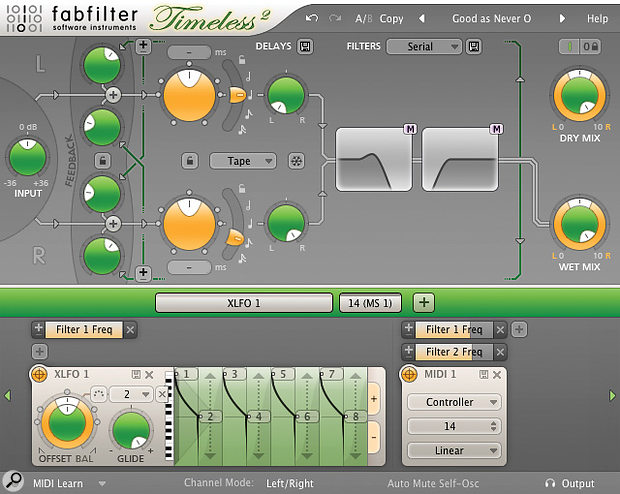 A stereo Timeless 2 delay effect showing the powerful X‑LFO being used in a creative way.

Without any drive or saturation from the filters, Timeless 2 sounds clean and clear, but driving the filters a little really does go a long way towards recreating the grit and grunge of a real tape delay. Add some gentle low‑pass filtering and a little delay‑time modulation and you get pretty close to the classic tape‑delay sound. But there's more. Start modulating the filters with a step‑sequenced X‑LFO pattern, choose appropriate delay times, and you are able to create very rhythmic stereo patterns from a single, short source sound. When you change the delay time, the pitch of the delayed signal changes, just as it does with a real tape delay, so with a bit of work you can create pitched arpeggios! (There is also the option to use a 'stretch' mode, in which the pitch of the delayed sound doesn't change with delay time.)

As well as the expected dub delay effects, some of the presets lend themselves to those droning and metallic deep‑space‑alien‑in‑a‑mine background sounds, while others sound more like record scratching! It's certainly worth browsing through a few of these and taking a few moments to see how they have been constructed because, just by listening, it isn't always obvious. Either way, prepare to get lost in a world of blissful, dubby, droning strangeness.

Version 1 of Volcano was reviewed in the July 2005 issue (/sos/jul05/articles/pluginfolder.htm) so rather than go over the basics again, I will just highlight what's new. First, the number of filters has been increased from two to four and, as we've seen, the number of 'characters' available has grown from the original four to the current crop of 11. There is now a much greater number of filter routing options, and also new are the modulation matrix common to all three products and the improved and homogenised user interface.

I tested the filters on several different sources and in different ways and I can only reiterate what I said before: the sound has bags of character, is often dirty and is pushed easily into self‑oscillation. The preset designers have also done a great job of showcasing the possibilities here. I was particularly impressed with some of the 'vocal filter' presets, which could transform an otherwise flat synth-pad sound into a strange singing alien monk! A little gem was using a random LFO to modulate the delay time with no actual filtering, which actually changed the pitch of the sound, giving tape‑like wow and flutter. Not what I expected at all! 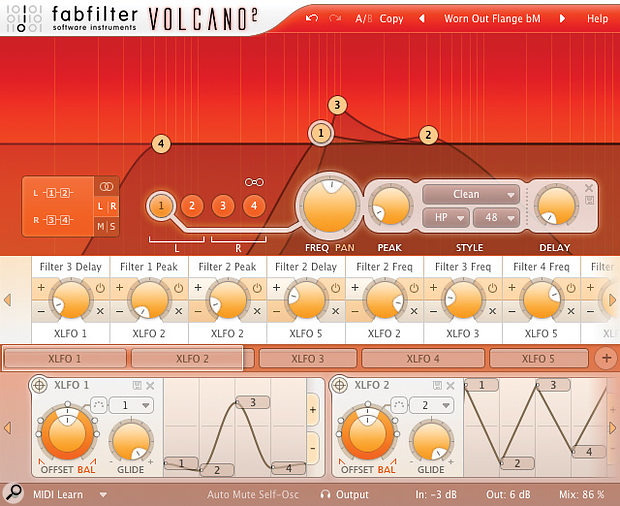 In this Volcano 2 patch, multiple X‑LFOs are routed to different parameters, resulting in very complex motion of the filters.

The thing that strikes me about all of these plug‑ins is how much thought has gone into developing the modulation system and the filters themselves. These developments, while not revolutionary are — to me — certainly evolutionary improvements. I would say that each of them brings something new to my plug‑in folder, as they do have a strong identity of their own. The flip side of this is that, without some restraint, it is very easy to take things too far and end up with totally dominating sounds, so a little care needs to be taken when pushing them hard.

All FabFilter plug‑ins are available for both Mac and PC, in all the common formats (VST, AU and RTAS). When you buy one of the plug‑ins on‑line, you'll be emailed a licence key, which you simply enter when prompted.

Three great‑sounding plug‑ins that offer plenty to the experimenter, a very good selection of presets for the rest of us to tinker with and, especially if you buy the Creative Bundle, very good value for money.