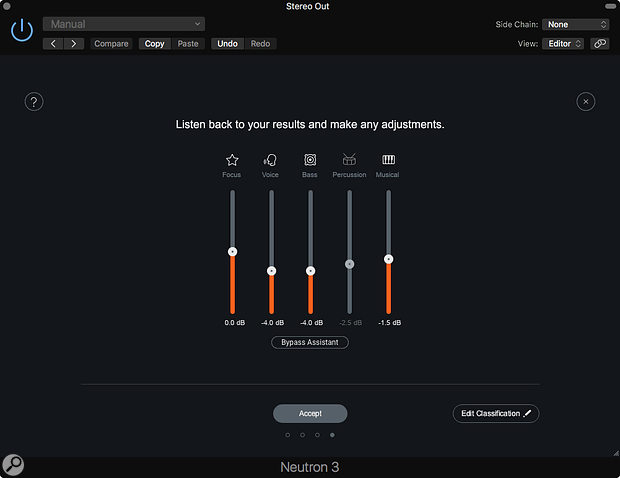 The new Mix Assistant's Balance process assigns all of your tracks to one of five categories and automatically adjusts their levels within those categories: you can then change the overall mix balance using just five faders.

iZotope's AI-based plug-in suite grows ever more intelligent with the addition of an automated mix-balancing tool.

iZotope's Neutron is a suite of mixing and mastering plug-ins with a difference, the difference being the use of artificial intelligence to help you make decisions about what processing to apply. If you're not already familiar with Neutron, it's worth checking out SOS's reviews of versions 1 (January 2017) and 2 (May 2018) for a complete overview.

Like earlier versions, Neutron 3 can pinpoint masking issues, as well as suggesting suitable processing for individual tracks and for sweetening the overall mix — but it goes further than they did, thanks to a new automatic Mix Assistant (only included in the Advanced version), which can help establish an initial balance for a stereo mix.

While the machine-learning technology used behind the scenes must be seriously advanced, iZotope have put a great deal of effort into keeping the user interface as straightforward as possible, with on-screen prompts to help you follow the correct workflow. Nevertheless, there are still so many 'moving parts' that referring to the various tutorial videos can save a lot of time when scaling the learning curve. The software has been optimised to help minimise CPU load and to speed up graphic redraws, but if your session is already close to the edge, running a Mix Assistant balance analysis might just push it over.

Neutron Advanced comes as a suite of plug-in modules that includes the individual processing plug-ins, the Neutron 3 'Mothership' itself, an updated Visual Mixer (which displays simultaneously all Relay levels, shown vertically, and their pan positions, shown horizontally) and a module called Relay that is deployed in each of the tracks or submix buses in your mix so that it can monitor levels and also impose level and pan changes. As before, the individual processing modules can be used as separate plug-ins, or they can be combined within the Neutron 3 plug-in. Neutron 3 would normally be instantiated in the master mix bus for establishing an overall mix balance, whereas if you were using the Track Enhance feature, an instance would need to be instantiated on each track that you wished to treat.

As for the modules themselves, Neutron 3 sees a new Sculptor module added to the existing Compressor, Equaliser, Exciter, Gate and Transient Shaper. Sculptor seems to belong to the same school as Soundtheory's Gulfoss or Zynaptiq's Intensity, insomuch as it applies programme-dependent real-time adaptive dynamics and EQ processing, but in this case the processing is based on feedback from Neutron's Track Assistant. A library of instrument types and an Amount control help the user guide it, and a dynamic EQ curve shows how the EQ spectrum is being modified in real time. 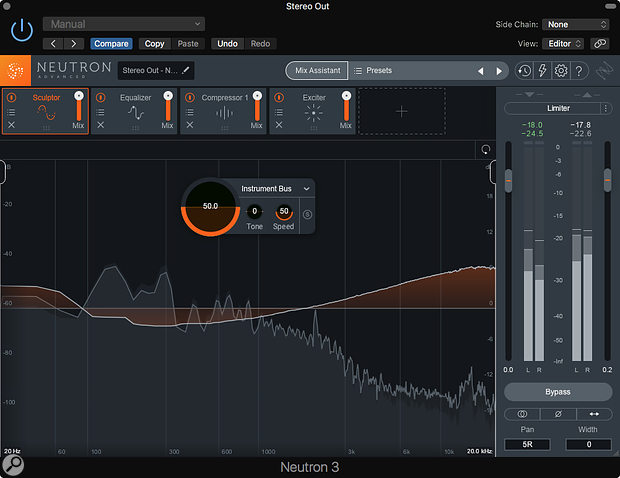 The new Sculptor module is a clever multiband dynamics processor.

Mix Assistant works by communicating with instances of the Relay plug-in deployed on the tracks or buses to be controlled. It can learn what your mix is doing to help balance a whole mix; then, using Neutron 3's Track Enhance mode, you can set up processing to sweeten your final mix. As the existing features have been covered in some depth in our earlier reviews, I'll focus here on Neutron 3's ability to 'listen' to your project and then set up a mix balance for you.

The general process for setting a balance is to deploy the necessary Relay plug-ins on the channels or buses and to leave the channel faders and pans at their default positions. The instructions suggest putting Relay in the first plug-in slot and leaving all faders set to their default positions. However, some of the plug-ins you may be using, such as compressors, can cause level changes, so I asked iZotope whether in that case it might be better to put Relay at the end of the processing chain. Their reply was that it is best to start with a clean slate and add further processing after a balance has been achieved, but that if you have already deployed plug-ins of your own, it is OK to put Relay after them.

I was impressed both by how well Neutron 3 identified the various track sound sources, and also by how well it set up its mix balance

Clicking on Mix Assistant in Neutron 3 gives you a choice of Track Enhance or Balance. After selecting Balance, you'll be prompted to play the track through from start to finish so that Neutron 3 can do its analysis. Before doing this, you can opt to tick boxes to indicate the tracks that you wish to be the main focus of the mix. In a typical pop song this might just be vocals, but you can tick multiple boxes if there are multiple key elements. However, you can't apply a ranking by saying, for example, vocals come first but piano is second most important.

When the process is complete, you'll be greeted by a set of five faders labelled Focus, Voice, Bass, Percussion and Musical, which set the levels of the main mix elements as determined by Neutron 3. If the project contains a large number of tracks, this can really save time in getting an initial balance, as everything is reduced to no more than five faders. A Bypass button lets you check before-and-after mix balances, and there's an Edit Classification button that lets you alter the way Neutron 3 has categorised your tracks. Moving the faders will rebalance elements of your mix by controlling the faders within the various instances of Relay, leaving your DAW channel faders in their original positions; after you've pressed Accept to move on, you can make further changes to your mix by adjusting individual Relay faders within the Visual Mixer, or using your DAW's own controls. Note that Mix Assistant doesn't decide on panning for you: this can be changed either using your usual DAW controls or using the Visual Mixer to operate the pan controls in Relay. 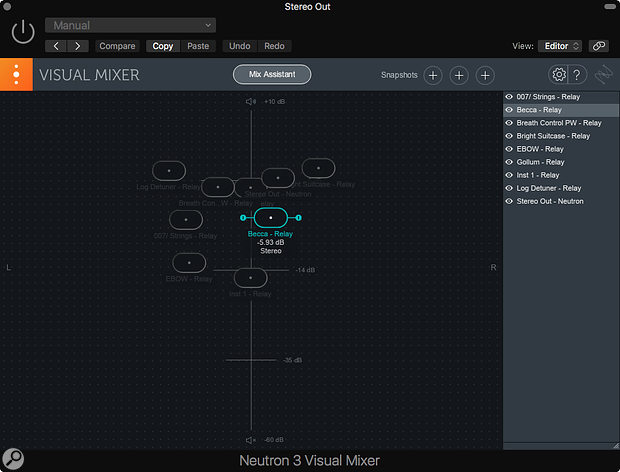 The Visual Mixer provides an overview over all the tracks in your project that have the Relay or Neutron plug-ins inserted.

To achieve predictable balance results, Mix Assistant should be used to target individual DAW tracks or submix buses but not both, and it shouldn't be used on aux sends or effects return buses. You also need to be prepared for a drop in overall level as Mix Assistant sets a new balance, though you can always make that up when mastering if you need to. In a very busy mix, it might be an advantage to bus everything first and then put instances of Relay on the buses rather than on individual tracks just to avoid things getting too unwieldy; of course, this means you have to balance whatever is in each group manually, so which way you go depends on how you want to work.

Once you have a balance you're happy with, you can then run the Track Enhance process in Mix Assistant. This will give you a choice of three 'tonalities' and three 'intensities': make your choice, and Neutron 3 will insert a chain of plug-ins for you and set their parameters.

If you insert Neutron 3 onto individual tracks and select Track Enhance, then pick from a menu of sound characters, it will build custom presets for individual tracks, again with Track Assistant talking to other Neutron plug-ins in your session. As with the automatic balancing feature, you may still need to fine-tune the results, but in most cases, the process gets you into the right ballpark very quickly.

Elsewhere, Neutron's Masking Meter has been upgraded to fit a one-window display and has smoother metering, but works much as before, with orange shaded areas showing where masking is taking place and solid orange blocks appearing at the top of the window when the masking become serious enough to demand action. There's now an inverse link so that you can simultaneously boost EQ on one source while cutting the same area on another. As before, the aim is provide a visual aid so that the user can locate and eliminate competition between elements of a mix, rather than simply doing it all for you.

The Tonal Balance Control plug-in remains much as it was in version 2: a visual equalisation spectrum tool that enables you to compare the frequency spectrum of your mix against one of three reference 'target curves' designated Orchestral, Modern and Bass Heavy. If your mix spectrum sits inside the shaded area, you're somewhere close to a 'good' frequency balange. There's also a Crest Factor read-out. Tonal Balance Control is able to communicate with the equalisers within all instances of Neutron 3 (and, if you have it, Ozone 8), and if you click 'Select a plug-in' at the bottom left of the screen, the desired plug-in opens in the lower half of the window, enabling you to make adjustments on individual channels while viewing the target spectrum display. Again as before, you can either view the spectrum as a continuous line or as energy in four frequency bands.

I was impressed both by how well Neutron 3 identified the various track sound sources, and also by how well it set up its mix balance. Mixes always include a degree of artistic latitude, so you may want to tweak some things as well as adding effects, but as a solid starting point the results are impressive, even when the music you are mixing might be a little out of the ordinary. For example, my own mainly instrumental chill music was treated very effectively, leaving me with very little tweaking to do. It is also worth mentioning that the new Sculptor plug-in is effective in bringing mixes into focus without making them sound processed.

When applying overall mix processing, I couldn't find a means to set a target LUFS level, which would have made the automatic mixing process even more effective, but in most cases the sonic character of the overall mix was definitely nudged in the right direction, and you can always adjust the final mix level manually to achieve the desired loudness. Using Neutron to sort out processing for all the tracks in a busy mix can be heavy going, but it can really help if you target tricky areas such as vocals, bass and drums. Even if you gravitate toward doing more things manually, the masking displays can help even the most experienced engineer home in on problem frequencies. (If you feel that Neutron 3 is something you're likely to use a lot, setting up a blank song template with Neutron 3 and Relay plug-ins already in place will save a lot of time.)

Overall, Neutron 3 does what it claims to do remarkably well, and even though an experienced engineer might do things a little differently, the results don't disappoint as long as you accept that you might have to make a few manual changes to reflect the artistry of the song. Mix Assistant also turns out to be very easy to use once you've run through the procedure a couple of times, so if you find setting up a mix balance challenging, Neutron 3 could be your new best friend.

iZotope's approach to assisting with mixes is unique, so although you can find alternatives to various parts of Neutron 3, such as the included plug-ins, there's no direct competitor that I'm aware of for the whole package.

Neutron 3 is a very sophisticated package that helps the inexperienced user or professional in a hurry to set up mixes that need very little extra work to finish them.