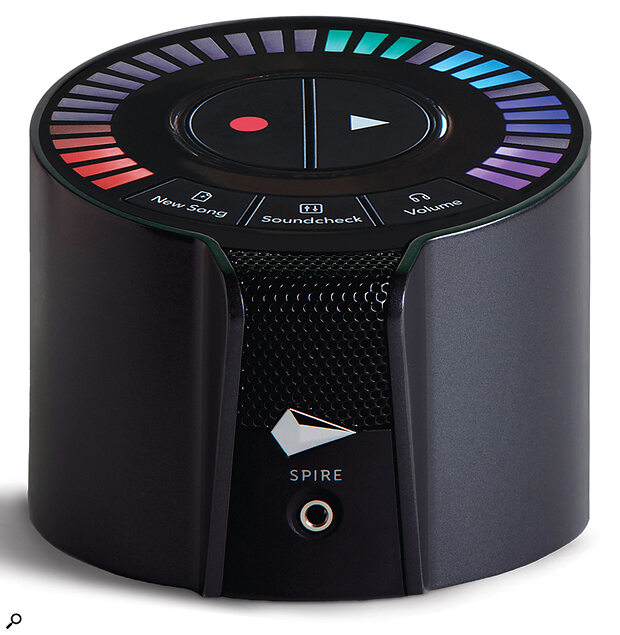 iZotope’s clever Spire Studio is back and better than ever!

In the June 2018 issue of SOS we took our first look at iZotope’s Spire Studio, a gadget used in conjunction with an iOS/Android tablet or phone to drag the Portastudio concept into the 21st Century. Spire Studio is a portable eight‑track digital recording system, complete with effects, and you can record via its built‑in omni microphone or via a pair of combi jack/XLR connectors. There’s also a headphone socket and 48V phantom power.

V2 has an improved LED display plus preamp upgrades and up to eight hours recording time. Bluetooth is used to speed up the Wi‑Fi setup configuration and the battery has also been upgraded. A 5V DC PSU drives the Spire and recharges the battery. Recording and playback (48kHz/24‑bit) is possible without resorting to external software, though the app is needed for mixing. iZotope’s AI and FX technology is built in to help produce polished mixes.

The Soundcheck automatic setup function is now available in the standalone app rather than just the hardware, setting your record levels and also identifying the type of voice or instrument and shaping the tone accordingly using technology from Neutron and Nectar. Free cloud sharing from the app allows you to import beats and download complete mixes or individual tracks along with lyrics and notes. You can also record using the mic in your phone. Carried over from the original version is the visual mixing concept where you drag the sound sources around a soundstage to change their levels and pan positions, and the effects section has been expanded.

Another change is the addition of the optional Spire Pro subscription‑based app (free for the first six months), which adds some of iZotope’s restoration technologies including noise removal, a de‑popper, auto pitch‑correction and Personalised Soundcheck automatic voice optimisation, as well as a choice of 50 royalty‑free beats. You need to be connected to the internet for Spire Pro to render these processes, which means disconnecting from the Spire unit until you hit Apply, then you can reconnect. The iOS Spire Pro app (but not yet Android) may also be used as a standalone recorder for your phone. Spire Pro also has a random Inspire Me feature that adds iZotope effects to any track including reverbs, flangers, chorus and distortions from iZotope Trash.

Spire may be based on the Portastudio paradigm but it offers way more sophistication.

Spire is musician‑friendly and prompts you at virtually every turn. The Pro additions are probably the most useful if you don’t have an acoustically dead space to record in or if low‑level background noise is an issue. Having auto pitch‑correction is useful for general polishing or for creating more extreme effects, but if you like the old‑school approach, the standard app, a couple of duvets and a separate popshield may be all you need.

The second‑generation hardware upgrades and enhancements to the free app are very worthwhile and because the various effects and processes are based on existing iZotope technology, the quality is impressive. As a confirmed DAW user, I was a little sceptical of the Spire approach but it turns out to be very friendly and capable of excellent results. Having algorithms make tone‑shaping decisions for you can be a little unnerving but there’s still the option to make manual adjustments. For working on the move, there’s always the option of exporting tracks and finishing off your mixes in your DAW.

Spire may be based on the Portastudio paradigm but it offers way more sophistication. If I’d seen this back in my early four‑track days, I would have thought I was witnessing magic.