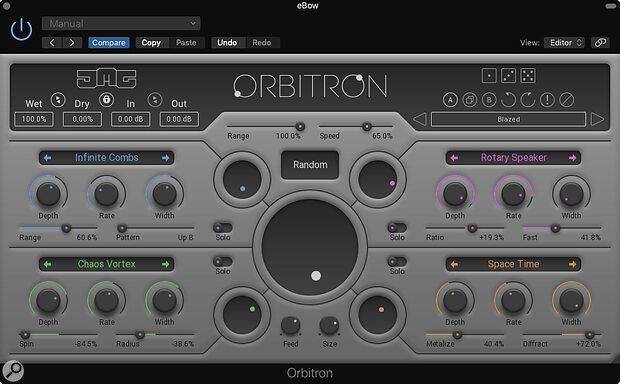 Marketed by United Plugins and supporting all mainstream plug‑in formats, JMC Orbitron can run up to four modulation algorithms simultaneously, and they can all be blended to taste with the main circular X/Y control. Each of the four sections, with its own smaller circular display, can load one of 12 modulation effects, so there’s scope for some really interesting results, but you can also choose to load a single effect when you have more conventional modulation needs!

Two horizontal sliders and three knobs control the selected effect. The faders change function according to the effect that’s loaded, whereas the knobs always control Depth, Rate and stereo Width. When Depth is set to zero, the effect is bypassed to conserve CPU resources. The effect of Depth and Rate is shown by a spinning coloured dot in that effect’s small circular display. Width sets up differences in the left and right channels to create a sense of stereo spread, in most cases by adjusting the relative phase of the modulation. Solo does what you’d expect and again saves on CPU.

So, I hear you ask, what modulation types are there? Cosmic Chorus is a four‑voice chorus with delay and feedback (Inject) for each voice, with a Disperse parameter randomising the delay times. Vintage Chorus has two voices, with a Warm function adding saturation and Analog some random variation. Super Chorus allows you to specify the number of voices, and has adjustable Tone.

Tape Flanger has variable saturation and a doubling option, to mix in a second flange voice with a longer delay and a 50‑percent faster modulation rate. For Future Flanger the Scream control adds feedback and Stasis simultaneously increases the delay time while decreasing the modulation range. Phat Phaser has controls for Complexity, which selects the number of delay lines used, and Talk, which brings in positive or polarity‑inverted feedback.

Infinite Combs uses modulated comb filters to create the illusory Shepard tone effect, which gives the impression of the sweep continuing to move in one direction: Range sets the minimum and maximum frequency of the combs, while Pattern selects the direction of movement. Liquid Filter, on the other hand, uses sweepable HP and LP filtering with adjustable resonance, and the Morph parameter adjusts how the modulation affects the filters. Kinetic Resonator is another resonant filter effect, with modulating frequencies inside a feedback loop; both the filter Type and Feedback amount can be varied.

Chaos Vortex is a multiband Doppler effect that creates the illusion of spinning: Spin offsets the speeds for the bands, while Radius adjusts the distances between bands. For more conventional spinning, there’s also Rotary Speaker, with Ratio adjusting the speaker spacing and Fast increasing the speed. Finally, Space Time is a multiband processor with modulated delay taps, with Metalize adjusting the feedback network and Diffract shifting the delay values.

Orbitron can run up to four modulation algorithms at the same time, and they can all be blended to taste.

To combine the effects, the centre sections can be used as a virtual joystick: just place the dot for the desired blend. There are four ways to control this, the mode being selected in the text box above the circle. Spin syncs to the DAW tempo and the time is set in bars. Free spins at a constant, free‑running rate, while Random does as its name suggests — but, importantly, it does so smoothly. Manual can be used to set up a static mix, or one you automate using your DAW.

The Range slider above this sets the overall depth of mix modulation. Below the main circle, Feed is one knob you’ll want to use with caution, as it feeds the signal from the previous effect into the input of the next one, and so on: turn it up too far and you get dub‑style runaway oscillation! Size adjusts the delay times for the feedback loops.

There are presets to help you get started, and some dice options for randomising settings too, but really this is a very simple plug‑in to work with. Its results are mainly subtle and musical, one of the main benefits being that as the modulation mix is continually changing, you don’t get the same repetitive cycling that’s often heard from single effects. Overall, then, Orbitron offers a simple way to add smooth modulation textures to just about any sound source and it’s well worth trying out.