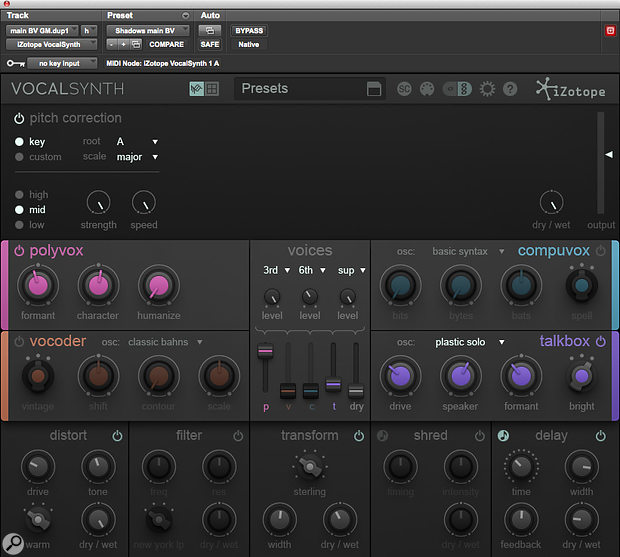 Is VocalSynth the natural choice for unnatural vocal sounds?

The latest release from Massachusetts-based iZotope is VocalSynth. Intended as a versatile ‘one-stop’ plug-in for creating the sort of futuristic vocal sounds often heard in modern EDM, it offers the ability to generate multiple harmonies, alongside a rack of four signal-shaping ‘vocal engines’.

Using the panel’s simple drop-down menu to select up to three harmonic intervals, the user can balance the levels of the harmonies before sending them on to the first of VocalSynth’s four ‘vocal engines’, the Polyvox module. This is, in essence, an effects chain, through which the resulting harmonic blend can be ‘humanised’ and subtle adjustments made to formant and character. The other three engines, meanwhile, can be deployed individually or in conjunction via a rack of volume controls.

The Vocoder engine does what it says on the tin and a little more besides, offering a variety of vocoder types and synth patches with control of additional variables, and is the place to start for those seeking to emulate the robotic vocal sound heard on Daft Punk’s ‘Around The World’. Those seeking the kind of retro-futuristic vocal sound typified by Kavinsky’s ‘Nightcall’ should head to the Compuvox engine, which synthesizes digital speech via a choice of more synth patches, with intelligibility-enabling control over variables including vowel length. The Talkbox engine offers a choice of talkbox emulators and control of harmonic distortion, compression and vocal formant.

Beyond its four engines, VocalSynth offers a variety of options to filter, distort and delay the vocal signal, and — again, characteristic of the comprehensiveness of iZotope’s plug-ins — further extras such as pitch correction. I found the Transform processor’s variety of impulse-response options especially useful in finessing a given vocal engine effect, while engaging the plug-in’s pitch-correction option and playing with a subtle degree of distortion and filtering tended to be rewarded with an attractive result.

Of course, VocalSynth needn’t only be used to transform your lead vocalist into a French-House-chart-bothering robot. Applied more subtly, some of the array of effects within the vocal engines can add an interesting sonic shade to an otherwise ‘natural’ vocal. As a starting point for this subtler use, I particularly liked the ‘Silky Smooth’ preset, which, when backed off a little, can add a glossy quality to a backing vocal or lead-vocal double.

For those seeking such a subtler approach, VocalSynth’s automation options are deep enough to enable a remarkable degree of control. The user can, for example, automate the formant, character and ‘humanise’ elements of the Polyvox engine to effectively create unique, precision-accurate filters of one’s own, and, deployed in conjunction with VocalSynth’s array of processing effects, automating just one of these features can radically alter the character of the resulting output.

If all this weren’t enough, some praise is also due for the unfussy simplicity of VocalSynth’s interface, which could hardly be any more intuitive and straightforward, inviting a ‘dive straight in’ approach abetted by some great presets. The only real grounds for criticism are equally applicable to most other ‘extreme’ vocal processors: the intelligibility of the lyric can be affected, and there is a tendency for the results to sound a little samey if you’re not careful, especially where heavy pitch correction is involved. Overall, though, with its impressively wide range of audio manipulation possibilities, its user-friendly precision control and its sonically impressive processing, VocalSynth is a triumphantly comprehensive voice-synthesizing plug-in.

A terrific multi-functional voice-synthesizing plug-in that’s a pleasure to use.