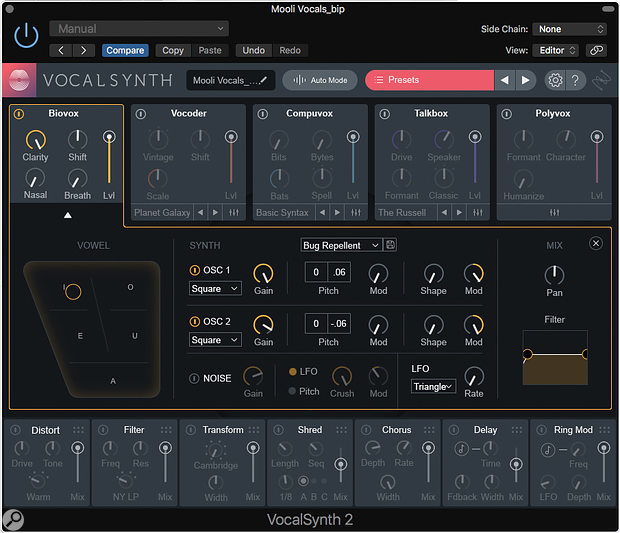 VocalSynth 2 incorporates numerous additional features, and there is an upgrade path for existing users who want to move up. All the usual Mac OS/Windows plug‑in formats are supported. Existing users will notice that the GUI has been redesigned, with the processing engines now arranged along the top of the window and the effects chain along the bottom. In the centre is an attractive, dynamic ‘swirly whirly’ display which iZotope call Anemone. This provides visual feedback on the processing, but the interaction goes both ways, as handles on the display can be used to adjust the relative contributions of the active processing sections. 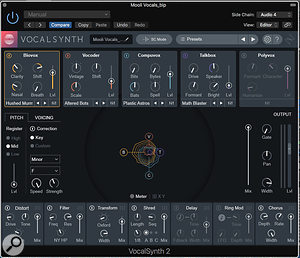 A neat meter displays the contributions of each VocalSynth processor.The four original ‘engines’ — a classic 10‑band Vocoder, the Compuvox vocal‑sound synthesizer, an emulation of a ‘dribbly tube in the mouth’ Talkbox, and Polyvox, for simulating multiple vocal layers — are still present and correct, but they are now joined by Biovox, which applies throat and vowel modelling to the synth or side‑chain input. A palette of vowels can be opened up to the left of the synth controls, and careful use of automation can yield very rewarding results when controlling these. The Vocoder, Compuvox, Talkbox and Biovox engines operate in parallel, with faders used to mix their outputs. The mixed signal then passes through the Polyvox section if this is activated, and a master wet/dry balance control.

A box to the left of the Presets window allows the user to select Auto, Side‑chain or MIDI modes, whereupon DAW‑specific setup instructions appear. In Logic, the plug‑in can be inserted on an audio track for use in Auto or Side‑chain mode, or it can appear as a MIDI‑controlled effect within an instrument track. The ‘faders’ icon at the bottom right of each engine window is used to expose the drop‑down synth section, the high‑ and low‑pass filters and any engine‑specific editing controls. Any combination of processing engines is permissible, though Polyvox is disabled in Side‑chain mode.

The built‑in effects have had a shot in the arm in v2, with the Distort, Filter, Transform, Shred and Delay sections now joined by Chorus and Ring Modulator. It’s also now possible to drag effects modules around to re‑order the processing chain. The original Shred effect has been updated and acts as a kind of sequenced chopper which can create rhythmic sounds; the user can set up three different tempo‑sync’ed chop rates, which are switched in sequence according to a choice of preset patterns.

The pitch‑tracking elements within VocalSynth 2 are, quite understandably, happiest when the vocal or instrument track used as a source is free from effects or unwanted spill. To my ears, VocalSynth 2 preserves intelligibility noticeably better than the original — unless you don’t want it to, of course — and those new sections add hugely to its sonic palette, with plenty of scope for serious sonic damage if that’s your thing. There are some dramatic effects to be had by using the 100 percent wet signal, while mixing in a bit of the dry signal is often useful if you need something more subtle, and I soon came to appreciate the new Biovox engine; judicious use of the Breath control can add an intimate sense of breathiness to the sound. The only issue I encountered was that when you use Shred on vocals or other smooth sounds, the abrupt chopping can cause clicky transitions. Maybe adding a smoothing control would help here?

I found the Transform section handy for changing the overall tonal character, as it offers a choice of IR filters to process the signal; likewise, having high‑ and low‑cut filters in each processing module helps in smoothing or thinning out the sound where needed. The new ring modulator can add a very subtle LFO‑style modulation when used sparingly and, at higher settings, it can also produce that ‘Dalek in a car crusher’ effect you’ve always dreamed of. I was surprised how sweet the new chorus effect sounded too.

The presets offer a degree of instant gratification, and creating your own effects is not difficult as the designers have gone to great lengths to make the GUI as intuitive as possible. The end result always has an electronic, synthetic quality to it, so this probably isn’t the first tool you’d reach for when tweaking natural‑sounding vocals, but if you feel the need to get more adventurous, there’s a lot of scope here.

The new GUI and added features make VocalSynth 2 a major improvement over the original version.